Why Am I Endorsing Hillary Rodham Clinton for President in 2016? 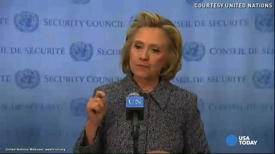 Paul Krugman endorses Hillary Rodham Clinton--or, rather, endorses the Democratic Party and her as its overwhelmingly-likely standard bearer:

...read significance into what she says or doesn’t say about President Obama, endless thumb-sucking.... Please pay no attention. Personality-based political analysis is always a dubious venture.... Pundits are terrible judges.... We were assured that George W. Bush was a nice, affable fellow who would pursue moderate, bipartisan policies.... There has never been a time in American history when the alleged personal traits of candidates mattered less.... Each party is quite unified on major policy issues--and these unified positions are very far from each other....

I guess we might learn a few things--Where will Ms. Clinton come out on trade agreements like the Trans-Pacific Partnership? How much influence will Republican Fed-bashers exert? — but the differences between the parties are so clear and dramatic that it’s hard to see how anyone who has been paying attention could be undecided even now, or be induced to change his or her mind between now and the election.

Everything Paul says is 100% correct.

Nevertheless, it is better when one can say that not just is the party the best party, but the candidate is the best candidate.

If you cannot, you sound too much like the Democratic worthies of 2008, saying: "Obama is very smart, very well-versed in public policy, gives a great speech, and has a proven record since he was 21 in working across the aisle and assembling unlikely coalitions. It is true that he does not have a lot of experience in government per se. But the Democratic team that did so well at governing while staffing the executive branch from 1993-2000 will back him up, and compensate for any deficiencies." That has been largely true. But that was a gamble--albeit one at rather good odds.

Or, worse, you sound much too much like the Republican worthies of 2000, saying:

George W. Bush is... a good face-man to talk to Wharton graduates. But you are really voting for the highly-competent Team Bush: Jim Baker, Dick Darman, Roger Porter, Michael Boskin, Martin Feldstein, Brent Scowcroft, Colin Powell, Condi Rice, Donald Rumsfeld, Dick Cheney, and company. Think of yourself as voting for Team Bush, and you can be very happy.

That too was a gamble, and I would have said--I did say in 2000--that it was a gamble at not unfavorable odds, even though my view of the competence of Team Bush was much less optimistic than the view of others. But that gamble went catastrophically wrong.

And as I look at Hillary Rodham Clinton, I find myself thinking--even though up until a decade I would have and did place her worse than well back in my list of potential Democratic presidential candidates--that: Yes, this is the best candidate on offer, from the perspective of her governmental experience and fitness for the presidency.

Why have I changed my mind?

Let me start by quoting myself from 2008:

The arguments against Hilary Rodham Clinton are:

The response to (1) for both [Obama and Clinton] is by this point very convincing: both have now demonstrated an ability to run an excellent political campaign. Running a successful presidential political campaign is not the same thing as governing a country. But both have demonstrated substantial administrative competence over the past two years. Neither has betrayed the moral failure of telling big lies or making themselves hostage to special interests in the way that, say, George H.W. Bush did--and thus crippled their presidency in advance....

The Hilary Rodham Clinton who made such an administrative mess of health reform in 1993-1994 could not have run the campaign she has run over the past two years. Thus I am now confident that either has a reasonable shot of being in the top 20% of American presidents.

The response to (2) is that the policy differences are incredibly minor.... As Matthew Yglesias wrote somewhere I cannot find right now, both campaigns are magnifying their policy differences on health care and Iraq in order to have something to talk about.

And as for (3), it is also not a consideration. The Republican Party is very good at the politics of personal destruction, and the press eats it up--no matter who the Democratic candidate. When draft-dodger Dick Cheney can impugn the patriotism of WWII bomber pilot George McGovern without any journalistic pushback--well, we already knew that America's Washington village journalists are completely without honor. And we already knew that the only Republicans with honor are those who are openly and publicly committed to the radical transformation and reform of their party...

That seems to look pretty good to me even now. But how would I update it?

...She did it extremely well--plowing away on committee assignments and upstate New York economic development teams, earning praise from senior members on both sides of the aisle and the grudging respect of a press corps she was boring to tears.... The period... most clearly demonstrates that despite her difficulties courting positive media attention and her distaste for soaring oratory, she's a formidable politician who excels at the aspects of the job that don't involve giving speeches....

She co-sponsored bills on minor subjects with Republicans. She worked tirelessly on penny-ante economic development schemes for upstate New York.... Clinton played the role of earnest legislator so well that in 2006 there was chatter that maybe she would run for Senate majority leader rather than President.... As long as she was a senator, she was going to be a good senator by Senate standards. And she was. Clinton has developed, at times, a reputation for being a 'bad' candidate or 'bad' at politics... not as good at informal public riffing as her husband or as proficient at big set-piece speeches as Obama. But there's a lot more to politics than public speaking. And Clinton excels at all those more private aspects. She lined up support... in a state she'd never lived in... wooed and impressed senior US senators... cleared the 2016 field of all rivals. This is not the kind of stuff that is easy or dramatic for the media to witness and relay, but it's a crucial element of real world politics....

'I got it wrong': Clinton on Iraq: 'I thought I had acted in good faith and made the best decision I could with the information I had,' Clinton writes in her post–State Department memoir, Hard Choices, 'and I wasn't alone in getting it wrong. But I still got it wrong. Plain and simple.' That's Clinton on her 2002 Iraq vote....

Clinton's Political Rebirth at State: The key move... she agreed to become Obama's secretary of state.... Clinton had won most Democrats back by losing--and losing gracefully. But capturing the political class would be a much tougher trick.... For four years, Clinton was at Obama’s side--or promoting his policies in Washington and foreign capitals... showed herself to be a loyal foot soldier to Obama.... Clinton's behind-the-scenes work on the Affordable Care Act.... The Copenhagen climate summit in December 2009 was a watershed moment.... Clinton was a force for Obama on Capitol Hill, helping secure needed Republican votes for a new arms-reduction treaty with Russia and getting top Democrats to ensure that a new Iran sanctions law didn't preclude the president from negotiating... a strong advocate for the raid that killed Osama bin Laden.... Meanwhile, her husband... showed deference to Obama.... His speech slicing up Mitt Romney and Paul Ryan was the most memorable at the Democratic National Convention in 2012, and he hit the campaign trail hard for Obama and Democratic congressional candidates that fall....

At this point, she has been a successful Secretary of State, ran an almost-good-enough presidential nomination campaign, and been an effective Senator. And she was an ineffective policy-development presidential assistant back in 1993-1994. That's more experience in more different roles with more success than Barack Obama had had, than George W. Bush had had, than Ronald Reagan had had, than Jimmy Carter had had, and than John F. Kennedy had had when they faced the electorate. That's successful experience in more different roles than Bill Clinton had had. And it's about equal in variety--and greater in success--than George H.W. Bush had had.

And it's vastly more than the Republican candidate will have, whoever he may be.

The only thing that could keep me from putting her at the very top would be if she has not reflected on and determined to avoid what made her so unsuccessful as health-care policy-development czar in 1993-1994.

But I know she has.

Why Am I Endorsing Hillary Rodham Clinton for President in 2016?

Paul Krugman endorses Hillary Rodham Clinton--or, rather, endorses the Democratic Party and her as its overwhelmingly-likely standard bearer:

...read significance into what she says or doesn’t say about President Obama, endless thumb-sucking.... Please pay no attention. Personality-based political analysis is always a dubious venture.... Pundits are terrible judges.... We were assured that George W. Bush was a nice, affable fellow who would pursue moderate, bipartisan policies.... There has never been a time in American history when the alleged personal traits of candidates mattered less.... Each party is quite unified on major policy issues--and these unified positions are very far from each other....