Department of "Huh?!": Noah Smith Claims the British Economy Today Is Not in a Keynesian Slump

Over at Equitable Growth: Real production in Great Britain is far below what we thought back in 2007 it would be today if British growth proceeded according to trend: 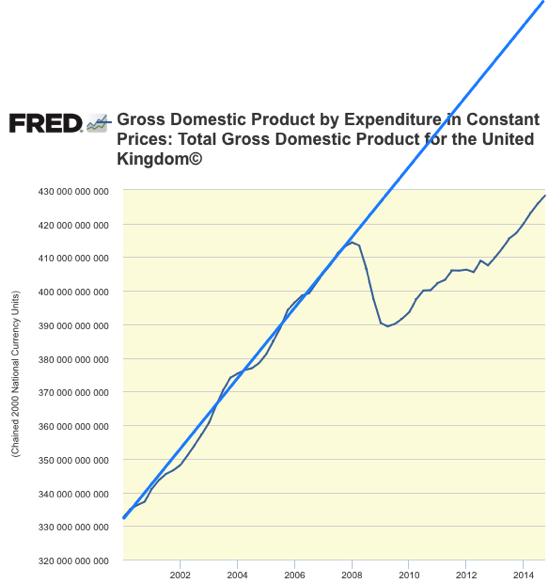 There are no signs looking at wages and prices that this is due to any adverse supply shock--that the reason production is so much lower than expected is not because aggregate demand has fallen short of potential output, but because something bad has happened to destroy the productive potential of the British economy: 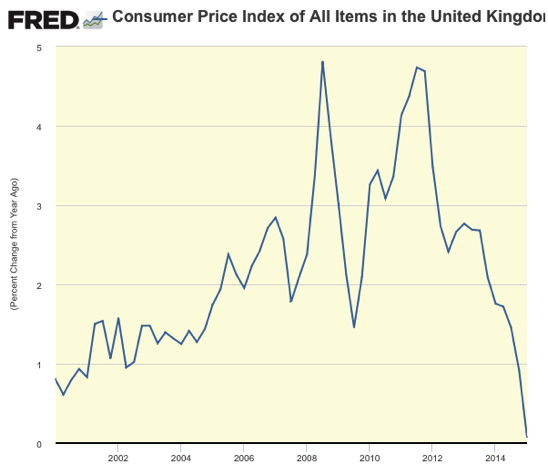 Thus there seem to be no reasons looking at wages, prices, and output to believe that the British economy right now is a full-employment at-capacity-utilization economy. And only in such an economy would monetary and fiscal policies that boost spending simply boost prices and not production.

Noah Smith: U.K. Election Isn't a Win for Austerity: "Whatever they are, the U.K.’s troubles don’t look very Keynesian...

...Austerity is unlikely to cure the British economy, but there’s not much reason to think fiscal stimulus would either...

Why does he say that fiscal stimulus is likely to be counterproductive? Because usually a depressed sub-potential economy has depressed employment as well, and the British economy does not: Does the fact that the employment share of British adults is actually high mean that the British economy is, in fact, at potential output? That stimulative monetary and fiscal policies risk rising inflation for no gain? And that it is time to normalize? Certainly Mark Carney at the Bank of England does not believe that is so: 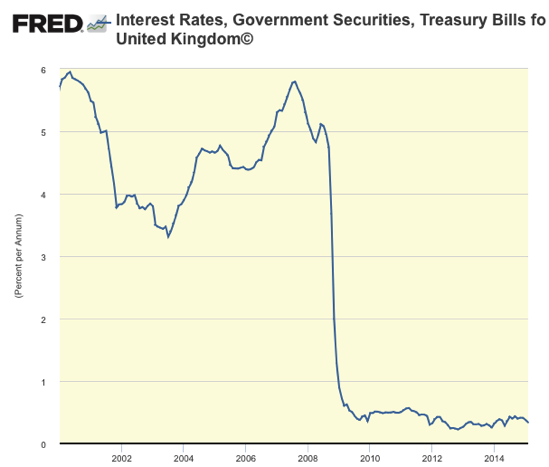 The pickup in output growth of the past two years had been largely met by a significant reduction in slack in the economy, particularly in the labour market, rather than by any increase in productivity. Although there was considerable uncertainty about the remaining extent of labour market slack, it was unlikely that activity growth could be maintained at its current pace for long, without generating greater inflation in wages and prices, in the absence of some material improvement in labour productivity...

The key phrase is: "considerable uncertainty about the remaining extent of labour market slack". That means:

We do not understand how the labour-market indicators we monitor are consistent with both the output figures and the readings we have on wage and price inflation. The wage and price data suggests to us that there has been a sharp rise in desired labor-force participation since 2008 that has accompanied a collapse in labor productivity. But we find such a steep rise implausible. And we do not understand what might have produced it.

From my point of view, why so many Britons have taken so many low-pay low-productivity jobs in the past three years is a mystery. But that they have gives us little reason to think that the British economy is now a full-employment at-capacity-utilization economy in which aggregate demand is now equal to potential output.

Department of "Huh?!": Noah Smith Claims the British Economy Today Is Not in a Keynesian Slump

Over at Equitable Growth: Real production in Great Britain is far below what we thought back in 2007 it would be today if British growth proceeded according to trend: