Comment of the Day: Charles Steindel: Monday Austrian-Economists Smackdown: The "Hangover Theory" of the 2008-2009 Crash Fails Because of Timing: "Yes, the housing slump started well before the actual recession...

...We've now had nearly a decade of lackluster levels of homebuilding. The population is, what, 20 or 30 million larger? Why don't we see a housing boom? Regional differences? (Demand up in crowded metro areas where there are a lot of barriers to building?). Financial constraints? Underwater owners not selling and blocking development? Are these enough to explain it, or is there something else?

It is simply bonkers: 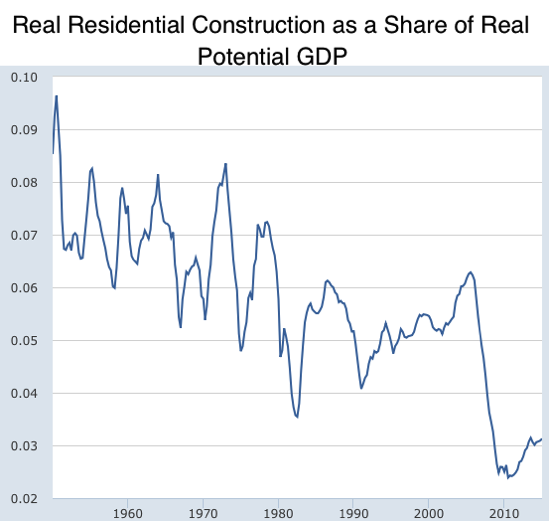 You try to do the normal thing and draw sensible long-run supply- and preference-driven trends for the share of the economy devoted to building houses and apartments, starting with an underhoused America at the end of WWII that then sees the housing stock converge to its steady-state ratio to potential GDP: 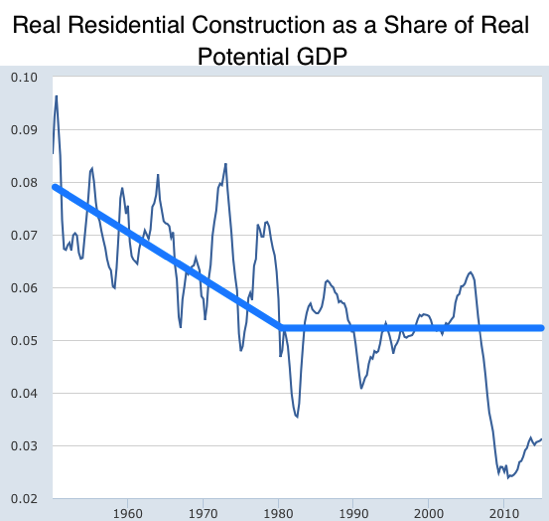 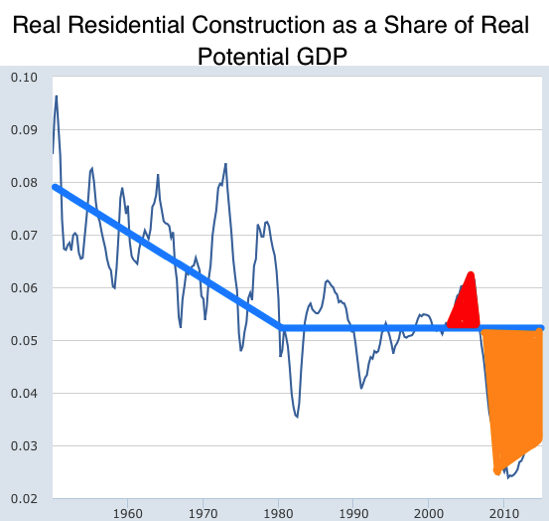 The housing boom is a triangle with a base four years long, a height of 1%-point of GDP, and thus an area of 2%-point-years of GDP. the post-2007 housing bust is--so far--a quadrilateral with an area of 14%-point-years of GDP. Relative to what we would reasonably have forecast in 2000 or so, America is now underhoused by 12% x $16 trillion = $1.9 trillion worth of houses.

Clearly there has been a big shift in both banks' willingness to make mortgage loans and in household's willingness to risk losing their--or their parents'--money by risking it as a down payment. What the welfare-economics consequences of the fact that America is now--relative to post-WWII trend experience--grossly underhoused has not been properly analyzed. Nor has there been proper analysis of how and whether policies should be applied to try to reverse this housing drought.

Comment of the Day: Charles Steindel: Monday Austrian-Economists Smackdown: The "Hangover Theory" of the 2008-2009 Crash Fails Because of Timing: "Yes, the housing slump started well before the actual recession...