Across the Wide Missouri: What would "civil disobedience" against the Supreme Court's ruling in Obergefell even mean? What does Mike Huckabee want his people to do? Run up to people's weddings and interrupt them? Grab people's marriage licenses and rip them up?

STEPHANOPOULOS: So what exactly are you calling on people to do right now? You say resist and reject this judicial tyranny. Spell out exactly what that means?

HUCKABEE: George, judicial tyranny is when we believe that the courts have a right to bypass the process of law and we've really seen it this week in two cases, in both the Obamacare case, which Justice Scalia called it - said we not - should call it SCOTUScare because they have rescued it twice, ex cathedra to the law, and then in the same-sex marriage ruling in which -

STEPHANOPOULOS: So are you calling for civil disobedience?

HUCKABEE: I don't think a lot of pastors and Christian schools are going to have a choice. They either are going to follow God, their conscience and what they truly believe is what the scripture teaches them, or they will follow civil law. They will go the path of Dr. Martin Luther King, who in his brilliant essay the letters from a Birmingham jail reminded us, based on what St. Augustine said, that an unjust law is no law at all. And I do think that we're going to see a lot of pastors who will have to make this tough decision. You're going to see it on the part of Christian business owners. You'll see it on the part of Christian university presidents, Christian school administrators. If they refuse to...

STEPHANOPOULOS: What about county clerks? Should they issue same-sex marriage licenses?

HUCKABEE: If they have a--a conscientious objection, I think they should be excused. I'm not sure that every governor and every attorney general should just say, well, it's the law of the land because there's no enabling legislation. For the states who have a constitutional amendment that affirms marriage, as has been affirmed by the courts for 135 years since the ratification of the 14th amendment, right up through the first time we've seen same-sex marriage enacted by any state, which was Massachusetts, in many states you have overwhelming majorities of the people who voted to say that they believe marriage is between a man and a woman. George, what we've done--let me just ask people on the left. If we get a future court that is conservative and that conservative court decides that this was a mistake and we're going to go back to traditional marriage and we're also going to say that every unborn people is in fact a person and is--is absolutely guaranteed due process and therefore we would strike down the idea of abortion from conception forward, is the left going to be OK to let the Supreme Court make that decision?

STEPHANOPOULOS: So let me--let me ask you this.

HUCKABEE: Because based on the response this week, I think they have to say, yes, that's fine when five lawyers on the Supreme Court make that decision, we're OK with it.

STEPHANOPOULOS: So, you're president today. Let's assume that for a second. Would you refuse to enforce this decision?

HUCKABEE: I would say when the Congress provides enabling legislation and the people's representatives vote and it gets to my desk, then we'll consider it. We've seen, though, something that is - I find very interesting. When the president lit up the White House the other night with rainbow colors, I guess that's his prerogative. If I become president, I just want to remind people that please don't complain if I were to put a nativity scene out during Christmas and say, you know, if it's my house, I get to do with it what I wish despite what other people around the country may feel about it.

Does Huckabee really not know that the East Room of Obama's White House has a nativity scene in it at Christmastide?

My year with the First Ladies: "Who decorates the White House for the holidays?...

...Eighty three volunteers from around the country, but they are not just any volunteers.  Each person must go through a selection process before setting foot in the Executive Mansion.... Below is the Nativity Scene display which dates back to the 1800's: 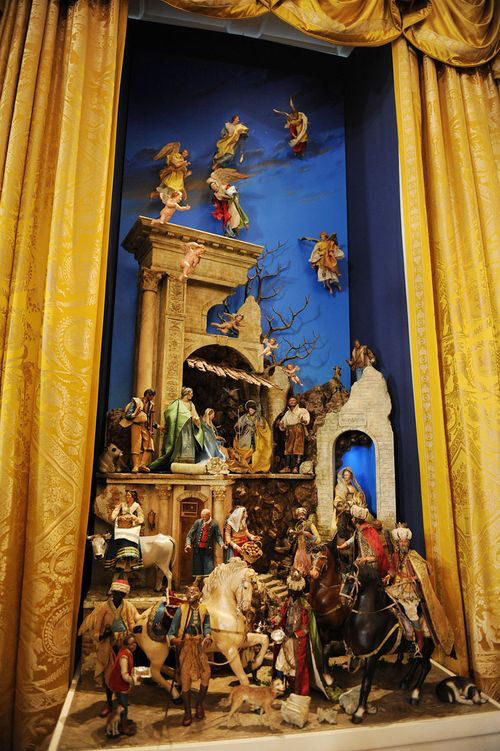 Across the Wide Missouri: What would "civil disobedience" against the Supreme Court's ruling in Obergefell even mean? What does Mike Huckabee want his people to do? Run up to people's weddings and interrupt them? Grab people's marriage licenses and rip them up?

STEPHANOPOULOS: So what exactly are you calling on people to do right now? You say resist and reject this judicial tyranny. Spell out exactly what that means?