Òscar Jorda, Moritz Schularick, and Alan M. Taylor: Leveraged Bubbles: "The critical assumption was that central banks would be in a position to manage the macroeconomic fall-out...

They could clean-up after the mess. While the aftermath of the dotcom bubble seemed to offer support for this rosy view of central bank capabilities, the 2008 global financial crisis dealt a severe blow to the assumption that the fall-out of asset price bubbles was always and everywhere a manageable phenomenon. This observation meshes well with the key finding of this paper: not all bubbles are created equal.... When credit growth fuels asset price bubbles, the dangers for the financial sector and the real economy are much more substantial. The damage done to the economy by the bursting of credit-boom bubbles is significant and long-lasting. These findings can inform ongoing efforts to devise better guides to macro-financial policies at a time when policymakers are searching for new approaches in the aftermath of the Great Recession.

Between 2002 and 2006 the share of the US economy devoted to residential construction rose 1.2%-points of potential GDP above its previous trend value.

It then plunged. By the end of 2007, the residential construction share was back to its trend value. At the share's nadir in 2009 it was 2.5%-points below its trend value. It is still 1.7%-points below where reason of forecasts made early in the 2000s would have expected it to be today. Relative to pre-2002 trend values and shares, the 3%-point-years of GDP bubble-fueled housing boom of 2002-2006 has been offset by what is now a 16%-point-years of GDP shortfall of residential housing construction relative to potential. 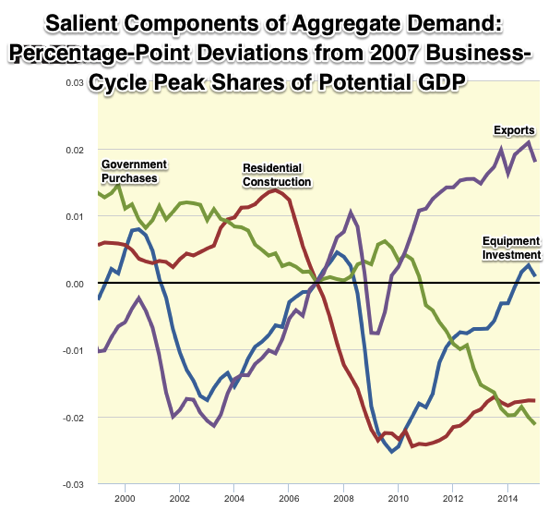 A triangle with a 5-year base--2002 to 2007--and a 1.2%-point height has an area of 3.0%-point-years of potential GDP. That is $500 billion in excess investment during the housing boom-bubble of the 2000s. Contrast that with the $4 trillion of excess investment in information technology and telecommunications during the dot-com boom-bubble of 1996-2000. Compare that to the yardstick provided by the $80 trillion in global financial assets that existed in 2007, or the $50 trillion in PPP-adjusted GDP in 2007. Note that the $30 trillion annual GDP North Atlantic today has a real GDP level 6% below what 1990s and pre-2007 2000s trends would have led us to expect, and is not closing this 6%-point gap but rather slowly widening it. Discount that apparently-permanent output gap at the 5% per year anticipated-equity return less the 2% per year expected growth rate of the North Atlantic. Conclude that $1.8 trillion x 33 = $60 trillion as the present value of the real delta in the long-run North Atlantic growth trajectory. Conclude that such a financial-crisis multiplier of 120--$500 billion of ill-judged overinvestment produces a $60 trillion production and productivity loss--follows absolutely no method of any kind of systemic rationality at all.

It is true that the total of bad loans made was more than $500 billion. By the same token, however, the threat of bankruptcy, bankruptcy, and default do not zero out the value of the debt. Moreover, many loans that went bad were not bad at all under conditions of anything other than the worst macroeconomic crisis in more than eighty years.

But the question is: how? How can $500 billion of irrational exuberance-fueled overinvestment possibly take down an economy with $80 trillion in financial assets, and remove $1.8 trillion of productive economic value-creation each year with, apparently, no end to this delta in value creation in sight? Consider that the U.S. Federal Reserve had no problem building firewalls between the real economy of production and employment and the financial sector, so that the episodes of the financial distress of 1987, 1991, 1997, 1998, and 2001 had little impact on the broader real economy?

1987, 1991, 1997, 1998, and 2001 convinced many--not least among them Alan Greenspan--that the Federal Reserve did indeed have the tools. It seemed able to effectively nail nominal aggregate demand to whatever target it wished. This seemed to be the case regardless of the "froth" going on in finance.

There were and are very strong reasons to believe that this is in fact the case. The Fisherman quantity-theory money-demand equation M/P = YV(i) is not stable. But it is there. And it is well-behaved for i>0. And at i=0 nominal aggregate demand ought to depend powerfully on expected inflation. And if there is one thing central bankers do know how to do, it is how to create inflation. "We could always", said Ben Bernanke famously, "drop money from helicopters..."

What was different this time--and the other times when, as Jorda et al. document, financial distress has had destructive and long-lasting effects on production and employment?

The disproportion between the small apparent cause--a few hundreds of billions of dollars of misdirected investment and resulting bad loans--and the large disastrous apparent effect has led, and will lead, many economists and observers in the past, present, and future to deny that our current catastrophe is in fact what it appears to be. If production and employment are below trend now, they say, it must be because they were above trend--above their sustainable values--back during the boom and the bubble. The business cycle, in this view, is a simple heaping of economic activity into some periods and a removal of economic activity from others. It is not, they say, a shortfall that reduces cumulative totals over time far below what their sustainable cumulative amount might have been.

The alternative, they say, would be to suppose that a market economy characterized by significant levels of nominal debt is in fact a very delicate institution, requiring a great deal of successful management of monetary, banking, and more general debt-related affairs if it is to perform successfully. And that would be unthinkable. Therefore the post-crisis depression must be a necessary and inevitable nemesis of any previous boom. Keynes back in 1931 had very cutting things to say about this point of view:

It seems an extraordinary imbecility that this wonderful outburst of productive energy [over 1924-1929] should be the prelude to impoverishment and depression. Some austere and puritanical souls regard it both as an inevitable and a desirable nemesis on so much overexpansion, as they call it; a nemesis on man's speculative spirit. It would, they feel, be a victory for the mammon of unrighteousness if so much prosperity was not subsequently balanced by universal bankruptcy. We need, they say, what they politely call a 'prolonged liquidation' to put us right... http://delong.typepad.com/sdj/2007/09/the-mammon-of-u.html

So what is the fix? Keynes's proposed fix back in 1936 was this:

[When] the illusions of the boom cause particular types of capital-assets to be produced in such excessive abundance that some part of the output is, on any criterion, a waste of resources.... Investments which will in fact yield, say, 2% in conditions of full employment are made in the expectation of a yield of, say, 6%, and are valued accordingly. When the disillusion comes, this expectation is replaced by a contrary “error of pessimism”... and the resulting collapse of new investment then leads to a state of unemployment in which the investments, which would have yielded 2% in conditions of full employment, in fact yield less than nothing. We reach a condition where there is a shortage of houses, but where nevertheless no one can afford to live in the houses that there are.

Thus the remedy for the boom is not a higher rate of interest but a lower rate of interest! For that may enable the so-called boom to last. The right remedy for the trade cycle is not to be found in abolishing booms and thus keeping us permanently in a semi-slump; but in abolishing slumps and thus keeping us permanently in a quasi-boom... http://tinyletter.com/mattyglesias/letters/surplus-content

We see here a Keynes working in a Keynesian model very different from that of Modigliani (1944). In Modigliani (1944) the underlying problem is a labor market failure--the inability of the labor market to absorb nominal wage deflation--that calls for demand management in the form of appropriately stimulative fiscal and monetary policy. Here for Keynes the underlying problem is a credit channel failure. The behavioral-financial reaction to the bursting of the bubble and the resulting wave of bankruptcies produces na overshooting on the downside--a fall in the Wicksellian natural rate of interest to less than zero even though there are still many ways people could be put to work on positive NPV projects.

We here today recognize the possibility of such a credit-channel clogging as the generator of the down phase of the business cycle, and in response tend to move among three positions: (1) expansionary fiscal policy, with the government taking up the slack when private finance is unable to mobilize the risk-bearing capacity to properly support entrepreneurship and enterprise; (2) a higher inflation target, so that even in the most depressed circumstances the central bank can still push the market interest rate down to the Wicksellian natural rate; and (3)--which I think Jorda and company favor--extremely tight restrictions on leverage and debt finance, especially in housing, to keep credit from booming excessively to create systemic vulnerability in the first place.

But I find it interesting that back in 1936 Keynes went to a fourth position: what we used to call the "Greenspan put", and perhaps should have called the "Keynes put"--to use monetary policy to validate whatever levels nominal asset prices, at least, reach during the bubble.

There is a strong sense in which we have, collectively, fallen down on our job. We agree we want a stable and predictable financial system and monetary policy. But what is "stable"? Do we care about levels or rates of change of our target? Do we accept base drift in our target or do we reverse it? Do we ever want to credibly promise to be irresponsible? And what is our target--the value of gold, the value of commodities, the values of those prices that tend to be sticky, nominal spending as a whole, asset values, just the values of those assets that are widely used as collateral, or something else? The bestiary of possible definitions of monetary and financial "stability" and the likely emergent macroeconomic patterns that they generate has not progressed very far. We are still very close to Robert Peel's principles of the 1870s: (1) It should be illegal for the central bank to max out the printing press or max out its balance sheet. (2) But in a crisis, who cares about the technical legalities? Plus William Bagehot's rule of the 1870s: (1) Lend freely. (2) Lend on collateral that is good in normal times. (3) Lend at a penalty rate.

And do note: In a world in which fiscal austerity appears to exert a strange non-technocratic hypnotic hold over the minds of politicians, in which the 2%/year or less inflation target appears set in stone, and in which an over-mighty financial sector without any ability to recognize and act in its own long-run interest, any ability to self-organize as a class for itself, our policy options are rather limited.

Òscar Jorda, Moritz Schularick, and Alan M. Taylor: Leveraged Bubbles: "The critical assumption was that central banks would be in a position to manage the macroeconomic fall-out...

They could clean-up after the mess. While the aftermath of the dotcom bubble seemed to offer support for this rosy view of central bank capabilities, the 2008 global financial crisis dealt a severe blow to the assumption that the fall-out of asset price bubbles was always and everywhere a manageable phenomenon. This observation meshes well with the key finding of this paper: not all bubbles are created equal.... When credit growth fuels asset price bubbles, the dangers for the financial sector and the real economy are much more substantial. The damage done to the economy by the bursting of credit-boom bubbles is significant and long-lasting. These findings can inform ongoing efforts to devise better guides to macro-financial policies at a time when policymakers are searching for new approaches in the aftermath of the Great Recession.