Monday Austrian-Economists Smackdown: The "Hangover Theory" of the 2008-2009 Crash Fails Because of Timing

Over at Equitable Growth: By coincidence, two people this past weekend have soberly informed me of what they call a "hard truth": that nationwide employment simply had to go down in 2008 and 2009.

You see, they said, we had to move people out of me industry of building houses and the occupations connected to that industry, and it was impossible to do that without lowering employment. READ MOAR

This is, of course, an echo of John Cochrane's claim in his keynote address to the 2008 CRSP Forum that:

"We should have a recession,” Cochrane said in November, speaking to students and investors in a conference room that looks out on Lake Michigan. “People who spend their lives pounding nails in Nevada need something else to do...

Or, as he explained it to The New Yorker's John Cassidy:

The baseline of an economy working well will include... some fluctuations in unemployment. When we discover we made too many houses in Nevada some people are going to have to move to different jobs, and it is going to take them a while of looking to find the right job for them. There will be some unemployment. Not as much as we have, surely, but some.... Some component of unemployment is people searching for better fits after shifts that have to happen.... That is a big and enduring contribution... [that] does come out of a perfectly functioning economy.... Is ten per cent the right number? Now we are talking opinions.... But what we need is models, data, predictions... not my opinion versus your opinion...

The point, though, is that this is simply wrong. Look at the collapse of employment in the country as a whole. It starts in the winter of 2008 and goes until the fall of 2009: 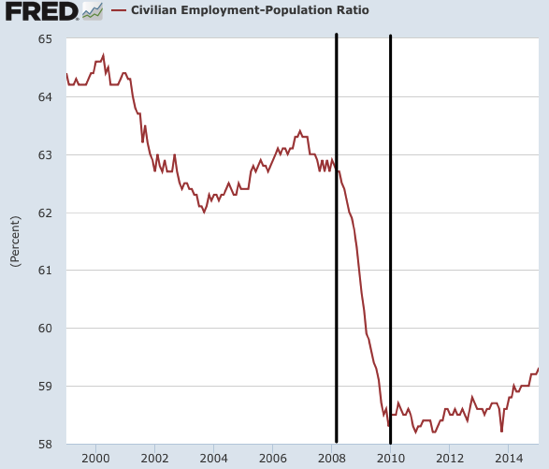 Look at the collapse of economic activity in the residential construction sector--the period of time when we are moving resources out of businesses employing people "pounding nails in Nevada": 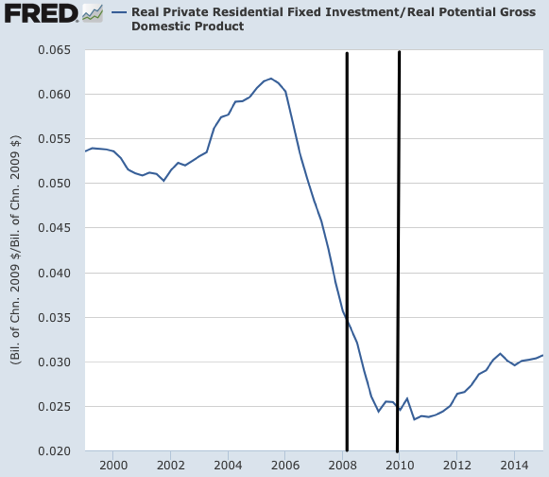 Thus the "hangover theory" of the 2008-2009 crash in employment fails because it simply cannot make the timing work.

The sectoral reallocation is a very different thing from the macroeconomic depression. And the fact that people since before Schumpeter have erroneously tried to conflate them does not mean that we should.

And so I need to, once again, quote Paul Krugman--explicitly commenting on the "pounding nails" quote from the 2008 CRSP Keynote--because he is right:

Paul Krugman (2008): Hangover Theorists: "So the hangover theory, which I wrote about a decade agO...

...is still out there. The basic idea is that a recession, even a depression, is somehow a necessary thing, part of the process of ‘adapting the structure of production.’ We have to get those people who were pounding nails in Nevada into other places and occupation, which is why unemployment has to be high in the housing bubble states for a while. The trouble with this theory, as I pointed out way back when, is twofold:

One striking fact, which I’ve already written about, is that the current slump is affecting some non-housing-bubble states as or more severely as the epicenters of the bubble....

According to Brad DeLong,

But now, apparently, it is.

Paul Krugman (1998): The Hangover Theory: "A few weeks ago, a journalist devoted a substantial part of a profile of yours truly...

...to my failure to pay due attention to the 'Austrian theory' of the business cycle—a theory that I regard as being about as worthy of serious study as the phlogiston theory of fire. Oh well. But the incident set me thinking—not so much about that particular theory as about the general worldview behind it. Call it the overinvestment theory of recessions, or 'liquidationism,' or just call it the 'hangover theory.' It is the idea that slumps are the price we pay for booms, that the suffering the economy experiences during a recession is a necessary punishment for the excesses of the previous expansion.

The hangover theory is perversely seductive—not because it offers an easy way out, but because it doesn't. It turns the wiggles on our charts into a morality play, a tale of hubris and downfall. And it offers adherents the special pleasure of dispensing painful advice with a clear conscience, secure in the belief that they are not heartless but merely practicing tough love.

Powerful as these seductions may be, they must be resisted—for the hangover theory is disastrously wrongheaded. Recessions are not necessary consequences of booms. They can and should be fought, not with austerity but with liberality—with policies that encourage people to spend more, not less. Nor is this merely an academic argument: The hangover theory can do real harm. Liquidationist views played an important role in the spread of the Great Depression—with Austrian theorists such as Friedrich von Hayek and Joseph Schumpeter strenuously arguing, in the very depths of that depression, against any attempt to restore 'sham' prosperity by expanding credit and the money supply. And these same views are doing their bit to inhibit recovery in the world's depressed economies at this very moment....

Let's ask a seemingly silly question: Why should the ups and downs of investment demand lead to ups and downs in the economy as a whole? Don't say that it's obvious—although investment cycles clearly are associated with economywide recessions and recoveries in practice, a theory is supposed to explain observed correlations, not just assume them. And in fact the key to the Keynesian revolution in economic thought—a revolution that made hangover theory in general and Austrian theory in particular as obsolete as epicycles—was John Maynard Keynes' realization that the crucial question was not why investment demand sometimes declines, but why such declines cause the whole economy to slump.

Here's the problem: As a matter of simple arithmetic, total spending in the economy is necessarily equal to total income (every sale is also a purchase, and vice versa). So if people decide to spend less on investment goods, doesn't that mean that they must be deciding to spend more on consumption goods—implying that an investment slump should always be accompanied by a corresponding consumption boom? And if so why should there be a rise in unemployment?

Most modern hangover theorists probably don't even realize this is a problem for their story. Nor did those supposedly deep Austrian theorists answer the riddle. The best that von Hayek or Schumpeter could come up with was the vague suggestion that unemployment was a frictional problem created as the economy transferred workers from a bloated investment goods sector back to the production of consumer goods. (Hence their opposition to any attempt to increase demand: This would leave 'part of the work of depression undone,' since mass unemployment was part of the process of 'adapting the structure of production.') But in that case, why doesn't the investment boom—which presumably requires a transfer of workers in the opposite direction—also generate mass unemployment? And anyway, this story bears little resemblance to what actually happens in a recession, when every industry—not just the investment sector—normally contracts....

The hangover theory, then, turns out to be intellectually incoherent; nobody has managed to explain why bad investments in the past require the unemployment of good workers in the present. Yet the theory has powerful emotional appeal. Usually that appeal is strongest for conservatives, who can't stand the thought that positive action by governments (let alone—horrors!—printing money) can ever be a good idea. Some libertarians extol the Austrian theory, not because they have really thought that theory through, but because they feel the need for some prestigious alternative to the perceived statist implications of Keynesianism. And some people probably are attracted to Austrianism because they imagine that it devalues the intellectual pretensions of economics professors. But moderates and liberals are not immune to the theory's seductive charms—especially when it gives them a chance to lecture others on their failings....

The Great Depression happened largely because policy-makers imagined that austerity was the way to fight a recession; the not-so-great depression that has enveloped much of Asia has been worsened by the same instinct. Keynes had it right: Often, if not always:

it is ideas, not vested interests, that are dangerous for good or evil.'

Monday Austrian-Economists Smackdown: The "Hangover Theory" of the 2008-2009 Crash Fails Because of Timing

Over at Equitable Growth: By coincidence, two people this past weekend have soberly informed me of what they call a "hard truth": that nationwide employment simply had to go down in 2008 and 2009.

You see, they said, we had to move people out of me industry of building houses and the occupations connected to that industry, and it was impossible to do that without lowering employment. READ MOAR