Three things strike me while rereading Schumpeter's 1934 "Depressions" (and also his 1927 Explanation of the Business Cycle): READ MOAR

There was an alternative road of understanding open to Schumpeter, Hayek, and company--one that the line of argument from Mill through Wicksell and Fisher to Keynes and Friedman took. It goes roughly like this:

This is a clear, coherent story about downturns. It says that downturns can be triggered by a recognition of overinvestment. But it also says that downturns can be triggered by other things. And there is no reason why the recognition of overinvestment has to be followed by a period of high involuntary unemployment. Structural adjustment and sectoral rebalancing may be desirable, but periods of structural adjustment and sectoral rebalancing do not always require high structural unemployment. And curing high demand slack-driven involuntary unemployment does not require slowing structural adjustment: you do not have to refill a tire through the puncture.

Yet neither Schumpeter nor Hayek nor any of their latter-day epigones could ever go to that Mill-Bagehot-Wicksell-Fisher-Keynes-Friedman argument. Instead, we have an alternative axis--a Ricardo-Marx-Schumpeter-Hayek-Hoover axis--that denies that anything other than budget surpluses and "sound money" can ever be appropriate economic policies. Why not? The root of the rejection of Mill-Friedman really does seem to me a belief that the market and its "general gluts" cannot be improved by macroeconomic management, either because (Ricardo-Schumpeter-Hayek-Hoover) the market is and must be good, or because (Marx) the market is and must be bad.

Joseph Schumpeter (1934): [Depressions: What Can We Learn from Past Experience?](https://books.google.com/books?id=WVMUGqMU5bAC&pg=PA115&dq=schumpeter+depressions+are+not+simply+evils,+which+we+might+attempt+to+suppress&hl=en&sa=X&ei=rQ2QVZTfHsnvoASqpYaAAw&ved=0CCwQuwUwAg#v=onepage&q=schumpeter depressions are not simply evils, which we might attempt to suppress&f=false)

The problems presented by periods of depression may be grouped as follows: First, removal of extra economic injuries to the economic mechanism: Mostly impossible on political grounds. Second, relief: Not only imperative on moral and social grounds, but also an important means to keep up the current of economic life and to steady demand, although no cure for fundamental cases.

Third, remedies: The chief difficulty of which lies in the fact that depressions are not simply evils, which we might attempt to suppress, but--perhaps undesirable--forms of something which has to be done, namely, adjustment to previous economic change.

Most of what would be effective in remedying a depression would be equally effective in preventing this adjustment. This is especially true of inflation, which would, if pushed far enough, undoubtedly turn depression in to the sham prosperity so familiar from European postwar [i.e., World War I] experience, but which, if it be carried to that point, would, in the end, lead to a collapse worse than the one it was called in to remedy.

Fourth, reforms of institutions intended to remedy the situation but suggested by the moral and economic evils of both booms and depressions: The crucial point of these reforms lies in the coincidence of a political atmosphere exceptionally favorable, and an economic situation exceptionally unfavorable to their success. No doubt they will always be carried amidst enthusiastic clapping of hands. But they will also be stigmatized in the future by their tendency to prevent or retard recovery. This should not blind to us to any merits they may have, but it is a plain and undeniable fact.

The Atmosphere of Periods of Depression: We have seen that the course of events in all periods of depression presents a significant family likeness. So do the attitudes of the people. Defeat on the battlefield destroys the prestige of military rulers and their confidence in themselves; crises destroy whatever of both these things business leaders may enjoy. Their cry for help is the more damaging for them the more they disapproved of government interference before. For the time being, the majority of people grows out of humor with the economic system under which they live, and becomes inclined to favor what in some cases we call reaction and in others radicalism. In fact, it makes astonishingly little difference which way they more politically. The consequences are much the same in both cases....

The Upshot: There is on reason to despair--this is the first lesson to be derived from our story. Fundamentally the same thing has happened in the past, and it has--in the only two cases which are comparable to the present one--lasted just as long. We are more keenly alive now to human suffering, and we are dealing with the situation under political pressure by political methods, but substantially we are confronted only with problems which the world was confronted with before.

In all cases, not only the two which we have analyzed, recovery came of itself. There is certainly this much of truth in the talk about the recuperative powers of our industrial system. But this is not all: our analysis leads us to believe that recovery is sound only if it does com of itself. For any revival which is merely due to artificial stimulus leaves part of the work of depressions undone and adds, to an undigested remnant of maladjustment, new maladjustment of its own which has to be liquidated in turn, thus threatending business with another crisis ahead. Particularly, our story provides a presumption against remedial measures which work through money and credit. For the trouble is fundamentally not with money and credit, and policie of this class are particularly apt to keep up, and add to, maladjustment, and to produce additional trouble in the future... 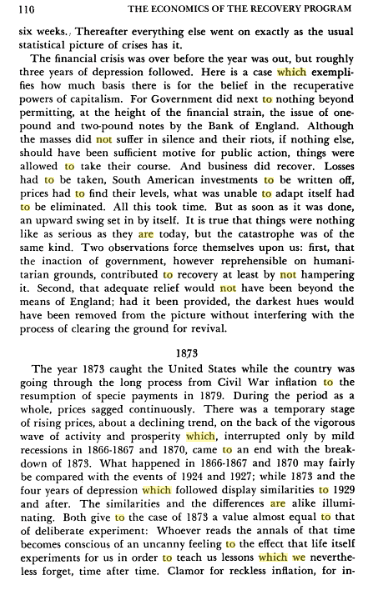 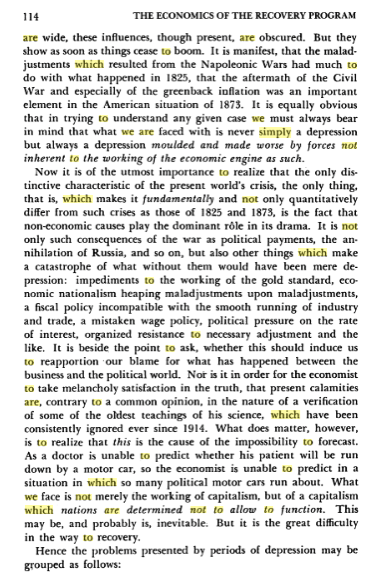 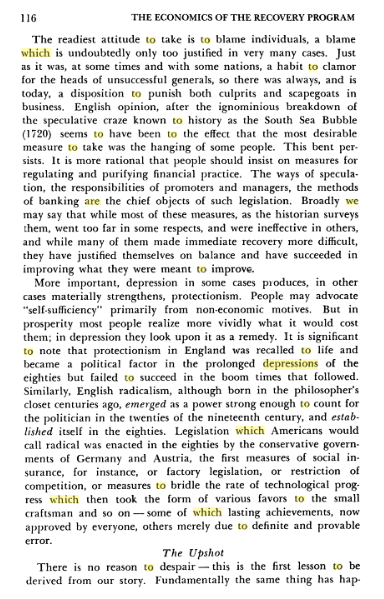 Three things strike me while rereading Schumpeter's 1934 "Depressions" (and also his 1927 Explanation of the Business Cycle): READ MOAR