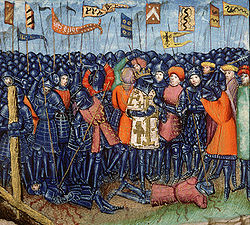 The crusaders began their march from Sephoria on July 3.... By noon on that day, the Crusader army had reached a spring at the village of Tur'an some six miles (10 km) from La Saphorie. Here, according to Saladin, 'The hawks of the Frankish infantry and the eagle of their cavalry hovered around the water.' It was still nine miles (14 km) to Tiberias. Therefore, with only a half day of marching time remaining, any attempt to leave this sure water source to seek that objective the same day, all while under the constant attack of Saladin's army, would be foolhardy. (In 1182 the Frankish army had only advanced 8 miles (13 km) in a full day in face of the enemy and in 1183 Guy had managed but six miles (10 km) in a similar situation, taking a full day.) But, as Saladin wrote:

Satan incited Guy to do what ran counter to his purpose...

Saladin sent the two wings of his army around the Frankish force and seized the spring at Tur'an, thus blocking the Frankish line of retreat.... There was [then] a major change in the Crusaders plan. Believing that the Crusader army could not fight its way across Saladin's front, Raymond persuaded Guy to veer to the left and head for the springs of Hattin only 6 miles (9.7 km) away.... In the ensuing struggle, the Crusader rearguard was forced to a standstill by continuous attacks, thus halting the whole army on the arid plateau near the village of Meskana. The crusaders were thus forced to make camp surrounded by the Muslims. They now had no water nor any hope of receiving supplies or reinforcements. Guy hoped that the Christian army could force its way through to the Spring of Hattin the following morning.

The Muslim army piled on the crusaders' misery, by praying, singing, beating drums, showing symbols, and chanting. They set fire to the dry grass, making the crusaders' throats even drier. The Crusaders were now thirsty, demoralized and exhausted. The Muslim army by contrast had a caravan of camels bring goatskins of water up from Lake Tiberias (now known as the Sea of Galilee). Baha ad-Din ibn Shaddad summarizes the situation of the Frankish army:

They were closely beset as in a noose, while still marching on as though being driven to death that they could see before them, convinced of their doom and destruction and themselves aware that the following day they would be visiting their graves.

On the morning of July 4, the crusaders were blinded by smoke from the fires set by Saladin's forces. They came under fire from Muslim mounted archers from the divisions commanded by Gökböri, who had been resupplied with 400 loads of arrows that had been brought up during the night. Gerard and Raynald advised Guy to form battle lines and attack, which was done by Guy's brother Amalric. Raymond led the first division with Raymond of Antioch, the son of Bohemund III of Antioch, while Balian and Joscelin III of Edessa formed the rearguard. Thirsty and demoralized, the crusaders broke camp and changed direction for the springs of Hattin, but their ragged approach was attacked by Saladin's army which blocked the route forward and any possible retreat. Count Raymond launched two charges in an attempt to break through to the water supply at the Lake Tiberias. The second of these enabled him to reach the lake and make his way to Tyre.

After Raymond escaped, Guy's position was now even more desperate. Most of the Christian infantry had effectively deserted by fleeing in a mass onto the Horns of Hattin where they played no further part in the battle. Overwhelmed by thirst and wounds, many were killed on the spot without resistance while the remainder were taken prisoner. Their plight was such that five of Raymond's knights went over to the Muslim leaders to beg that they be mercifully put to death. Guy attempted to pitch the tents again to block the Muslim cavalry. The Christian knights and mounted serjeants were disorganized, but still fought on. Christian chronicles record how the gold reliquary holding the True Cross was hustled into Guy's red tent for safety. Now the crusaders were surrounded and, despite three desperate charges on Saladin's position, were eventually defeated. An eyewitness account of this is given by Saladin's 17-year-old son, al-Afdal. It is quoted by Muslim chronicler Ibn al-Athir:

When the king of the Franks [Guy] was on the hill with that band, they made a formidable charge against the Muslims facing them, so that they drove them back to my father [Saladin]. I looked towards him and he was overcome by grief and his complexion pale. He took hold of his beard and advanced, crying out 'Give the lie to the Devil!' The Muslims rallied, returned to the fight and climbed the hill. When I saw that the Franks withdrew, pursued by the Muslims, I shouted for joy, 'We have beaten them!' But the Franks rallied and charged again like the first time and drove the Muslims back to my father. He acted as he had done on the first occasion and the Muslims turned upon the Franks and drove them back to the hill. I again shouted, 'We have beaten them!' but my father rounded on me and said, 'Be quiet! We have not beaten them until that tent [Guy's] falls.' As he was speaking to me, the tent fell. The sultan dismounted, prostrated himself in thanks to God Almighty and wept for joy.

Modern interpretation of Saladin accepting the surrender of Guy of Lusignan The Muslim forces had captured the royal tent of King Guy, as well as the True Cross after the Bishop of Acre was killed in the fighting. Prisoners included Guy, his brother Amalric II, Raynald de Chatillon, William V of Montferrat, Gerard de Ridefort, Humphrey IV of Toron, Hugh of Jabala, Plivain of Botron, Hugh of Gibelet, and many other barons of the Kingdom of Jersalem. Perhaps only as few as 3,000 Christians escaped the defeat. The anonymous text De Expugnatione Terrae Sanctae per Saladinum Libellus claims that Raymond, Joscelin, Balian, and Reginald of Sidon fled the field in the middle of the battle, trampling 'the Christians, the Turks, and the Cross' in the process, but this is not corroborated by other accounts and reflects the author's hostility to the Poleins.

The exhausted captives were brought to Saladin's tent, where Guy was given a goblet of iced water as a sign of Saladin's generosity. When Guy passed the goblet to his fellow captive Raynald, Saladin allowed the old man (Raynald was about 60) to drink but shortly afterwards said that he had not offered water to Raynald and thus was not bound by the Muslim rules of hospitality. When Saladin accused Raynald of being an oath breaker, Raynald replied 'kings have always acted thus. I did nothing more.' Saladin then executed Raynald himself, beheading him with his sword. Guy fell to his knees at the sight of Raynald's corpse but Saladin bade him to rise, saying, 'It is not the wont of kings, to kill kings; but that man had transgressed all bounds, and therefore did I treat him thus. This man was only killed because of his maleficence and perfidy.'

Saladin commanded that the other captive barons were to be spared and treated humanely. However all of the 200 knights of the Templar and Hospitaller Military Orders taken prisoner were executed at Saladin's orders, with the exception of the Grand Master of the Temple. The executions were by decapitation. Saint Nicasius, a Knight Hospitaller venerated as a Christian martyr, is said to have been one of the victims. Imad ed-Din, Saladin's secretary, wrote:

Saladin ordered that they should be beheaded, choosing to have them dead rather than in prison. With him was a whole band of scholars and sufis and a certain number of devout men and ascetics, each begged to be allowed to kill one of them, and drew his sword and rolled back his sleeve. Saladin, his face joyful, was sitting on his dais, the unbelievers showed black despair.

The True Cross was fixed upside down on a lance and sent to Damascus. Some of Saladin's men now left the army, taking lower ranking Frankish prisoners with them as slaves...

The crusaders began their march from Sephoria on July 3.... By noon on that day, the Crusader army had reached a spring at the village of Tur'an some six miles (10 km) from La Saphorie. Here, according to Saladin, 'The hawks of the Frankish infantry and the eagle of their cavalry hovered around the water.' It was still nine miles (14 km) to Tiberias. Therefore, with only a half day of marching time remaining, any attempt to leave this sure water source to seek that objective the same day, all while under the constant attack of Saladin's army, would be foolhardy. (In 1182 the Frankish army had only advanced 8 miles (13 km) in a full day in face of the enemy and in 1183 Guy had managed but six miles (10 km) in a similar situation, taking a full day.) But, as Saladin wrote:

Satan incited Guy to do what ran counter to his purpose...