When Greece, Her Knee in Suppliance Bent... 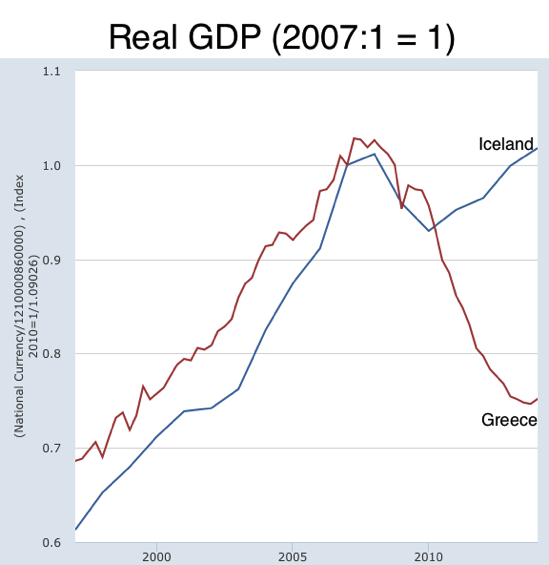 How large this really was is debatable. But the northern Europeans appear to value it a lot. Therefore they should be willing to pay to make Greece's life happier inside the euro zone then it would be via exit and devaluation.

So far that has simply not happened. There is no dispute that Greece would today be vastly better off if it had done an Iceland back in 2010.

Now comes the IMF research staff to say--not surprisingly to anyone who has been following the news on multipliers--that the Eurozone's program for Greece will block Greek recovery for, effectively, as long as it is not replaced by something that recognizes the shape of economic reality:

Josh Barro: The I.M.F. Is Telling Europe the Euro Doesn’t Work: "The I.M.F. memo amounts to an admission that the eurozone cannot work in its current form...

...It lays out three options for achieving Greek debt sustainability, all of which are tantamount to a fiscal union, an arrangement through which wealthier countries would make payments to support the Greek economy. Not coincidentally, this is the solution many economists have been telling European officials is the only way to save the euro--and which northern European countries have been resisting because it is so costly.... Of course, the main alternative to a deal is a Greek exit from the euro, which would also be costly to European holders of existing Greek debt, who could expect to be repaid in devalued drachmas, if at all. That is a reason for European governments to be willing to pay the price prescribed by the I.M.F. to make a Greek deal work. But the I.M.F. officials are saying they cannot pretend that a bailout deal will lead to an eventual payment in full from Greece. If Greece stays in the euro, it will need much more financial support from the rest of Europe than was admitted in Monday’s deal, and the I.M.F. is asking European governments to put that admission on paper.

...suggests that it takes about 4 point-years of output gap to reduce prices relative to baseline by 1 percentage point. So suppose that you are 25 percent overvalued, and get no help from higher inflation in the core. Then ‘internal devaluation’ requires sacrificing around 100 percent of a year’s GDP.... Countries as overvalued as much of the European periphery became thanks to the lending boom are supposed to sacrifice a full year’s economic output as part of a process of beating prices and wages down. Now more than ever, the euro looks like a terrible idea.

When Greece, Her Knee in Suppliance Bent...