Over at Equitable Growth: Jared Bernstein: Optimal Fiscal Policy: "I testified in the House Budget Committee this AM...

...[with Ryan Silvey from Missouri, John B. Taylor from Stanford, and Chris Edwards from Cato], and have many excellent war stories to share. But no time to do so now.

Well! Jared, where are the war stories? We demand them. READ MOAR

Roughly speaking, the position of the majority R’s is that you should always balance the budget for… I just sat with these folks for two long hours and I can’t really finish that sentence.

Partly for moral reasons. One witness blamed ‘Keynesianism for the decline in beneficial "Victorian fiscal morality".’ Another had a macro-model that maintained, contrary to the CBO’s analysis of the R[epublican]’s budget resolution, that the deep near term cuts would boost, not hurt, growth, because forward-looking households would realize that R[epublican] spending cuts would eventually lead to greater investment, more tax cuts, and higher incomes in the future, so they’d spend more today to offset the cuts. One member, touting the folk’ism that since families have to balance their budgets, the Feds should too, took issue with my point that in fact, families borrow long-term all the time for things like college and homes. He asked me if I make more than I spend. I told him I certainly went into debt to pay for college, and he said he did too!

Another R[epublican] member went on about how much he hated government debt and I had the chance to ask him, ‘so, why did you guys pass $570 billion in non-offset tax cuts?!’ I think he answered, not unreasonably, something like, ‘well, maybe that’s something we can put on the table.’ 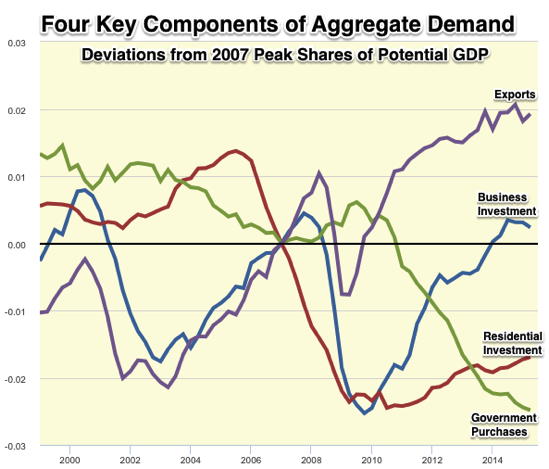 Failing the sudden appearance of said phantom, restructuring the procedures of monetary policy in order to summon the inflation-expectations imp may be, like Obi-Wan Kenobi, our only hope.[1]

Sooner or later we are going to have an economy stuck in a depressed state in or near the liquidity trap and then another big negative shock will hit from somewhere. Maybe that shock is coming from China right now. And should that happen, we will look back to the happy days of 2009.

Back in the late 1990s the Federal Reserve Bank of Boston ran a conference about what to do should we find ourselves at the zero lower bound.

I found myself thinking over and over again of something my great uncle Phil from Marblehead Massachusetts used to say. He once took a sailing safety examination. One question was: “What should you do if you are caught on a lee shore in a hurricane?” His answer was: “You never get caught on a lee shore in a hurricane!” He was correct. If you want to minimize financial, monetary, and economic instability, you work very very hard indeed to make sure that you are never in a position where short-term safe nominal interest rates are constrained by the zero lower bound.

And the consequences of such constraint are such that back in 1992 although Larry Summers and I were very enthusiastic about reducing inflation from 10%/year to 5%/year, we were very wary of reducing it from 5%/year to 0:

we suspect it would be a mistake to extrapolate the results on the benefits…. On almost any theory of why inflation is costly, reducing inflation from 10 percent to 5 percent is likely to be much more beneficial than reducing it from 5 percent to zero…. And there are potentially important benefits of a policy of low positive inflation…. A large easing of monetary policy, as measured by interest rates, moderated but did not fully counteract the forces generating the recession that began in 1990. The relaxation of monetary policy seen over the past three years in the United States would have been arithmetically impossible had inflation and nominal interest rates both been three percentage points lower in 1989. Thus a more vigorous policy of reducing inflation to zero in the mid-1980s might have led to a recent recession much more severe than we have in fact seen…

What are the drawbacks of a 4%/year inflation target, really? Commercial banks are very happy--in such an environment they can invest their customers' deposits in liquid Treasury securities and well-collateralized loans and be confident of a profit if they focus their attention on efficient customer service. Few people will face a situation in which their bosses will go bankrupt unless they either diss them by cutting their nominal wages or fire them. 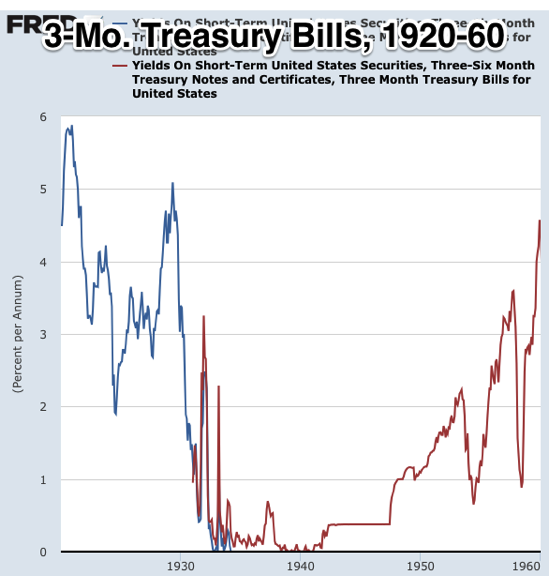 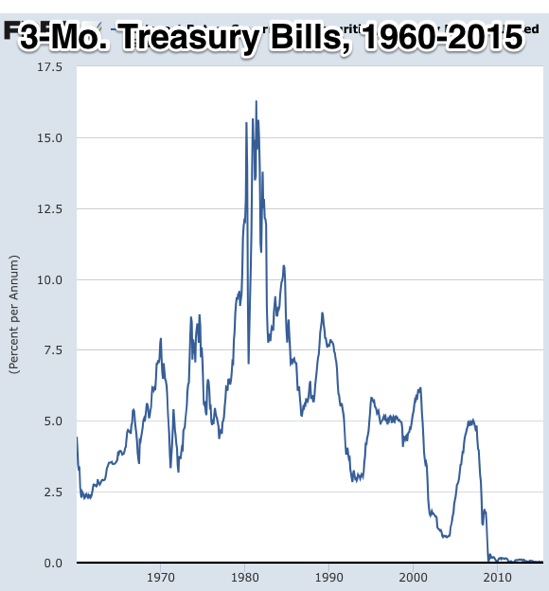 In the past century, the United States has had three-month Treasury Bill rates below 1/2%/year for fully one-quarter of the time. Used to be able to say that the Great Depression and World War II were special. Today it is much much harder to say that...

[1] Now can somebody remind me why Lars Svennson is confident that a crawling-peg exchange-rate target would summon the inflation-expectations imp, and Paul Krugman is not?

Over at Equitable Growth: Jared Bernstein: Optimal Fiscal Policy: "I testified in the House Budget Committee this AM...

...[with Ryan Silvey from Missouri, John B. Taylor from Stanford, and Chris Edwards from Cato], and have many excellent war stories to share. But no time to do so now.

Well! Jared, where are the war stories? We demand them. READ MOAR