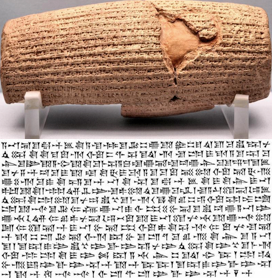 He put his first-born, an un-noble man, in charge of the country and constructed false temples in Ur and other cities. He instituted improper rites and brought the daily religious offerings to a halt within the sanctuaries. He no longer feared Marduk, supreme God. He caused evil acts within the city every day, burdened the people without relief thereby bringing ruin.

The supreme God became furious at these transgressions. Taking pity on all the settlements whose sanctuaries were in ruins, and for the populations who had become like corpses, He sought to find relief. He searched all the countries for a savior seeking an upright king. He took the hand of Kurush, king of Anshan, and proclaimed his kingship over all the world. He made the land of the Qutu and all the Median troops prostrate themselves at Kurush' feet. He looked for justice and righteousness for the black-headed people whom he had put under his care.

Marduk, the great lord, who nurtures his people, saw with pleasure Kurush's fine deeds and true heart and ordered that Kurush go to Babylon. He had Kurush take the road to Tintir, and, like a friend and companion, walked at his side. Kurush's vast troops whose number, like the water in a river, could not be counted, marched fully-armed at his side. Marduk had Kurush enter Shuanna without fighting or battle. He saved Babylon from hardship. He handed over to Kurush Nabonidus, the king who did not fear him. All the people of Tintir, Sumer and Akkad, nobles and governors, bowed down before Kurush and kissed his feet, rejoicing over his kingship and their faces shone. The lord through whose trust all were rescued from death and who saved them all from distress and hardship, they blessed him sweetly and praised his name.

Amid jubilation and rejoicing, I entered Babylon in peace to establish a just government and strive for peace. My troops wandered peacefully throughout Babylon. In all of Sumer and Akkad, I gave no cause for fear and no one was terrorized. I concerned myself with the needs and welfare of the citizens of Babylon, Sumer and Akkad, and with promoting their well-being. I freed them from their improper oppression & bondage. I healed their afflictions and put an end to their misfortune. I restored their dilapidated dwellings. I gathered and assisted the displaced held in bondage, to return to their homes.

I rebuilt sanctuaries and chapels that lay in ruins. The deities of Sumer and Akkad that Nabonidus had, to the fury of the people, brought to Shuanna, I returned unharmed to their rightful sanctuaries. I have returned all the deities to their sanctuaries and restored their temples.

All the enthroned kings from every quarter, from the Upper Sea to the Lower Sea, from the city of Ashur and Susa, Akkad, the land of Eshnunna, the city of Zamban, the city of Meturnu, Der, as far as the border of the land of Qutu the kings of Amurru who live in tents, and from remote lands, brought tribute into Shuanna and laid them at my feet. My government has enabled all these lands to live in peace and order.

For the protection of the citizens, I have strengthened with baked brick and tar, the protecting walls of Imgur-Enlil and the fortifications of the city of Babylon beside the city's moat. I have completed sections of the fortifications that had remained unfinished despite the bondage in which previous kings had placed the people. I have had constructed from cedar, copper cladding and copper hinges and fittings, the large gates of the city. I strengthened all the gates I saw inscribed the name of my predecessor, King Ashurbanipal.

He put his first-born, an un-noble man, in charge of the country and constructed false temples in Ur and other cities. He instituted improper rites and brought the daily religious offerings to a halt within the sanctuaries. He no longer feared Marduk, supreme God. He caused evil acts within the city every day, burdened the people without relief thereby bringing ruin.