Wekeend Reading: An interview with Josiah Ober, author of The Rise and Fall of Classical Greece 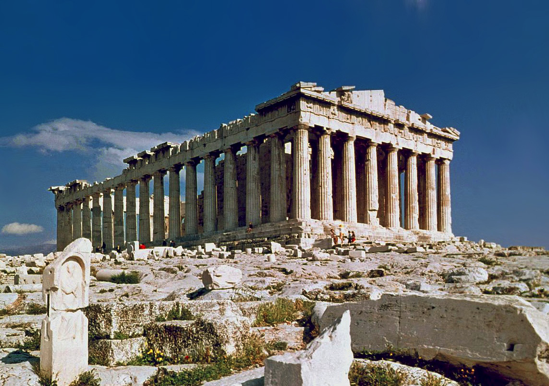 Debra Liese: An interview with Josiah Ober, author of The Rise and Fall of Classical Greece:

The period considered classical Greece (roughly the 4th through 5th century BC) had a profound effect on Western civilization, forming the foundations of politics and philosophy, as well as artistic and scientific thought. Why did Greece experience such economic and cultural growth—and why was it limited to this 200-year period? Josiah Ober, Professor of Political Science and Classics at Stanford University and author of The Rise and Fall of Classical Greece, took the time to explain the reasons behind Greece’s flourishing, and what its economic rise and political fall can tell us about our own world.

What was the rise of classical Greece and when and why did it happen?

At the Early Iron Age nadir, in ca. 1000 BCE, the Greek world was sparsely populated and consumption rates hovered near subsistence. Some 650 years later, in the age of Aristotle, the population of the Greek world had increased at least twenty-fold. During that same period, per capita consumption probably doubled.

That rate of growth is far short of modern rates, but it equals the growth rate of the two standout societies of early modern Europe: Holland and England in the 16th to 18th centuries. Historians had long thought that the Greek world was impoverished and its economy overall static – which of course made Greek culture (art, philosophy, drama, and so on) seem that much more ‘miraculous.’ But, thanks to the recent availability and quantification of a huge mass of data, drawn from both documentary and archaeological sources, we can now trace the amazing growth of the Greek economy, both in its extent (how many people, how much urbanization, and so on), and in terms of per capita consumption (how well people lived).

So the rise of the Greek world was predicated on sustained economic growth, but why did the Greek economy grow so robustly for so long?

JO: In the 12th century BCE, the palace-centered civilization of Bronze Age Greece collapsed, utterly destroying political and social hierarchies. Surviving Greeks lived in tiny communities, where no one was rich or very powerful. As Greece slowly recovered, some communities rejected attempts by local elites to install themselves as rulers. Instead, ordinary men established fair rules (fair, that is, for themselves) and governed themselves collectively, as political equals. Women and slaves were, of course, a very different story. But because these emerging citizen-centered states often out-competed elite-dominated rivals, militarily and economically, citizenship proved to be adaptive. Because participatory citizenship was not scalable, Greek states stayed small as they became increasingly democratic. Under conditions of increasingly fair rules, individuals and states rationally invested in human capital, leading to increased specialization and exchange. The spread of fair rules and a shared culture across an expanding Greek world of independent city-states drove down transaction costs. Meanwhile competition encouraged continuous institutional and technological innovation. The result was 700+ years of of world-class efflorescence, marked by exceptional demographic and per capita growth, and by immensely influential ideas, literature, art, and science. But, unlike the more familiar story of ancient empires, no one was in running the show: Greece remained a decentralized ecology of small states.

So what about the fall?

JO: There are two ‘falls’ – one political and one economic. The economic fall is the decline of the Greek economy from its very high level in the age of Aristotle to a ‘premodern Greek normal’ of low population and near-subsistence consumption levels with the disintegration of the Roman empire. That low normal had pertained before the rise of the city-state ecology. After the fall, it persisted until the 20th century. But we also need to explain an earlier political fall. Why, just when the ancient Greek economy was nearing its peak, were Philip II and Alexander (‘the Great’) of Macedon able to conquer the Greek world? And then there is another puzzle: Why were so many Greek city-states able to maintain independence and flourishing economies in the face of Macedonian hegemony? The city-states were overtaken by the Macedonians in part because human-capital investments created a class of skilled and mobile experts in state finance and military organization. Hired Greek experts provided Philip and Alexander with the technical skills they needed to build a world-class army. But meanwhile, deep investments by city-states in infrastructure and training made fortified cities expensive to besiege. As a result, after the Macedonian conquest, royal taxes on Greek cities were negotiated rather than simply imposed. That ensured enough independence for the Greek cities to sustain economic growth until the Roman conquest.

What does the economic rise and political fall of classical Greece have to tell us about our own world?

JO: The new data allows us to test the robustness of contemporary theories of political and economic development. In the classical Greek world, political development was a primary driver of economic growth; democracy appears to be a cause rather than simply an effect of prosperity. The steep rise and long duration of the city-state ecology offers a challenge to neo-Hobbesian centralization theories of state formation, which hold that advanced economic and political development requires the consolidation of centralized state power. The comparatively low rate of ancient Greek income inequality, along with the high rate of economic growth, suggests that the negative correlation of sustained growth with extreme inequality, observed in some recent societies, is not a unique product of modernity. Finally, the history of the ancient Greek world can be read as a cautionary tale about the unanticipated consequences of growth and human capital investment: It reveals how innovative institutions and technologies, originally developed in the open-access, fair-rules context of democratic states, can be borrowed by ambitious autocrats and redeployed to further their own, non-democratic purposes.

How did you get interested in the topic of rise and fall – was it just a matter of ‘Edward Gibbon envy’?

JO: Gibbon is amazing, as a prose stylist and historian. But the origin of my project actually goes back to a quip by a senior colleague at the very beginning of my career: ‘The puzzle is not why the Greek world fell, it is why it lasted more than 20 minutes.’ Twenty-five years ago (and fifteen years after my colleague’s quip), the historical sociologist W.G. Runciman claimed that classical Greece was ‘doomed to extinction’ because the Greek city-states were, ‘without exception, far too democratic.’ True enough: the classical Greek world eventually went extinct. But then, so did all other ancient societies, democratic or otherwise. The Greek city-state culture lasted for the better part of a millennium; much longer than most ancient empires. I’ve long felt that I owed my colleague a solution to his puzzle. This book is an attempt to pay that debt.

Josiah Ober is the Mitsotakis Professor of Political Science and Classics at Stanford University. His books include Democracy and Knowledge, Political Dissent in Democratic Athens, The Athenian Revolution, and Mass and Elite in Democratic Athens (all Princeton). He lives in Palo Alto, California."

Wekeend Reading: An interview with Josiah Ober, author of The Rise and Fall of Classical Greece

Debra Liese: An interview with Josiah Ober, author of The Rise and Fall of Classical Greece:

The period considered classical Greece (roughly the 4th through 5th century BC) had a profound effect on Western civilization, forming the foundations of politics and philosophy, as well as artistic and scientific thought. Why did Greece experience such economic and cultural growth—and why was it limited to this 200-year period? Josiah Ober, Professor of Political Science and Classics at Stanford University and author of The Rise and Fall of Classical Greece, took the time to explain the reasons behind Greece’s flourishing, and what its economic rise and political fall can tell us about our own world.