Why I Believe Paul Krugman Over Jim Hamilton: Why a Chinese Slowdown Is by itself Little Threat to the U.S. Economy

Over at Equitable Growth: The collapse of housing investment in the U.S. after the bubble pop began in late 2005 was absolutely huge: 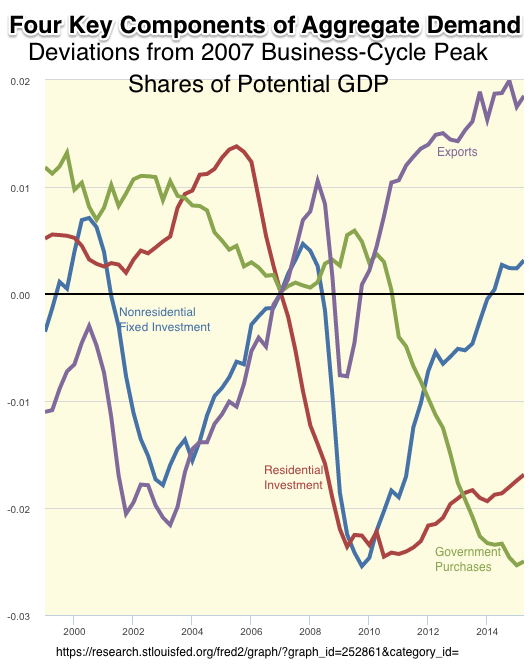 By the end of 2007, about $400 billion/year--2.5% of GDP--of spending on residential construction that had been there in 2005 was no longer. Yet the U.S. economy was not in recession. The predominant worries in the councils of the mighty were that the Federal Reserve would do too much to boost spending and so cause inflation rather than too little and cause recession. And the slack created by the collapse in investment in residences had been quickly and smoothly picked up by rising exports and rising business fixed investment.

The lesson? Make sure the pieces of the government--the fiscal-policy authorities, the president and congress at the federal level and their counterparts in the states, plus the monetary-policy authority that is the Federal Reserve--are doing their job. Make sure they use the levers they control to keep aggregate demand humming along at a stable path. Then sector-specific shocks--even huge sector-specific shocks--are not a big deal for the economy as a whole.

That, at least, is the lesson I draw from 2005-2007. As long as aggregate demand is properly managed, a decentralized market economy is a wonderfully flexible thing. It can and does adjust swiftly to even big sectoral shocks. Shifts in the flow of demand rapidly pull resources out of now-unproductive and into newly-productive uses. As John Maynard Keynes wrote back in 1936:

The State will have to exercise a guiding influence... partly through its scheme of taxation, partly by fixing the rate of interest, and partly, perhaps, in other ways.... [But] if the State is able to determine the aggregate amount of resources devoted to augmenting the instruments and the basic rate of reward to those who own them, it will have accomplished all that is necessary.... Our criticism of the accepted classical theory of economics has [thus] consisted not so much in finding logical flaws in its analysis as in pointing out that its tacit assumptions are seldom or never satisfied.... But...[with] an aggregate volume of output corresponding to full employment as nearly as is practicable, the classical theory comes into its own again.... There is no objection to be raised against the classical analysis of the manner in which private self-interest will determine what in particular is produced, in what proportions the factors of production will be combined to produce it, and how the value of the final product will be distributed... no objection to be raised against the modern classical theory as to the degree of consilience between private and public advantage.... Thus I agree with Gesell that the result of filling in the gaps in the classical theory is not to dispose of the ‘Manchester System’, but to indicate the nature of the environment which the free play of economic forces requires if it is to realise the full potentialities of production...

Yet, writing from the Earthly Paradise that is San Diego, CA, the very sharp Jim Hamilton disagrees:

Jim Hamilton: Economic importance of China: "How important would an economic downturn in China be for the United States?...

...Paul Krugman reviews... reasons why... [we] shouldn’t worry too much.... I’ve long believed that to understand business cycles we need to consider not just net flows but also gross interdependencies.... While China may only account for 15% of world GDP, it has been a huge factor in commodity markets... 55% of the increase in global petroleum consumption between 2005 and 2013.... Arezki and Matsumoto note that China now accounts for about half of global consumption of iron ore, aluminum, copper, and nickel.... U.S. exports of goods and services to China... [are] only about 1% of U.S. GDP. But U.S. investment in mining structures (explorations, shafts, and wells) amounted to $146B at an annual rate in 2014:Q4. By the second quarter of this year that number was down to $89B, largely a result of cutbacks in the U.S. oil patch.... This development alone has already subtracted about 0.3% from U.S. GDP.... Another concern comes from financial linkages.... I don’t know what the ultimate implications for the U.S. of a significant recession in China would be. But things I don’t know cause me to worry.

If we take the current shock to oil-patch investment of 0.3% of GDP to be half the shock from China, right now the shock from China is one-quarter of the 2005-2007 shock from the housing market that the U.S. economy was adjusting to and shrugging off without much difficulty until the financial crisis began the collapse of Wall Street. Thus, IMHO, the major lesson of 2005-7 is that for the macroeconomy it is finance and only finance--plus the ability of the government to react properly and in a timely fashion--that matters. A sectoral shock one-quarter as large as 2005-7, or indeed one-sixth as large as 1999-2001, ought not to matter much at all.

Why I Believe Paul Krugman Over Jim Hamilton: Why a Chinese Slowdown Is by itself Little Threat to the U.S. Economy

Over at Equitable Growth: The collapse of housing investment in the U.S. after the bubble pop began in late 2005 was absolutely huge: