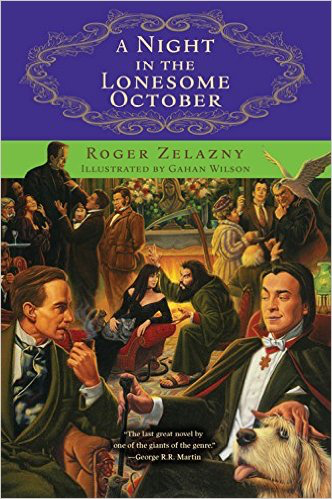 Max Gladstone (2014): Humorous Exposition: Roger Zelazny’s A Night in the Lonesome October: "‘I like being a watchdog better than what I was...

...before [Jack] summoned me and gave me this job.’

When I encountered this line for the first time, on page 2 of Roger Zelazny’s A Night in the Lonesome October, I cracked up. I didn’t get the line’s full genius, though, until I finished the book.

See, Zelazny writes science fiction and fantasy so dense even the most cursory outline of his novels makes them sound like crackfic. Take Creatures of Light and Darkness, for example: the late stage of a civil war between cybernetically enhanced maybe-gods at the end of time, featuring temporal kung fu, blind tinkering Norns, banjo-playing revolutionaries, a quest for a pair of holy tennis shoes, dueling augurs, poetic interpolation, prophecy computers, the Possibly Proper Death Litany, a centaur, God, and, as Pandora would say, ‘complex tonality.’ Yet, at something like 50,000 words, it’s less than half the standard length of a novel. Most books would strain to include any two of these conceits, but Zelazny wraps them all together in a madcap smorgasbord of invention. He makes it work, I think, because of his genius for suggestion. Why waste narrative space detailing a concept when you can drop a single perfect line and let the reader build her own conclusions?

The sentence at the top of the article is my favorite example. A Night in the Lonesome October is nuts—an enormous monster mash featuring Dracula (sorry, ‘The Count’), witches, Lovecraftian vicars, Sherlock Holmes, Jack the Ripper, et al as participants in a Game of mysterious significance. (No, not of Thrones.) Our first-person narrator, naturally, is Jack the Ripper’s dog, Snuff. He very much likes being a watchdog. He’s quite good at it. And, as we learn in Chapter One: he likes being a watchdog better than he liked what he used to be.

This one sentence does more expository work than most backstory chapters.

It tells everything you need to know about Snuff and Jack. The simple language says ‘dog,’ but its slight edge suggests the hardboiled voice of detective novels and Zelazny’s own Chronicles of Amber. And that word, summoned—whatever Snuff was before, it was something you could summon. A demon might fit the bill, or an angel, or some horrible squamous thing from beyond time. Jack, we learn here, is (along with his other proclivities) a person who summons things—normally not a good sign, but Snuff seems nice enough to the reader, so maybe Jack is too. And on the whole, the space from which Jack summoned Snuff sounds worse than Earth (viz. the singing understatement of ‘better’), which in turn suggests all sorts of multiversal horror pits beyond our little circle of firelight. Snuff’s summoning isn’t a plot point in the novel. He’s never released from his doggie shell or anything. It’s a single line that builds an entire world for the book, like a brushstroke mountain in a Watanabe Shiko landscape.

And, of course, it’s a damn good laugh.