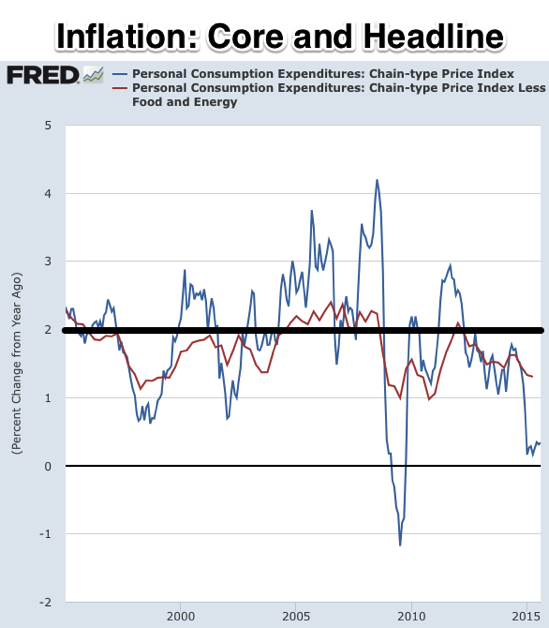 It would be one thing to raise interest rates if it were the unanimous consensus of the committee that it was time to do so. It is quite another, in a world of uncertainty and the need for prudent risk management. It's quite another to risk making unrecoverable errors by endorsing those whose positions have been wrong in the past over the objections of those whose positions have been right.

...a direct challenge to Chair Janet Yellen and Vice Chair Stanley Fischer. Is was, as they say, a BFD. That, at least, is my opinion.... [She] stands in sharp contrast with Yellen and Fischer. Their efforts have been spent on explaining why rates need to rise soon. Hers... on why they do not.... Brainard asserts....

I do not view the improvement in the labor market as a sufficient statistic for judging the outlook for inflation. A variety of econometric estimates would suggest that the classic Phillips curve influence of resource utilization on inflation is, at best, very weak....

Recall that Yellen, in her most recent speech, made the Phillips Curve the primary basis for her case that rates will soon need to rise.... While Yellen sees the risks weighted toward rebounding inflation, Brainard sees the opposite. Moreover, policymakers have been twiddling their thumbs as the world economy turns against them:

Over the past 15 months, U.S. monetary policy deliberations have been taking place against a backdrop of progressively gloomier projections of global demand. The International Monetary Fund (IMF) has marked down 2015 emerging market and world growth repeatedly since April 2014.

While all of you have been arguing about when to raise rates, the case for raising rates has been falling apart!... [Brainard] calls for different risk management:

The Fed can't cut rates quickly, but they can raise rates quickly.... Suppose that the Fed needs raise rates at twice the pace they currently anticipate.  What does that mean? 25bp at every meeting instead of every other meeting? Is that really an 'abrupt tightening?' Not sure that Yellen has a very strong argument here. Or one that would withstand repeated attacks from her peers.... I think Yellen wants to raise interest rates. I think Fischer wants to raise rates.  I think both believe the downward pressure on inflation due to labor market slack is minimal, and the Phillips Curve will soon assert itself. I think both do not find the risks as asymmetric as does Brainard.... I think that Brainard knows this. I think that this speech is a very deliberate action by Brainard to let Yellen and Fischer know that she will not got quietly into the night.... And now that Brainard has laid down the gauntlet, it will look very, very bad for Yellen and Fischer if their plans go sideways....

Brad DeLong suggested the Fed commit to one of two policy messages:

I must say that they are not doing too well at the clear-communication part. I want to see one of following things in Fed statements:

If we had one of these, we would know where we stand.

But Stan Fischer's speech provides us with neither.

I think that Fischer wants the first option, but knows Brainard’s views, and hence knows that December is not a sure thing if Brainard can build momentum for her position. Hence the muddled message. Brainard could be the force that drives the Fed toward option number two... closer to that of Evans and... Kocherlakota.... This is the most exciting speech I have read in forever...

As a matter of economic reality, Brainard is correct: The lesson of Staiger, Stock, and Watson (1997) is that the Phillips Curve is much too imprecisely-estimated to weigh as more than a feather in the scales to reduce uncertainty about the state of the economy two years from now. The risks are asymmetric: The option to change course and quickly neutralize the effects of your past year's policies is a very valuable one. Raising interest rates and starting a tightening cycle throws away that option. You can always raise interest rates quickly and further and undo the effects of being behind the curve in withdrawing monetary stimulus. You cannot lower interest rates below zero and undo the effects of premature tightening away from the zero lower bound.

As I have repeatedly said, the mystery is why the lessons of SSW and the asymmetry of the risks have not been the decisive arguments among the serious members of the FOMC all along.

It would be one thing to raise interest rates if it were the unanimous consensus of the committee that it was time to do so. It is quite another, in a world of uncertainty and the need for prudent risk management. It's quite another to risk making unrecoverable errors by endorsing those whose positions have been wrong in the past over the objections of those whose positions have been right.