Well, we had an all-out Thanksgiving Dinner yesterday. Actually it was supper for that was when most of the students would be there. 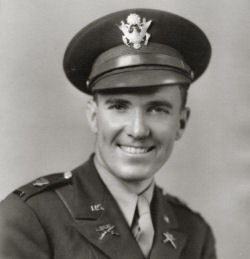 We got an enormous chunk of turnkey, which was really delicious, diced sweet potatoes, dressing and gravy, asparagus, carrots, lettuce, cranberry sauce, bread, butter, coffee, dried fruits, hard candy and pumpkin pie. They originally had ice cream scheduled too but gave us that at noon instead.

The mess hall itself is not too attractive. It is cafeteria style, which is OK. I like that. But the tables are bare and instead of dishes we've had these many months in Germany and at the Officers Mess here, they have tin cafeteria trays from which you eat. They are practical but rather bleak and not always clean.

They don't celebrate Thanksgiving here in France, of course, so there was not much change in activities. We learned yesterday there is to be an exhibit next month of some of our work. The show will be for a week about the 10th of the month. So far I have only one painting far enough along to show. It's not going too well either so I hope I have something finished. This early show gives rife to rumors of an early closing for the whole business, which I mentioned before. As a matter of fact, there appears a strong possibility of the whole thing folding up by 21st Dec. This is considerably earlier than originally scheduled and will have me bouncing around a replacement depot for the holidays.

That being so, don't send anything more in the way of packages or film. The former won't reach me and the weather has been so bad I haven't been able to take pictures outside for about two weeks. Day after day is cold and gray and most have a heavy fog which lasts right on through the night. I have ample film for all I can take now.

The brushes came Wednesday but the coffee still hasn't shown up.

I opened the fruit cake yesterday. After puzzling around to see how it opened, I finally sawed the top off with my knife. But it was worth the effort. It certainly is delicious and well-filled with fruit and nuts. I gave some to some French people where I've eaten several meals and they were wild about it. We ate some while we drank tea and it really went well.

The other day I opened one of the Xmas boxes. This one proved to have candy, nuts and fudge in it. Everything was in perfect shape. The fudge was quite creamy and I put it on the window ledge to cool overnight, first re-wrapping it. In the morning I found it had picked up a slight mold. I scraped this off, however, and left it in the room. It kept fine for as long as it lasted. Were I sure of being here longer, I'd have you send some more. The caramels and nuts are good also. Many thanks to all the donors.

I've had a hankering for Chinese food. After prowling around I found a Chinese restaurant just off the Champs Elysees. Last Sunday night I took a French girl there for dinner. The place was jammed with Americans. The girl had never eaten Chinese food and was none too enthusiastic so I ordered light, much to the disgust of the waiter. I got one egg foo young (and I am sure there was literally only one egg!), one order of chicken chop suey, a bowl of rice, bread (no butter) and tea. They had no sweet wine so we didn't get any of this fortunately. Both the foo young and chop suey were a terrific disappointment. There were a few vegetables and some skimpy pieces of chicken in the chop suey and as I said the foo young had just one egg, I am sure, and a few vegetables. It was all hashed up instead of being in a kind of pancake as in the U.S. Anyway this little meal totaled $7.00.

I was afraid of being too full for we two had eaten a whole fruit pie about an hour and a half earlier. But the dinner didn't make even a dent. The fruit pie was good, though not so good as it looked, for it lacked a little sugar and the crust was rather hard like a thin, brittle waffle. It was open face and had three kinds of fruit - red cherries, white cherries and apple. The cost? 1.15 francs - $2.30.

I'm writing this in bed and it's getting rather uncomfortable so I think I'll close.

Although I think I've answered this question before, I'll re-do the info on your question in your last letter. I am not on terminal leave. I am on regular duty status, but am on detached service to attend this school. I am in school under quotas offered by the Army's Information and Education Program and am in the section known as TWCA or 'Training Within Civilian Agencies.'

Well, we had an all-out Thanksgiving Dinner yesterday. Actually it was supper for that was when most of the students would be there.