Liveblogging the American Revolution: December 16, 1777: The March to Valley Forge 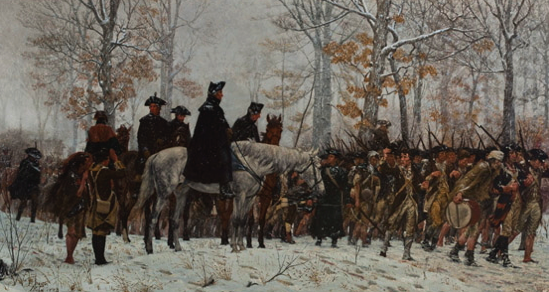 Trego was inspired by a passage from Washington Irving’s Life of George Washington: ‘Sad and dreary was the march to Valley Forge...’ and this passage was printed in the catalogue for the 1883 exhibition. The painting became the focus of a famous controversy when Trego sued the Pennsylvania Academy after receiving only the third prize in the annual Temple competition, despite the judges’ decision that his painting was the best of those entered. Though Trego ultimately lost the case in the Pennsylvania Supreme Court in 1886, the two years of scandal provided the young artist with excellent publicity for his work. It is sometimes suggested that the young soldier saluting Washington is a portrait of the artist himself, but if Trego intended this, the resemblance is not strong.

To assure a balanced composition on such a large canvas populated with so many figures, Trego utilized various geometrical schemes, including the classical device of the golden section to position key individuals and vignettes for best effect. The horse in the exact center is looking directly at us, a device intended to draw us into the scene. The foreground grouping, which includes Washington and the two figures saluting him on either side, are framed within a space defined by two superimposed golden rectangles measured in from each end of the painting. A pyramid formed by drawing lines from the center top point down to each bottom corner further serves to define the space with Washington and the young soldier saluting him, and it determines the position of a gun which is held exactly parallel to that line. The poignant group of three men at the head of the line of march are in their own space just outside the space defined for the rest of the foreground figures.

PROVENANCE: Purchased from Newman Galleries in Philadelphia, 7 March 1931, by the Valley Forge Historical Society, which held ownership of the painting until the formation of the American Revolution Center, to which ownership was then transferred."

Liveblogging the American Revolution: December 16, 1777: The March to Valley Forge