John Cochrane is quite critical of Robert Shiller.... He... thinks that Shiller is trying to make finance less quantitative and more literary (I somehow doubt this, given that Shiller is first and foremost an econometrician, and not that literary of a guy).

But the most interesting criticism is about Shiller's interpretation of his own work. Shiller showed... stock prices mean-revert. He interprets this as meaning that the market is inefficient and irrational... "behavioral craziness". But others--such as Gene Fama--interpret long-run predictability as being due to predictable, slow swings in risk premia.

Who is right? As Cochrane astutely notes, we can't tell who is right just by looking at the markets themselves. We have to have some other kind of corroborating evidence. If it's behavioral craziness, then we should be able to observe evidence of the craziness elsewhere in the world. If it's predictably varying risk premia, then we should be able to measure risk premia using some independent data source...Let's back up to do some explaining...

When economists think about the prices rational people are willing to pay for financial security, they assume that they ask six questions:

Now look at the stock market since 1880: 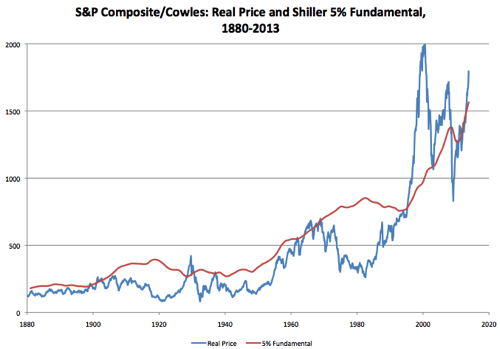 The blue line is the inflation-adjusted value of a representative basket of stocks--or equity claims to the assets and future profits of America's companies.

The red line is what you would be willing to pay for a basket of stocks if your answers to (2) through (6) made you willing to pay 20 times the fundamental earning power of the companies whose stocks you are buying, and if you calculated that fundamental earning power by simply taking a ten-year lagged moving average of the earnings that the companies report. It is thus a crude and simple-minded measure of "fundamentals"--ignoring variations in the amount of upside (3) and downside risks (4), ignoring variations in willingness to pay (5) for a given amount of upside and desire to insure (6) against a given amount of downside risk, and ignoring variations in the slope of the intertemporal price system (2).

The variations of the price at which the stock market sells around this crude and simple-minded measure of fundamentals are enormous: I am not aware of any serious economist today who thinks it more likely than not--or even possible--that the big swings of the market around the crude Shiller fundamental occur because the market knows more about the current earnings power of operating companies.

For one thing, these two effects nearly offset each other in general equilibrium: situations in which we mark up expected future values are situations in which we expect to be rich and so mark down the marginal value of wealth in the future. For another, news about the importance of technological revolutions arrives slowly and continuously over decades--it doesn't look at all like the changes in the market relative to the crude Shiller fundamental.

I am not aware of any serious economist today who thinks it more likely than not--or even possible--that the big swings of the market around the crude Shiller fundamental occur because the market is changing its assessment of future earnings growth or of the slope of the intertemporal price system.

(C) Do these big swings relative to the crude Shiller fundamental primarily occur because the market gets it wrong? The market is a voting mechanism that aggregates and averages the wealth-weighted views of the current crop of active traders. As the lucky double-down and the unlucky vanish and as the herd of investors are buffeted by fads and fashions, they buy and sell and push prices up and down, and the little bit of sober long-horizon smart money in the market is unable to do much to damp the irrational bull-market bubble of the late 1920s and the late 1990s or the bear bubble of the 1970s.

This is Bob Shiller's view. This is my view. This is Andrei and Jeremy's view. This is, I think, Noah's view--but as an untenured junior faculty member who will someday need a broad spectrum of supporting outside letters, he is... diplomatic. Note the role of "astutely" in the paragraph I quoted from Noah above...

(D) Do these big swings relative to the crude Shiller fundamental primarily occur because of changes in upside and downside risk (3) and (4)? This is the fearfully intelligent Robert Barro's and T.A. Reitz's view. I at least think his model doesn't fit the data very well. But the discussion is ongoing, and it is definitely a possibility: some at least of the 1933, 1975, and 2008-9 troughs in the market were due to a sudden increase in the perceived risk that things would go to hell in a hand basket.

(E) Do these big swings relative to the crude Shiller fundamental primarily occur because of shifts in (5) and (6), because of "time varying risk premia"--that sometimes the marginal utility of wealth of everyone's utility is constant and so people are indifferent between a lifetime income of $2,000,000 with certainty and a 1/3 chance of getting a lifetime income of $4,000,000 accompanied by a 2/3 chance of getting only $1,000,000; and sometimes the marginal utility of wealth is steeply curved so that people really, strongly prefer the first; and preferences are so unstable that society's preferences as a whole rapidly shift from one state to another in a matter of little more than months.

Now when Gene Fama and John Cochrane and company back in the 1980s raised this as their interpretation of Bob Shiller, I at first thought really did think it was a joke--my genuine reaction was "you're putting me on".

The curvature of any individual's utility function--how close any individual is to material satiation given current technological possibilities--is a deep psychological parameter that would require a radical rewiring of the brain to accomplish. Yet Fama, Cochrane, and company propose that such rewirings took place between 1996 and 2000, and that the rewirings were then unrewired between 2000 and 2002? Even if some individual has a Damascus moment and decides that while they value all of their current wealth greatly they would value extra wealth not at all--the kind of thing you need to have happen in order to account for the 2000-2002 movements in the stock market--that is just one individual. Fama, Cochrane, and company require that these complete neural rewirings happen to nearly everybody in the entire economy, because in a rational financial market risk is carried by those who are the least risk-averse--who are least subject to sudden satiation--and if one person's brain becomes rewired somebody else who was almost as far from satiation will take up the slack.

Let's go back to Noah:

Personally I suspect that it's behavioral spazzing....

Here I become very uneasy with the state of dialogue. Noah writes "So if these stated expectations really do represent investors' beliefs..." How could they not? Is Noah saying that people are misleading Andrei and Jeremy? No. He is saying that perhaps people do not actually believe what they think they believe--or, rather, that when economists talk about how somebody has a "belief" they are not referring to what people actually believe but to something else that is not a belief but that economists find convenient to say is a belief or to call a belief. This way, it seems to me, lies madness.

Cochrane has suggested that people responding to these surveys are not reporting their true beliefs, but rather their "risk-neutral probabilities".... If that's true, then these surveys wouldn't be good evidence of behavioral spazzing. So the issue has not been decided yet...

Now when I taught and when I discuss finance with the graduate students both in the Econ Department and at the Haas Business School, I find as a rule that only one in five or so is actually able to understand and use risk-neutral probability measures to analyze a situation. (This may be because "risk-neutral probabilities" may be the worst-named concept in economics: they are not probabilities, and they are definitely not risk-neutral.) To claim that we should model investors' thought processes and claim that they are rational utility-maximizers using concepts that most people with graduate training in finance do not understand seems... silly.

But progress has been made. In my opinion, the available evidence is suggestive of the "behavioral spazzing" explanation, but not conclusive. The important thing is that this is not one of those "this will never be resolved" sorts of debates. This is a debate that can and will be resolved, as better and better data becomes available. Science progresses.

But let me be skeptical. Let's replay the debate:

More important: the excess volatility/return predictability we see in episodes like 1996-2000, 2000-2002, 2007-2009, 2009-2013, 1920-1929, 1900-1904, and so forth has a half-life of ten years. That means that in Fama and Campbell's schema that in 2000--when the market price was twice its 5% Shiller fundamental--the expected one-year real return on the market was the 5% fundamental return minus a 10% "mean reversion of risk premia back to their norm" term. I don't care how far from satiation your marginal utility of wealth is: nobody rational should have been holding their pro-rata share of equities in 2000, and to claim that the people doing so had simply decided that they were less risk-averse than normal is... something that leads words to fail me...

So I look at the situation, and I have to judge that those who explain aggregate stock market deviations from the crude Shiller fundamental as driven by rational agents' revising their views of the curvature of their utility functions are people--some of them very smart indeed, some of them not smart at all--who are themselves in an irrational intellectual bubble. They really do appear to me to be people who ought to have been persuaded by Shiller a generation ago. They were not. And so now they are are turning their smarts to constructing reasons to justify their not having been persuaded.

And, in so doing, I think that they are not acting very intelligently.

Thus I am less optimistic than Noah about how, or whether, this thing will be settled in my lifetime. We have already progressed to the stage of "people's beliefs are not what they believe". Where will we go next? I do not know. But I do not expect to see intellectual convergence to what I think is the justified true belief: that Bob Shiller is right.

John Cochrane is quite critical of Robert Shiller.... He... thinks that Shiller is trying to make finance less quantitative and more literary (I somehow doubt this, given that Shiller is first and foremost an econometrician, and not that literary of a guy).