John Holbo: Walton’s Republic: What is Athene’s motive in dragging all those robots from the future to help build this thing?...

Brad DeLong: Re: ‘What is Athene’s motive in dragging all those robots from the future to help build this thing?’ Aristoteles son of Nikomakhos of Stagira: 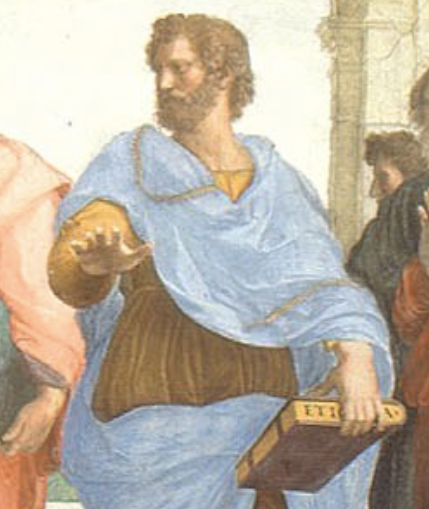 Aristoteles: Let us first speak of master and slave, looking to the needs of practical life…. [Some] affirm that the rule of a master over slaves is contrary to nature…. Property is a part of the household… no man can live well, or indeed live at all, unless he be provided with necessaries…. [T]he workers must have their own proper instruments… of various sorts; some are living, others lifeless; in the rudder, the pilot of a ship has a lifeless, in the look-out man, a living instrument….

If every instrument could accomplish its own work, obeying or anticipating the will of others, like the [automated] statues of Daedalus, or the [self-propelled catering carts] of Hephaestus, which, says the poet, ‘of their own accord entered the assembly of the Gods’; if, in like manner, the shuttle would weave and the plectrum touch the lyre without a hand to guide them, chief workmen would not want servants, nor masters slaves…

But is there any one thus intended by nature to be a slave, and for whom such a condition is expedient and right?… There is no difficulty in answering this question… that some should rule and others be ruled is a thing not only necessary, but expedient; from the hour of their birth, some are marked out for subjection, others for rule…

Neville Morley: @Brad De Long #1: yes, I was wondering about that passage, via Marx’s sarcastic gloss on it (someone else will surely remember the precise quote, but it’s words to the effect of:

but didn’t feel that it got developed in the novel as much as it might have been--and then by the second book most of the robots have simply gone.

Karl Marx: ’If,’ dreamed Aristotle, the greatest thinker of antiquity:

If every tool, when summoned, or even of its own accord, could do the work that befits it, just as the creations of Daedalus moved of themselves, or the tripods of Hephaestos went of their own accord to their sacred work, if the weavers’ shuttles were to weave of themselves, then there would be no need either of apprentices for the master workers, or of slaves for the lords.

And Antipatros, a Greek poet of the time of Cicero, hailed the invention of the water-wheel for grinding corn, an invention that is the elementary form of all machinery, as the giver of freedom to female slaves, and the bringer back of the golden age.

Oh! those heathens! They understood, as the learned Bastiat, and before him the still wiser MacCulloch have discovered, nothing of Political Economy and Christianity. They did not, for example, comprehend that machinery is the surest means of lengthening the working-day. They perhaps excused the slavery of one on the ground that it was a means to the full development of another. But to preach slavery of the masses, in order that a few crude and half-educated parvenus, might become ‘eminent spinners,’ ‘extensive sausage-makers,’ and ‘influential shoe-black dealers,’ to do this, they lacked the bump of Christianity.

Brad DeLong: And I should bring Paul Krugman onstage:

We can imagine a world where all services are provided as well. We have robots or something to do the services. But in order to do the full range of stuff we want they have to be very intelligent. In which case, aren’t those then people? The actual issue is: A world where you have servitors of some kind who will give you everything you want is a world where it’s very hard to tell the difference between servitors and slaves. So I think there’s--arguably--a dark side to the abundance theory.

John Holbo: Walton’s Republic: What is Athene’s motive in dragging all those robots from the future to help build this thing?...

Brad DeLong: Re: ‘What is Athene’s motive in dragging all those robots from the future to help build this thing?’ Aristoteles son of Nikomakhos of Stagira: