Must-Read: Jared Bernstein: 2015 Was Solid Year for Job Growth: "Payrolls were up 292,000 in December and the unemployment rate held steady at a low rate of 5%...

...in another in a series of increasingly solid reports on conditions in the US labor market. Upward revisions for the prior two months added 50,000 jobs, leading to an average of 284,000 jobs per month in the last quarter of 2015. In another welcome show of strength, the labor force expanded in December, leading the participation rate to tick up slightly.

December’s data reveals that US employers added a net 2.7 million jobs in 2015 while the unemployment rate fell from 5.6% last December to 5% last month. While the level of payroll gains did not surpass 2014’s addition of 3.1 million, it was otherwise the strongest year of job growth since 1999.

Simply put, for all the turmoil out there in the rest of the world, the US labor market tightened up significantly in 2015.... We are not yet at full employment. But we’re headed there at a solid clip, and that pace accelerated in recent months... 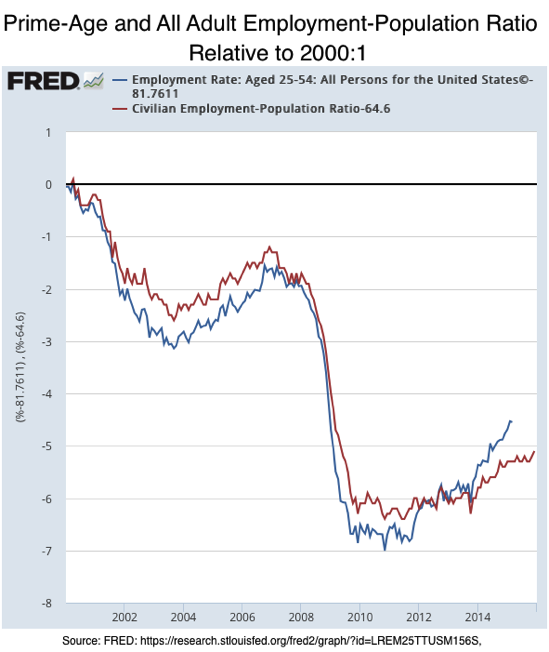 It thus looks very much to me like the effects of slack demand--both immediate, and knock-on effects via hysteresis. And what demand has done, demand can undo. Perhaps it cannot be done without breaching the 2%/year inflation target, but: Must-Read: Jared Bernstein: 2015 Was Solid Year for Job Growth: "Payrolls were up 292,000 in December and the unemployment rate held steady at a low rate of 5%...