...persistently and dramatically since mid-2014. This decline means that the Federal Open Market Committee (FOMC)  is confronting a significant risk to its credibility. It must act aggressively in the near-term to eliminate this risk.

It is true that there are two possible explanations for this decline in market-based measures of long-term compensation. The first explanation is that should be viewed as a transitory phenomenon, due to some mysterious (to me) interaction between the market for inflation-protected TIPS bonds and declining oil prices. The second is that the decline means that market participants believe that the FOMC will be unable or unwilling to keep inflation as high as 2% on a sustainable basis.  This interpretation seems a lot less mysterious to me, since the FOMC continues to tighten policy in the adverse of severe disinflationary headwinds (associated in part with the decline in oil prices).

There’s no easy way to tell these stories apart in the data.  But this challenge is irrelevant for policymakers.  The first story simply tells policymakers to ignore the decline in longer-term breakevens. Because the first story makes no specific policy recommendation, policymakers can simply ignore the possibility that it is true.  (Things would be different if, for example, the first story argued in favor of tighter monetary policy.)

In contrast, as long we put the slightest weight on the second story of declining credibility being true, it matters considerably for policy.  The FOMC’s tightening cycle is systematically lowering longer-term inflation expectations generally, and especially during future recessions.   The erosion of credibility means that real interest rates will be higher whenever the Fed is at the zero lower bound in the future - and that means lower employment and prices in those times.  (You can start to see the potential for a self-fulfilling trap that has so many so concerned.)

All central bankers agree that, without anchored inflation expectations, a central bank cannot be effective at achieving its price and employment objectives.   That’s why the main mission of a central bank is to keep inflation expectations well-anchored.  The evidence continues to mount that the FOMC is failing at this task. The Committee needs to confront this significant credibility threat by reversing its tightening cycle quickly and decisively. 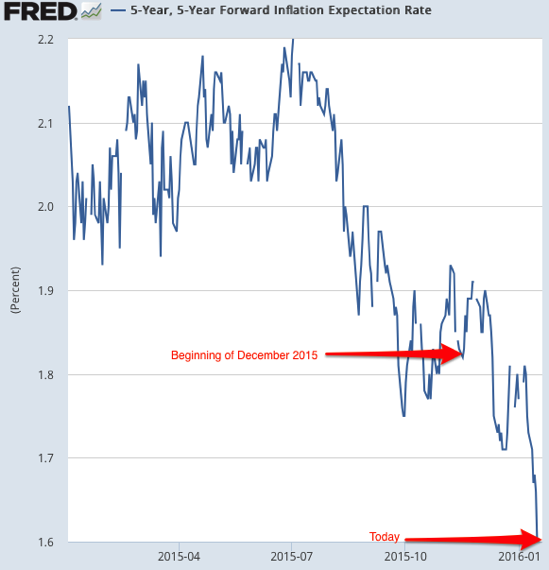