Wikipedia: Ferdinand II of León: "Born in Toledo, Castile, he was the son of King Alfonso VII of León and Castile and of Berenguela, of the House of Barcelona...

...At his father's death, he received León and Galicia, while his brother Sancho received Castile and Toledo. Ferdinand earned the reputation of a good knight and hard fighter, but did not display political or organising faculty. 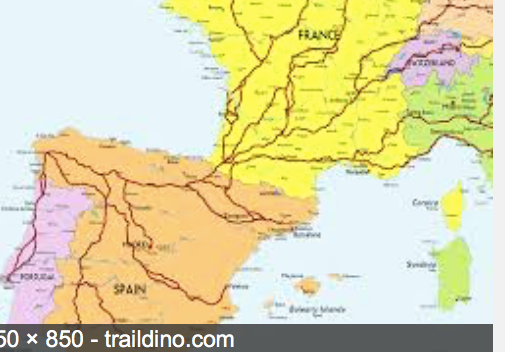 He spent most of his first year as king in a dispute with his powerful nobles and an invasion by his brother Sancho III. In 1158 the two brothers met at Sahagun, and peacefully solved the heritage matters. However, Sancho died in the same year, being succeeded by his child son Alfonso VIII, while Ferdinand occupied parts of Castile. The boundary troubles with Castile restarted in 1164: he then met at Soria with the Lara family, who represented Alfonso VIII, and a truce was established, allowing him to move against the Muslim Almoravids who still held much of southern Spain, and to capture the cities of Alcántara and Alburquerque. In the same year, Ferdinand defeated King Afonso I of Portugal, who, in 1163, had occupied Salamanca in retaliation for the repopulation of the area ordered by the King of León.

In 1165 he married Urraca, daughter of Afonso of Portugal. However, strife with Portugal was not put to an end by this move. In 1168 Afonso again felt menaced by Ferdinand II's repopulation of the area of Ciudad Rodrigo: he then attacked Galicia, occupying Tui and the territory of Xinzo de Limia, former fiefs of his mother. However, as his troops were also besieging the Muslim citadel of Badajoz, Ferdinand II was able to push the Portuguese out of Galicia and to rush to Badajoz. When Afonso saw the Leonese arrive he tried to flee, but he was disabled by a broken leg caused by a fall from his horse, and made prisoner at one the city's gates. Afonso was obliged to surrender as his ransom almost all the conquests he had made in Galicia in the previous year. In the peace signed at Pontevedra the following year, Ferdinand got back twenty-five castles, and the cities of Cáceres, Badajoz, Trujillo, Santa Cruz and Montánchez, previously lost by León. When in the same years the Almoravids laid siege to the Portuguese city of Santarém, Ferdinand II came to help his father-in-law, and helped to free the city from the menace.

Also in 1170, Ferdinand created the military-religious Order of Santiago de Compostela, with the task to protect pilgrims travelling to the tomb of the apostle James in the cathedral of Compostela. The order had its seat first in Cáceres and then in Uclés.

In 1175 Pope Alexander III annulled Ferdinand II and Urraca of Portugal's marriage due to consanguinuity. The King remarried to Teresa Fernández de Traba, daughter of count Fernando Pérez de Traba, and widow of count Nuño Pérez de Lara. In 1178 war against Castile broke out. Ferdinand surprised his nephew Alfonso VIII, occupied Castrojeriz and Dueñas, both formerly lands of Teresa's first husband. The war was settled in 1180 with the peace of Tordesillas. In the same year his wife Teresa died while bearing their second son.

In 1184, after a series of failed attempts, the Almohad caliph Abu Yaqub Yusuf invaded Portugal with an army recruited in Northern Africa and, in May, besieged Afonso I in Santarém; the Portuguese were helped by the arrival of the armies sent by the archbishop of Santiago de Compostela, in June, and by Ferdinand II in July.

In 1185 Ferdinand married for the third time to Urraca López de Haro (daughter of Lope Díaz, lord of Biscay, Nájera and Haro), who was his mistress since 1180. Urraca tried in vain to have Alfonso IX, first son of Ferdinand II, declared illegitimate, to favour her son Sancho.

Ferdinand II died in 1188 at Benavente, while returning from a pilgrimage to Santiago de Compostela. He was buried in the cathedral of Compostela.

Wikipedia: Ferdinand II of León: "Born in Toledo, Castile, he was the son of King Alfonso VII of León and Castile and of Berenguela, of the House of Barcelona...

...At his father's death, he received León and Galicia, while his brother Sancho received Castile and Toledo. Ferdinand earned the reputation of a good knight and hard fighter, but did not display political or organising faculty.