ObamaCare: How Is It Doing? 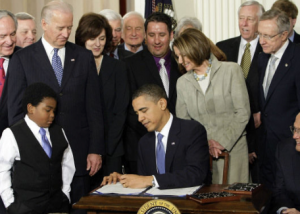 There have been three very surprising things with respect to Obamacare implementation so far.

The first is the surge in enrollment in employer-sponsored insurance. The fear was that people and employers would find the coverage offered on the exchanges irresistible, and that there would be a great deal of disruptive churn as the exchanges started up. The penalty for large employers who did not offer health insurance was constructed to guard against this. Yet it seems to have been needless. The appearance of the exchange option appears to have led to more rather than fewer employers offering insurance. 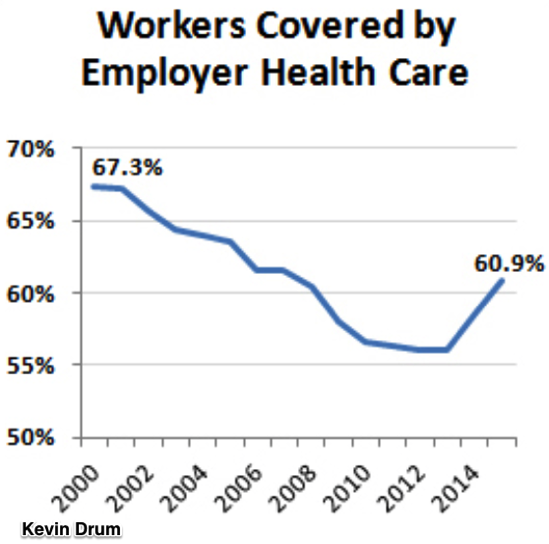 This is a problem for economists: alternatives are supposed to be at most irrelevant, and certainly their appearance is not supposed to lead to more people voting with their feet for something that was always there. This is a victory for psychologists and sociologists, who if they did not predict this consequence are at least unsurprised by it. The implementation of Obama care thanks health insurance more salient in workers’ minds, and so more highly valued. This shift in valuation induces more employers to offer it as they try to find their compensation sweet spot.

The second surprising thing is the failure of national health expenditures to rise as ObamaCare has been implemented more rapidly than was projected in the baseline. There was, everyone agreed, a great deal of pent-up demand for medical care from people who had been unable to get affordable insurance. When this wave hit, everybody expected, spending would surge--especially as, while ObamaCare did a great deal to expand demand for medical services, it did little to expand supply. The initial surge would, people thought, eventually ebb. But the ebb would leave national health spending on a higher trajectory: people who had not had access to affordable medical care would have it, and they would use it.

The hope of ObamaCare’s advocates was that a system with near-universal coverage would be a more rational and more cost-conscious system. Rather than treating patients and then scrambling for someone with deep pockets who could be made to pay not only their own but others’ bills, a rational calculus of treatment costs and benefits would become at least possible. And, down the road, this plus increased competition would bend the cost curve—and, if not, then whatever additional regulatory steps would turn out to be necessary would be taken.

But the cost curve bent itself.

The cost curve bent itself before Obamacare implementation even began.

And the bending of the cost curve continues. Some attributes the bending to the lesser depression and to a consequently poor society.

As a full explanation, this seems highly strained. Once again, it looks like a victory for the psychologists and the sociologists. The public debate around ObamaCare raised the salience of cost control, of avoiding overtreatment, and of being good stewards of what might be increasingly limited medical care resources in a context in which more people were able to draw on those resources.

All in all: a substantial surprise for us economists. Perhaps we should be cast down from our high seats in the Ttmple of policy analysis?

And there is, of course, the third surprising thing about ObamaCare implementation.

The unreliable rumor on the street is that when Chief Justice Roberts decided to rewrite the Affordable Care Act from the bench—lawlessly, in a technical sense: in a manner with no support in president, law, or the Constitution—Roberts and his clerks thought that they were throwing Americas right wing a bone, but a nothingburger bone. The money to finance Medicaid expansion was more than free to the states: everybody who could do the arithmetic knew that as the federal government paid for the Medicaid expansion, other ancillary draws on state treasuries would decline, leaving states in a better fiscal position. One-third of the Medicaid expansion money would provide more employment in healthcare, as people without affordable access to medical care gained it. One-third would beef up the shaky finances of those healthcare providers who do treat Americas poor. And one-third would flow into the medical industrial complex which would no longer be informally taxed to pay for services that the federal government was now willing to pay for.

How could you turn this down?

Unless, that is, you are a psychopath or a madman for whom treating the poor and paying those who do treat the poor is a minus, Medicaid expansion was and is a no-brainer.

And even if you are a madman and a psychopath, you are also a politician. You draw heavily upon the medical-industrial complex for your campaign contributions. Would you seek to anger the MIC over real money, for nothing except a symbolic declaration that all of the works of the hated Kenyan-Muslim-socialist were rotten? Particularly since those works had originally been the core social policy platform of your own 2012 presidential nominee?

The answer is: yes.

Mad men, and psychopaths, and totally unfazed by the idea of inciting the ire of the MIC. Ohio Governor John Kasich said, apropos of his acceptance of Medicaid expansion money:

You know how many people were yelling at me? I go to events where people are yelling at me. You know what I tell them? I mean, God bless them, I'm telling them a little bit better than this. But I said, there's a book. It's got a new part and an old part. They put it together. It's a remarkable book. If you don't have one, I'll buy you one. And it talks about how we treat the poor…

And the response, from then Louisiana Governor Bobby Jindal and current South Carolina Governor Nikki Haley, was this:

At a closed-door donor forum in Palm Springs hosted by the Koch brothers, Kasich was attacked by two fellow Republican governors, Nikki Haley and Bobby Jindal, for, in the words of a source who attended the event, “hiding behind Jesus to expand Medicaid.” The source added, “It got heated”…

So: contrary to what sources who may or may not be reliable concerning Chief Justice John Roberts’s assumptions about the ability of some of his party colleagues to do the math, not a nothingburger bone of a concession at all…

Once again: we economists are in trouble. Politicians turning down free money? Politicians alienating powerful lobbying groups that are in large part inside their coalition for no gain?

Must-Read: Richard Mayhew: The Hope of Health Care Cost Stabilization: "We knew that there was going to be a massive amount of catch-up [health] care...

...as people who either were uncovered, sporadically covered or had no usable insurance because the cost sharing was atrocious got coverage through either Medicaid expansion or the Exchanges. The big question was always how much catch up care was happening and if/when would it subside as crisis care converted into maitenance care. There is starting to be some evidence that the catch up care wave is subsiding.... This uncertainty about catch-up care was why there were the three R’s of risk adjustment, risk corridors and re-insurance. No one knew how many expensive surprises were out there.

ObamaCare: How Is It Doing?

There have been three very surprising things with respect to Obamacare implementation so far.

The first is the surge in enrollment in employer-sponsored insurance. The fear was that people and employers would find the coverage offered on the exchanges irresistible, and that there would be a great deal of disruptive churn as the exchanges started up. The penalty for large employers who did not offer health insurance was constructed to guard against this. Yet it seems to have been needless. The appearance of the exchange option appears to have led to more rather than fewer employers offering insurance.