A Methodological-Moral Struggle Over the Sanders Economic-Policy Proposals 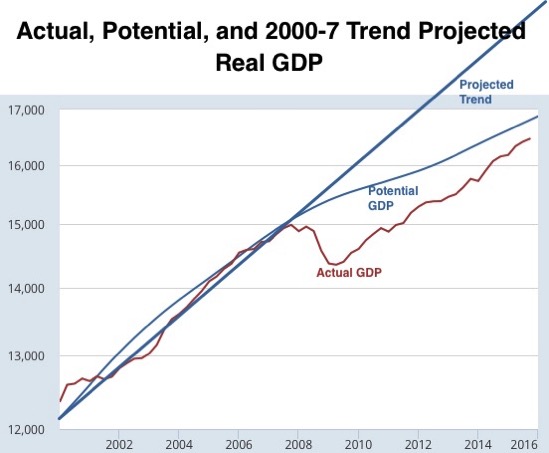 Paul Krugman weighs in, with another point for model-building as an intuition pump rather than as a filing system--if the model doesn't produce the results you want and think belong in your filing system, you should worry rather than simply throwing it out and getting another model. Plus a bunch of other issues--empirical, methodological, political, and--alas!--moral. Read MOAR

There are I think, three questions at issue here:

Paul Krugman: Economics and Self-Awareness: "Noah Smith has another interesting piece on methodology...

...inspired by the Friedman-Sanders economic projections controversy. His... ["]don’t let your economic analysis be dictated by what you want to be true, or what you think would be good for people to believe["]... is exactly right. But I think there’s a bit more to be said about... using... models, and why... they can be especially helpful on politically or emotionally charged issues.... You study an issue... [because] you care.... The trick is to do all you can to avoid motivated reasoning that validates what you want to hear.... [And] modeling is a helpful tool (among others) in avoiding that trap, in being self-aware when you’re starting to let your desired conclusions dictate your analysis....

Some of the best work I’ve ever done, I still believe, is my late-1990s analysis of the liquidity trap.... The origin... was an attempt... to prove something I believed... that Japanese monetary authorities were just falling down on the job, that they could end deflation if they would just try harder.... I had been making fun of people like William Greider.... I wanted to show that Japan posed no big challenge for that consensus, and offered no comfort for Greiderish thinking. Now, I was aware that IS-LM analysis didn’t support my complacency--but I was sure that this was just a limitation of that analysis, which after all was ad hoc about a lot of stuff, indeed didn’t necessarily honor all budget constraints. Surely if you stuffed money into the system it would have to go somewhere....

[But] the model... said that unless current monetary expansion raised expectations of future inflation, it wouldn’t have any effect at the zero lower bound... that the liquidity trap was real. I guess I could have thrown out the result and gone in search of another approach that told me what I wanted to hear — but what I did instead was rethink.... Oh, and the model also said positive things about fiscal policy--actually, a multiplier of one even with full Ricardian equivalence, although I bobbled that in the original paper, because I didn’t use the model carefully enough. That was definitely not what I was looking for.... And it seems to me that the worldview I reached after going through that process stood me in very good stead after 2008....

Am I always and everywhere innocent of motivated reasoning? Surely not--no saint, me. But I try to fight it. And I have no patience for people who are eager to assume that what they want to believe is true.

And let me put all of PGL here:

PGL: Friedman-Mason Version 4.0?: "I wish Gerald Friedman would stop writing lines like this:

When I conducted an assessment of Senator Bernie Sanders’ economic proposals and found that they could produce robust growth, the negative reaction among powerful liberal economists was swift and vehement…liberal economists have virtually abandoned Keynesian economics

The claim that economists like Christina and David Romer bought into the New Classical revolution is both absurd and dishonest. Friedman’s ‘assessment’ fell far short of an actual analysis as it only looked at the aggregate demand side. Putting aside whether his multipliers made sense, you cannot do an analysis without at least some consideration of potential output and it how it will grow between now and 2026. Menzie Chinn is a great place to start:

What Is the Assumed Output Gap in the Friedman Projections? Or, ‘Is current output really 18% below potential output?’ … I do not know what the output gap actually used in the Friedman study, as it is not reported….One thing that should be remembered is that the trend line extrapolated from 1984-2007 implies that the output gap as of 2015Q4 is … -18%. A graphical comparison which highlights the implausibility of the -18% output gap is shown below…By way of comparison, the CBO’s estimate is -2.2%... I want to stress that estimating potential GDP and the output gap is a difficult task.

Menzie is noting problems with Friedman-Mason Version 1.0 (the paper with no consideration of potential output) and Friedman-Mason Version 2.0, which assumes potential GDP has been growing at a 3.5% clip since the beginning of the century. This bizarre trendline analysis was how Lawrence Kudlow tried to tell us we were having a Bush boom. The reality is that average real GDP growth over the first 7 years of this century was only 2.5% and we ended 2007 near full employment. To his credit, J. W. Mason later accepted the premise that potential GDP growth was 2.5% for these years, as he noted that the CBO was forecasting this trend to continue through 2015. Friedman-Mason Version 3.0 would therefore suggest that the GDP gap at the end of 2015 was 10% not 18%. Brad DeLong raises this objection:

These are principal causes of 'hysteresis'. I do not believe that the output gap is the zero that the Federal Reserve currently thinks it is. But it is very unlikely to be anywhere near the 12% of GDP needed to support 4%/year real growth through demand along over the next two presidential terms. We could bend the potential growth curve upward slowly and gradually through policies that boosted investment and boosted the rate of innovation. But it would be very difficult indeed to make up all the potential output-growth ground that we have failed to gain during the past decade of the years that the locust hath eaten...

As I read what Brad has been saying, I would put the GDP gap at something closer to 5% rather than 10%. But let’s note how Dr. Friedman ended his latest:

We have a research agenda for many graduate student papers and dissertations. The strength of Verdoorn’s Law associating productivity growth with economic growth rates and the level of labor shortage. The impact of pro-growth government investment policies – including investment in Research and Development as well as investments in roads, bridges, and other public utilities. The investment accelerator and its role in fiscal stimulus, or in theories of secular stagnation. The determinants of changes in labor force participation and the effect of increasing employment opportunities. Responsiveness of immigration, especially undocumented, to labor demand. The sensitivity of US imports to economic growth, an issue complicated by the international role of the dollar.

I could get snarky and note that none of this was in his original paper. But is indeed a grand research agenda and I wish Dr. Friedman well as getting a credible analysis together would help in the fall elections as we know that Team Republican will have their analyzes for whatever they are worth.

Only after this was pointed out did they turn to declaring that the standard analysis was all wrong, and that Keynesians like Christina and David Romer are really just neoclassical types.For those of us who participated in the austerity debates, that’s pretty amazing and disheartening. Remember when Robert Lucas accused Christy Romer of corruptly producing ‘schlock economics to justify government spending?’

Now, mind you, I am not about to criticize Susan Sarandon as my post was not about politics. Rather – I’m disappointed in the latest from J.W. Mason:

Now I don’t think we want to get caught up in the specific strengths or weaknesses of that paper or the plausibility of particular numbers. I think that there are some problems with the paper. If you were to do the same exercise more carefully you would probably come up with lower numbers.... Is there good reason to think that a big expansion of public spending could substantially boost GDP and employment?... The position on the other side, the CEA chairs and various other people who’ve been the most vocal critics of these estimates, has been implicitly or explicitly: ‘This is as good as we can do.’ We’re not talking about core macroeconomic policy issues because they’re not a problem right now that we have 5 percent unemployment, which is full employment. The economy is at potential, more or less. There isn’t any aggregate demand problem to solve.

There were serious problems with the original paper, but I am glad they are admitting the original assessment was on the high side. But we critics do admit we are below full employment and we have been calling for fiscal stimulus. On this score, the latest from J.W. Mason is even more dishonest than the latest from Gerald Friedman. Guys--you do not win a debate by lying about the other side’s position.

A Methodological-Moral Struggle Over the Sanders Economic-Policy Proposals

Paul Krugman weighs in, with another point for model-building as an intuition pump rather than as a filing system--if the model doesn't produce the results you want and think belong in your filing system, you should worry rather than simply throwing it out and getting another model. Plus a bunch of other issues--empirical, methodological, political, and--alas!--moral. Read MOAR