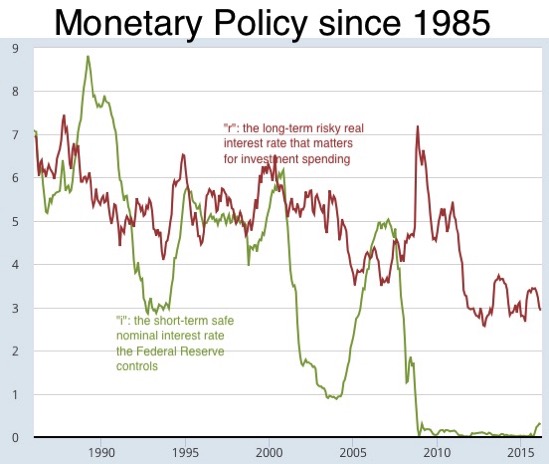 The Federal Reserve overshoots and overtightens. But the effect on the economy is diminished because more-responsible fiscal policy leads to a fall in the term and risk premiums: 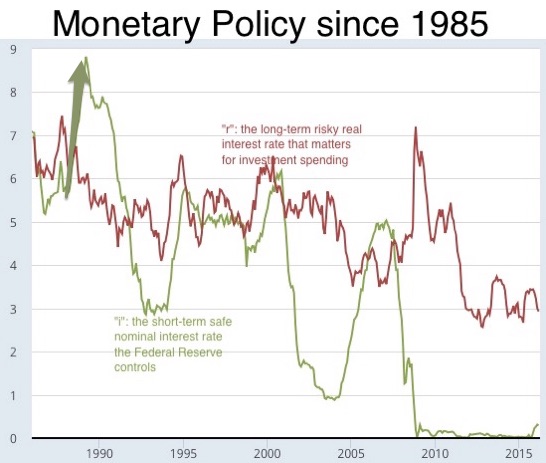 The Federal Reserve eases monetary policy to fight the recession and jobless recovery caused by its previous overshoot: 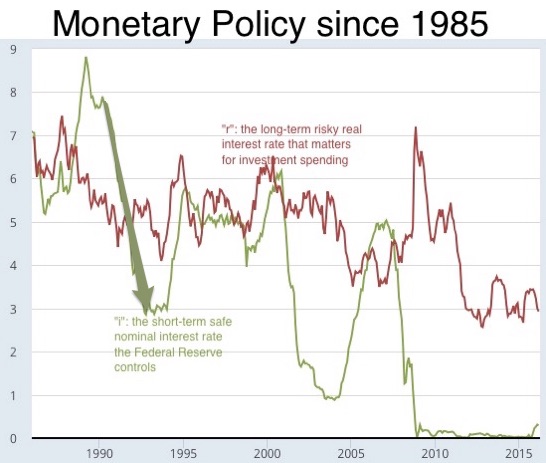 The Federal Reserve tightens to--successfully--try to keep inflation from rising; the first bond market "conundrum" as the endogenous duration of mortgage-backed securities produces a much tighter-than-expected gearing between the short-term safe nominal interest rate i and the long-term risky real interest rate r: 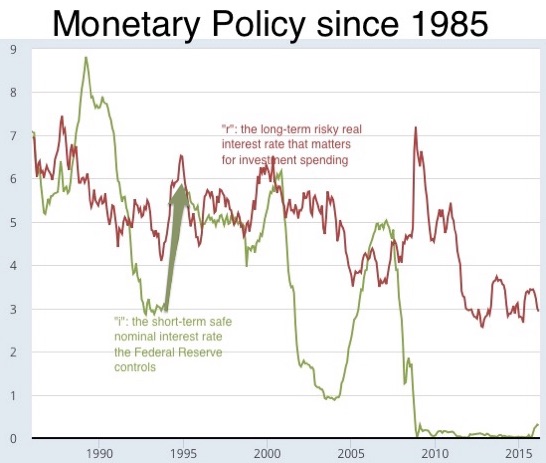 The Federal Reserve loosens during the international financial crisis of 1998: 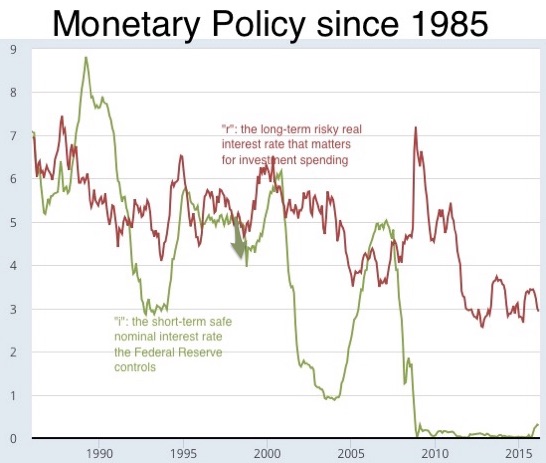 The Federal Reserve tightens to try to prevent "overheating" in the late stages of the dot-com boom: 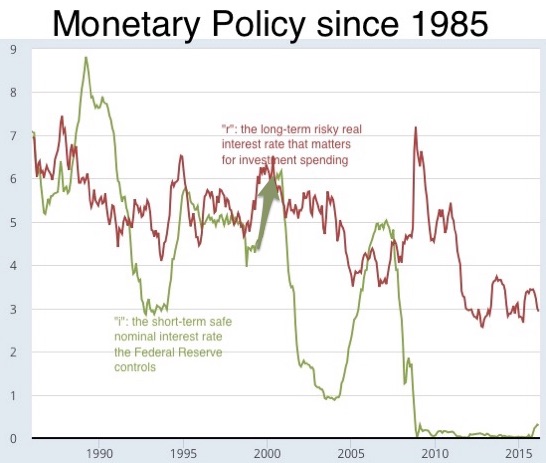 The Federal Reserve loosens to fight the recession brought on by the collapse of the dot-com boom: 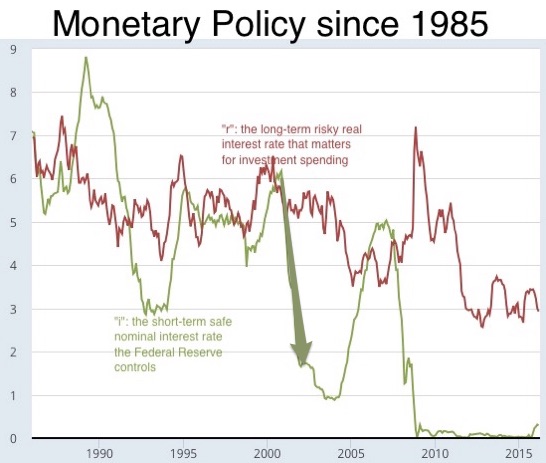 The Federal Reserve keeps policy stimulative and delays its interest-rate tightening cycle given the weakness of the recovery; the bond market first does not and then does credit the Federal Reserve's statements: 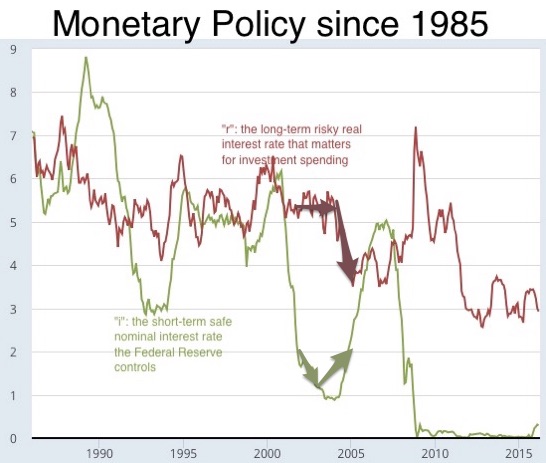 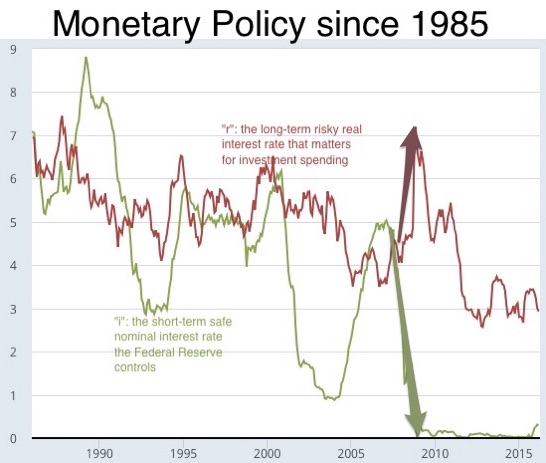 With the recovery inadequate, the Federal Reserve decides to extend the period of emergency stimulative extraordinary monetary policy--but the long-term risky real interest rate r sticks at 3%, and does not go any lower: 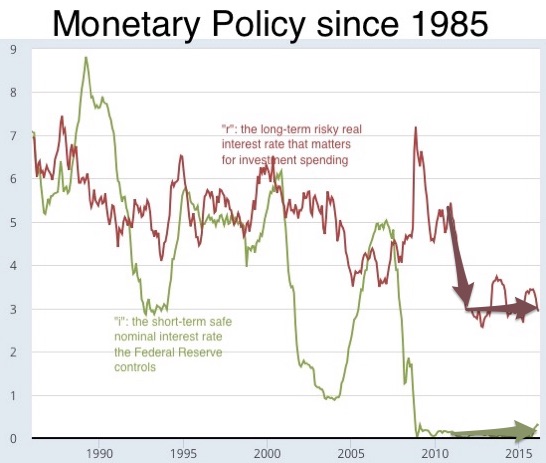 With the unemployment rate now in the range associated with full employment, the Federal Reserve decides that it is time to "normalize" interest rates: 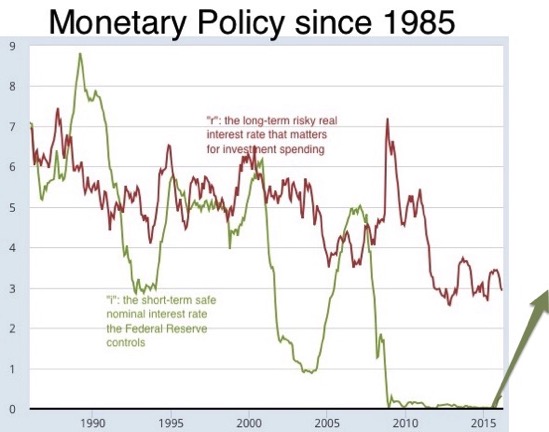 The Federal Reserve has overdone it on inflation control--successfully kept inflation from getting "too high", and in fact pushed inflation "too low": 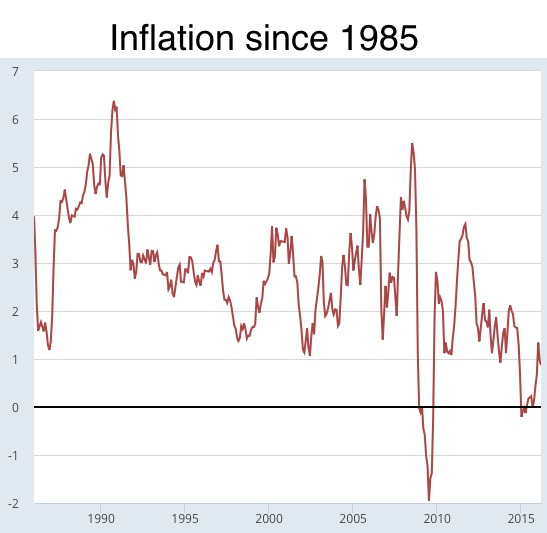 Before 2008, macroeconomic stabilization performance on full employment was quite good. 2008-2010 was a disaster. How we evaluate what follows depends on whether we look at unemployment or employment: 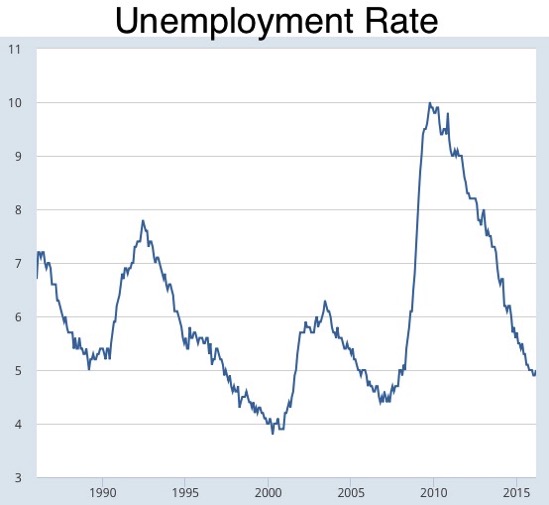 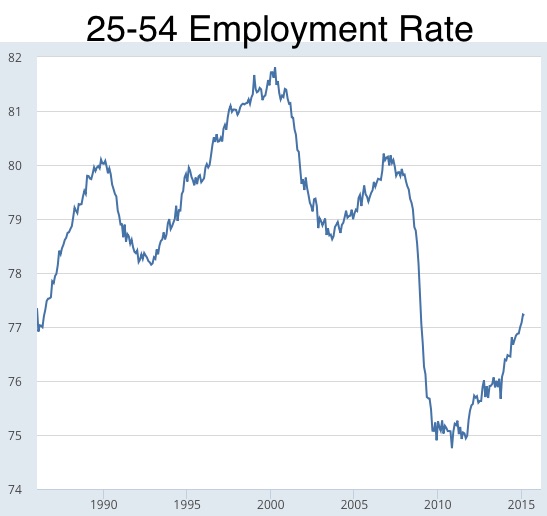 Was a recession in 2009 any sense "needed" to move people out of construction employment as the housing boom collapsed? Was a rise in unemployment a necessary first step in rebalancing the late-2000s economy?

No: Look at the key components of aggregate demand: 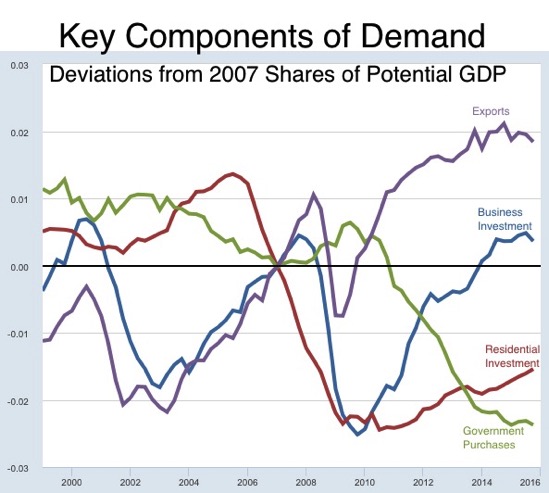 As of November 2008, when John Cochrane gave his "we should have a recession... people who spend their lives pounding nails in Nevada need something else to do..." keynote address to the 2008 CRSP Forum, residential investment had already fallen by 3.5%-points of GDP and was within 0.5%-points of what had been its nadir. The recession came after* the move of labor out of construction had been all but completely finished:* 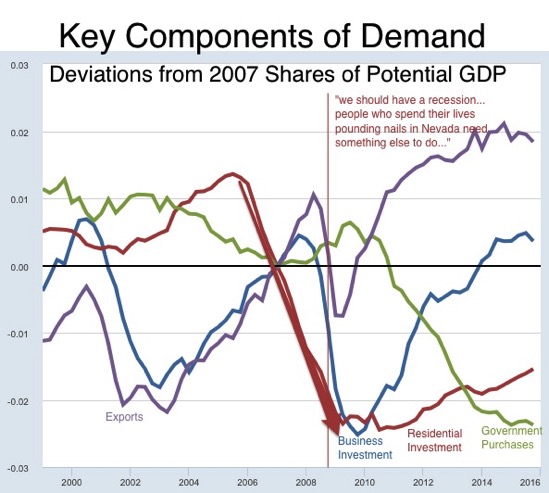 *If you were going to say "we should have a recession" on the grounds that a recession was a necessary part of the structural adjustment required to climb down from overinvetment in housing, the moment to have said that was 2005. And those who said that then were wrong: we did not read a recession in order to move those "pounding nails in Nevada" into other sectors while keeping them employed...

The Federal Reserve overshoots and overtightens. But the effect on the economy is diminished because more-responsible fiscal policy leads to a fall in the term and risk premiums: