Hoisted from the Archives from Two Years Ago: The Poverty of Right-Wing Piketty Criticism 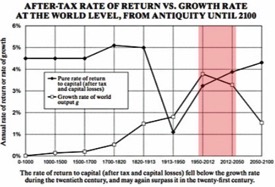 Over at Project Syndicate: The Poverty of Right-Wing Piketty Criticism: In The Baffler, Kathleen Geier recently attempted a roundup of conservative criticism of Thomas Piketty’s new book Capital in the Twenty-First Century. The astonishing thing to me is how weak the right’s appraisal of Piketty’s arguments has turned out to be.

Now, even in thumbnail form, this is a complicated argument. As a result, one would expect that it would attract a large volume of substantive criticism. And, indeed, Matt Rognlie has attacked (4), arguing that the return on wealth varies inversely with the wealth-to-annual-income ratio so strongly that, paradoxically, the more wealth the rich have, the lower their share of total income. Thus, their economic, political, and sociocultural influence is weaker as well.

Tyler Cowen of George Mason University, echoing Friedrich von Hayek, has argued against (4) and (5). The “idle rich,” according to Cowen, are a valuable cultural resource precisely because they form a leisured aristocracy. It is only because they are not bound to the karmic wheel of earning, getting, and spending on necessities and conveniences that they can take the long and/or heterodox view of things and fund, say, the creation of great art.

Still others have waved their hands and hoped for a new industrial revolution that will create more low-hanging fruit and be accompanied by another wave of creative destruction. Should that happen, more upward mobility will be possible, thus negating (2) and (3).

But the extraordinary thing about the conservative criticism of Piketty’s book is how little of it has developed any of these arguments, and how much of it has been devoted to a furious denunciation of its author’s analytical abilities, motivation, and even nationality.

Clive Crook, for example, argues that:

the limits of the data [Piketty] presents and the grandiosity of the conclusions he draws...borders on schizophrenia

rendering conclusions that are:

either unsupported or contradicted by [his] own data and analysis...

And it is “Piketty’s terror at rising inequality,” Crook speculates, that has led him astray.

Meanwhile, James Pethokoukis thinks that Piketty’s work can be reduced to a tweet:

And then there is Allan Meltzer’s accusation of excessive Frenchness. Piketty, you see, worked alongside his fellow Frenchman Emmanuel Saez:

at MIT, where... the [International Monetary Fund’s] Olivier Blanchard, was a professor.... He is also French. France has, for many years, implemented destructive policies of income redistribution...

Combining these strands of conservative criticism, the real problem with Piketty’s book becomes clear: its author is a mentally unstable foreign communist. This is an old tactic on the US right, one that destroyed thousands of lives and careers during the McCarthy era. But the depiction of ideas as being somehow “un-American” has always been an epithet, not an argument.

Now, in the center-left American communities where I live and work, Piketty’s book has been received with praise bordering on reverence. We are impressed with the amount of work that he and his colleagues have put into collecting, assembling, and cleaning the data; the intelligence and skill with which he has constructed and presented his arguments; and how much blood Arthur Goldhammer sweated over the translation.

To be sure, everyone disagrees with 10-20% of Piketty’s argument, and everyone is unsure about perhaps another 10-20%. But, in both cases, everyone has a different 10-20%. In other words, there is majority agreement that each piece of the book is roughly correct, which means that there is near-consensus that the overall argument of the book is, broadly, right.

Unless Piketty’s right-wing critics step up their game and actually make some valid points, that will be the default judgment on Piketty’s book. Red-baiting or French-bashing is unlikely to help.

Hoisted from the Archives from Two Years Ago: The Poverty of Right-Wing Piketty Criticism

Over at Project Syndicate: The Poverty of Right-Wing Piketty Criticism: In The Baffler, Kathleen Geier recently attempted a roundup of conservative criticism of Thomas Piketty’s new book Capital in the Twenty-First Century. The astonishing thing to me is how weak the right’s appraisal of Piketty’s arguments has turned out to be.