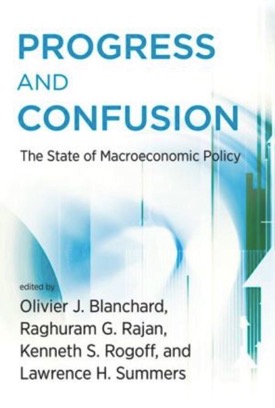 Olivier Blanchard, C. Fred Bergsten Senior Fellow at PIIE, reflects on the state of macroeconomic thinking in the last chapter of a book published by MIT Press that he coedited, entitled Progress and Confusion, The State of Macroeconomic Policy. In particular, the book addresses the profession's self-reassessment following a historic financial crisis that was largely missed by prevailing macroeconomic models:

We are indeed proceeding in the trenches. But where the trenches will eventually lead remains unclear...

My subtitle was rejected by one of the co-organizers, Larry Summers. He argued that I was far too optimistic, that we were nowhere close to knowing where were going. Arguing with Larry is tough, so I chose an agnostic title and shifted to “Rethinking Macro Policy III: Progress or Confusion?”

Where do I think we are today? I think both Larry and I are right. I do not say this for diplomatic reasons. We are indeed proceeding in the trenches. But where the trenches will eventually lead remains unclear. This is the theme I shall develop in these concluding remarks, focusing on mac- roprudential tools, monetary policy, and fiscal policy.

Let me start with macroprudential tools. If anything, the crisis has convinced most of us that they have to be part of the basic macro toolkit. And much progress has been made, both in terms of research and in terms of policy. Measures of systemic risk are being developed, with an eye on implied instruments. A recent survey by the US Office of Financial Research identified thirty-one methods to identify particular dimensions of systemic risk, and there are no doubt many more. Most countries have put in place macroprudential authorities, sometimes at the central bank, such as in the UK, sometimes outside with central bank participation, such as in the United States. More and more countries are experimenting with loan-to-value ratios and other tools to affect housing demand and prices. But where are these trenches going? We do not know the shape of the future financial system, for example the degree to which it will be institution- or bank-based or market-based. Of course, the same uncertainty applies to, say, the high-tech sector, and we do not worry; we just observe, and we will see where it goes. But finance is different. Policymakers cannot be simple observers, as what the financial system will be depends very much on regulation. And we do not have a good sense of what regulation should be.

Take, for example, capital ratios. In principle, variable capital ratios (macroprudential) sound better than fixed ones (financial regulation). But is the trade-off really that clear? The difficulty of identifying when and how to move the ratios, and the political economy complications associated with such changes, make the answer far from obvious.

The preliminary conclusions from a study by an IMF team that looked at banking crises since 1970 in advanced economies are that a capital ratio of 15 to 22 percent (a bit higher than what is coming out of Basel III) would have been sufficient to fully absorb losses in 90 percent of them. Maybe a constant 15 percent is better than a ratio that varies between, say, 10 percent and 30 percent.

Very much the same set of issues arises with respect to cross-border flows. Much work is going on revisiting the effects of the various types of capital flows, and the efficacy of various forms of capital controls and foreign exchange intervention. As we heard from the speakers in the session on capital flows, there is fairly wide agreement that capital flows can be disruptive, and that it may make sense to use foreign exchange intervention and capital controls. But again, the ultimate question, namely, the degree of openness of the capital account, remains unanswered. Should some flows be permanently banned, if that were indeed possible? We do not know.

Let me turn to monetary policy. Central banks have experimented with and researchers have explored monetary policy, often in that order. We have learned a lot, namely, that the zero lower bound can be reached and is hard to get away from, that financial assets are truly imperfect substitutes, that quantitative easing can affect the term premium, and that bank runs happen to nonbanks as well. In the trenches, a lot has been done and is being done. But again, it is not clear where the trenches will lead. Take two related issues—the size and the composition of central bank balance sheets. (I will leave out one of my favorite issues, such as how to avoid the zero lower bound in the future, and the optimal rate of inflation. Not much progress has been made here, but I don’t think the issue has gone away. I will also leave aside the central issue of coordination of monetary and macroprudential tools.)

For the moment, the issue is largely moot. The required direction of movement is clear, and it will take a long time for the balance sheet to adjust to whatever it should be. But should it go back to its precrisis size, or perhaps even smaller, given the steadily decreasing demand for currency for transaction purposes? Or should it remain larger, with interest paid on the excess reserves that banks would have to hold? I see no argument for a large central bank balance sheet, but the discussion has not yet taken place.

Should the Fed return to intervening only at the short end of the yield curve, or are there good reasons for continuing to intervene along the curve? Put another way, what are the advantages of affecting both the short rate and the term premium on longer-maturity bonds? How solid is the argument that, to the extent that the Fed holds T-bills, it is depriving the private sector of precious collateral? I do not know the answer to those questions, yet they are central to where we want to go in the end. Fiscal Policy

Let me move to a brief discussion of the third pillar, fiscal policy. We have learned many things. Fiscal stimulus can help. Public debt can increase very quickly when the economy tanks, but even more so when contingent—explicit or implicit—liabilities become actual liabilities. The effects of fiscal consolidation have led to a flurry of research on multipliers, on whether and when the direct effects of fiscal consolidation can be partly offset by confidence effects, through decreasing worries about debt sustainability. (There has been surprisingly little work or action where I was hoping to see it, namely, on a better design of automatic stabilizers. It is explored in this spring’s Fiscal Monitor [IMF 2015, but so far there have been no actual policy changes.)

Admittedly, navigation by sight may be fine for the time being. The issue of what debt ratio to aim for in the long run is not of the essence when there is a large consensus that it is too large today and the adjustment will be slow in any case—although even here, Brad DeLong has provocatively argued that current debt ratios are perhaps too low. (I shall not embark on the debate over secular stagnation and whether we can act under the assumption that r will be less than g for the indefinite future.)

But how to assess what the right goal is for each country? This remains to be done. It has become clear that there is no magic debt-to-GDP number. Depending on the distribution of future growth rates and interest rates, on the extent of implicit and explicit contingent liabilities, one country’s high debt may well be sustainable, while another’s low debt may not. Conceptually and analytically, the right tool is a stochastic debt sustainability analysis (something we already use at the IMF when designing programs). The task of translating this into simple, understandable goals remains to be done.

In short, though the trenches are being dug, we still do not have a good sense of where they will ultimately lead. We clearly need to have another conference in two years.

Olivier Blanchard, C. Fred Bergsten Senior Fellow at PIIE, reflects on the state of macroeconomic thinking in the last chapter of a book published by MIT Press that he coedited, entitled Progress and Confusion, The State of Macroeconomic Policy. In particular, the book addresses the profession's self-reassessment following a historic financial crisis that was largely missed by prevailing macroeconomic models:

We are indeed proceeding in the trenches. But where the trenches will eventually lead remains unclear...