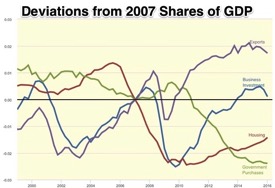 ...But they actually have relatively little to do with each other.... Coffee-house macro.... Finance macro.... Academic macro.... Fed macro.... Read MOAR Over at Equitable Growth

However, I think he has picked the wrong four.

Let's start with Noah's second: finance macro. It needs to be divided: One of its pieces--call that the second of our four components of macro--is grifter-finance macro: essentially affinity fraud to terrify rich people and get them to let you overcharge them to manage your money or simply to sell some snake oil you have to offer. I think it should come first:

The other piece of Noah's second--call that the useful finance-forecasting macro--is really the same thing as Fed-technocratic macro: the flow of ideas and people is large, and convergence not to a consensus model or approach but to a near-consensus distribution of models and approaches is relatively rapid. But let's postpone that.

Instead, turn to Noah's third, academic macro. It too needs to be divided: One of its pieces--DSGE macro--has indeed proven a degenerating research program and a catastrophic failure: thirty years of work have produced no tools for useful forecasting or policy analysis. As Noah puts it:

Academic macro has basically failed the other three.... Because academic macro is so useless for forecasting--including predicting the results of policy changes--the financial industry can’t use it for practical purposes. I’ve talked to dozens of people in finance about why they don’t use DSGE models, and some have indeed tried to use them--but they always dropped the models after poor performance.

The other piece of Noah's third is composed of that part of the academic community that is in dialogue with both finance-forecasting and Fed-technocratic macro. Noah says:

My view is that academic macro has basically failed the other three.... The Fed has had to go it alone when studying how the macroeconomy really works. Regional Fed banks and the Federal Reserve Board function as macroeconomic think tanks, hiring top-level researchers to do the grubby data work and broad thinking that academia has decided is beneath it. But that leaves many of the field’s brightest minds locked in the ivory tower, playing with their toys...

In fact, there is a dialogue between Fed-technocratic, finance-forecasting, and what we might call useful-academic. This dialogue is strong enough that they are pretty much the same thing: the flow of ideas and people is large, and convergence not to a consensus model or approach but to a near-consensus distribution of models and approaches is relatively rapid. Thus Noah's first three should be:

And then there is Noah's first, coffee-house macro:

Because academic macro models are so out of touch with reality, people in causal coffee-house discussions can’t refer to academic research to help make their points. Instead, they have to turn back to the old masters, who if vague and wordy were at least describing a world that had some passing resemblance to the economy we observe in our daily lives...

What this leaves out, I think, is that there is substantial idea-flow from coffee-house macro into useful Fed and forecasting macro. The useful macro community has spent the last decade realizing that there is a lot more to be learned from Keynes and Minsky than it had thought, and has been busily revising how and what it thinks under pressure of events. In some sense this was or ought to have been obvious. As Larry Summers said to me back in 1983: "There ought to be an awful lot of excellent careers to be made in macro by mathing-up more pieces of Keynes". (There is also, alas!, substantial idea-flow from coffee-house macro into grifter macro--Hayek, von Mises, etc.)

Thus if I were to write down a quadriad, I would modify Noah's into:

And I would add a fifth:

Policy macro is the intellectual framework that underpins the policies that the North Atlantic has followed since the start off 2010.

It is not in close dialogue with any of the others.

Justin Wolfers... a conference celebrating the career of MIT economist Olivier Blanchard.... Wolfers suggested abandoning DSGE models, saying that they ‘haven’t worked’... suggests that the new macroeconomics will focus on empirics and falsification... fertilized by other disciplines... will incorporate elements of behavioral economics....

I think the new macroeconomics... will redefine what ‘macroeconomics’ even means.... ‘Macro-focused micro’--studies of businesses, competition, markets and individual behavior that have relevance for macro... business dynamism, price adjustment, financial bubbles and differences between workers. Let’s hope more and more macroeconomists focus on these things, instead of trying to make big, grandiose, but ultimately vacuous models of booms and recessions. When we understand the pieces of the economy better, we’ll have a much better chance of grasping the whole...

...But they actually have relatively little to do with each other.... Coffee-house macro.... Finance macro.... Academic macro.... Fed macro.... Read MOAR Over at Equitable Growth