Ian Morris: Why the West Rules--for Now: The Patterns of History, and What They Reveal About the Future: The Economic History Research Frontier: A Great Recent Books Approach 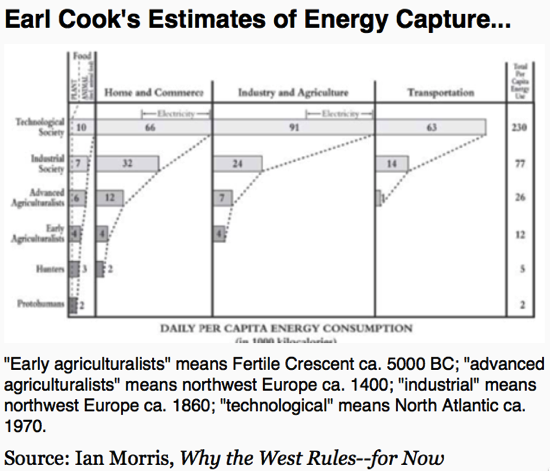 Ian Morris: Why the West Rules--for Now: The Patterns of History, and What They Reveal About the Future http://amzn.to/29AVKTj

Reading Ian Morris on the Wheat Lands and the Rice Lands

Suresh Naidu of Columbia told me to move Ian Morris's Why the West Rules--for Now to the top of The Pile--that it is a much, much better book than its title might suggest, and that Ian Morris knows lots of things that I do not. So I did, and I read it Saturday during downtime while watching a Berkeley Robotics Competition.

Suresh is correct: it is a very good book. And it is not about "why the west rules for now." it is, instead, Ian Morris's ecological materialist interpretation of global history, very well written, well argued, and well documented. I learned a lot from it.

The key features of Morris's theory are:

Humans have, Morris believes (and I agree), a common biology and also a common sociology: people whether they are East or West will think thoughts and arrange themselves in patterns that make sense to them given the ecological, material, and technological constraints and opportunities they see. What drives differences, Morris believes, is differences in geography.

The first way that geography is important is that it shapes the agrarian foundations on which post hunter gatherer human societies are built. A society needs to have the food to feed those people who are not farmers. In vista physiocrats are correct: the prosperity of an agrarian society is in extra complete tied to its agrarian surplus. No geographic, ecological, and technological possibility for an agrarian surplus, no possibility for a complex society with a high level of social development. A society may fail to achieve the order, repeats, and the production and distribution network to actually achieve and use that surplus. But without the possibility of an agrarian surplus it cannot even try.

Here, Western Eurasia gets its first edge over eastern Eurasia: the process of agricultural crop domestication begins three millennia earlier in the Fertile Crescent than in the Yellow River Valley. This three millennium headstart matters.

Moreover: Western Eurasia domesticates and focuses on wheat, while eastern Eurasia domesticates and focuses on rice (and millet). You can grow an awful lot of rice on an irrigated acre, and so produce an enormous agricultural surplus in that parcel of land that a knight or administrator on horseback come right across in a day. But you must do so with a relatively low labor productivity and a relatively high rural population: transplanting those rice seedlings requires many fingers. Hence rice societies tend to have high population density and low unskilled wage levels. Meet wheat societies, by contrast, can efficiently utilize much more capital-intensive methods of production based on clouds ploughs and animals and fertilizer. Lower total surplus per acre, probably, but higher marginal product of labor.

Over time technology and organization develop. Societies become more densely populated with more potential agricultural surplus, and they use that agricultural surplus to support other forms of production and distribution in more and more complicated and sophisticated ways. But, Morris claims, developing agrarian societies run into hard ceilings. Their modes of social organization come into conflict with the limited technological, organizational possibilities, and further development stops.

When you hit a hard ceiling your society then has little room for adjustment. The five horsemen of the apocalypse--famine, epidemic, migration, state failure, climate change--can then, if you are unlucky, bring on a major crash, as elites who had been cooperating fight fiercely over a smaller-than-expected resource pool and wreak additional destruction.

OK, so what do I think is wrong with it? Three things come to mind:

This course will provide students with an introduction to the research frontier in economic history by studying a carefully curated list of recent books in the field. We will undertake a critical reading of these books, focusing on both their strengths and weaknesses. General questions will include the following. Does the topic justify a book-length treatment? Does the author successfully sustain his/her argument throughout the book? What is the role of books, as opposed to articles, in research in economic history (and in economics more generally)? Supplementary readings are provided to point up this last question. Most sessions will be student led, in that students will take charge of presenting the author’s argument and stimulating classroom discussion.

Ian Morris: Why the West Rules--for Now: The Patterns of History, and What They Reveal About the Future: The Economic History Research Frontier: A Great Recent Books Approach

Ian Morris: Why the West Rules--for Now: The Patterns of History, and What They Reveal About the Future http://amzn.to/29AVKTj