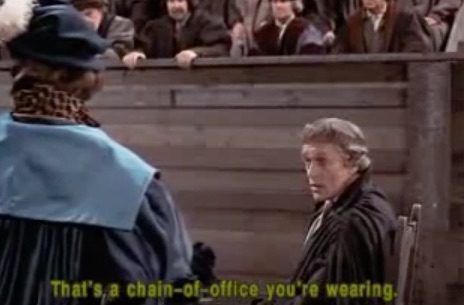 Live from the Republicans' Self-Made Gehenna: Zack Beauchamp finds a Republican validator--one of those who has spent most of the past decade stridently arguing that ObamaCare will make America a worse place and needs to be repealed-and-replaced--in the midst of what appears to be a nervous breakdown:

Zack Beauchamp: A Republican intellectual explains why the Republican Party is going to die:

Conservative intellectuals, and conservative politicians, have been in kind of a bubble... had this view that the voters were with us on conservatism--philosophical, economic conservatism. In reality, the gravitational center of the Republican Party is white nationalism....

None of us want to accept that opposition to civil rights is the legacy that we’ve inherited.... A lot of us on the right genuinely believed [that] wasn’t true... that conservatism... has been for some time much more about white identity politics than it has been about conservative political philosophy. I think today, even now, a lot of conservatives have not come to terms with that problem.”

This, Roy believes, is where the conservative intellectual class went astray. By refusing to admit the truth about their own party, they were powerless to stop the forces that led to Donald Trump’s rise. They told themselves, over and over again, that Goldwater’s victory was a triumph. But in reality, it created the conditions under which [a] Trump could thrive. Trump’s politics of aggrieved white nationalism--labeling black people criminals, Latinos rapists, and Muslims terrorists--succeeded because the party’s voting base was made up of the people who once opposed civil rights.... I ask Roy how he feels about all of this personally. His answer is very sad:

When Marco [Rubio] lost, I went through the five stages of grief. It was tough. I had to spend some time thinking about what to do for the next several years of my life. I left a comforting and rewarding career as a biotech investor to do this kind of work. I did it because I felt it was important, and I care about the country. Maybe it’s cheesy to say that, but I really sincerely do. So then, okay, what do I do? Do I do the same things I’ve been doing for the last four years? To me, just to do that to collect a paycheck didn’t make a lot of sense....

For the entire history of modern conservatism, its ideals have been wedded to and marred by white supremacism. That’s Roy’s own diagnosis, and I think it’s correct. As a result, we have literally no experience in America of a politically viable conservative movement unmoored from white supremacy. I’ve read dozens of conservative intellectuals writing compellingly about non-racist conservative ideals.... But not one... has been able to explain what actual political constituency could bring about this pure conservatism in practice.... Maybe Roy and company will be able to solve this problem. I hope they do. America needs a viable, intellectually serious right-of-center party. Because we now know what the alternative looks like. It’s Donald Trump.

I must confess I have somewhat less sympathy for Avik than Zack does.

If you had been reading Avik Roy over the past six years, you would have "learned" a lot of false things about how the implementation of ObamaCare was going, about what other countries' health care systems were like, about the functioning of Medicaid, and even about whether former Texas Governor Rick Perry was sane.

A lot of his writings seemed, to me at least, primarily intended not to educate Roy's audience but rather to be attempts by him to make his bones with his political masters--political masters like Marco Rubio who is currently endorsing Donald Trump for President.

For example, briefly searching the archives:

And I find myself reminded of Winston Churchill's late-1940 eulogy for Neville Chamberlain:

At the lychgate we may all pass our own conduct and our own judgments under a searching review. It is not given to human beings, happily for them, for otherwise life would be intolerable, to foresee or to predict to any large extent the unfolding course of events.

In one phase men seem to have been right, in another they seem to have been wrong. Then again, a few years later, when the perspective of time has lengthened, all stands in a different setting. There is a new proportion. There is another scale of values. History with its flickering lamp stumbles along the trail of the past, trying to reconstruct its scenes, to revive its echoes, and kindle with pale gleams the passion of former days.

What is the worth of all this? The only guide to a man is his conscience; the only shield to his memory is the rectitude and sincerity of his actions. It is very imprudent to walk through life without this shield, because we are so often mocked by the failure of our hopes and the upsetting of our calculations; but with this shield, however the Fates may play, we march always in the ranks of honour.

Whatever else history may or may not say about these terrible, tremendous years, we can be sure that Neville Chamberlain acted with perfect sincerity according to his lights and strove to the utmost of his capacity and authority, which were powerful, to save the world from the awful, devastating struggle in which we are now engaged….

Herr Hitler protests with frantic words and gestures that he has only desired peace. What do these ravings and outpourings count before the silence of Neville Chamberlain’s tomb? Long, hard, and hazardous years lie before us, but at least we enter upon them united and with clean hearts….

He was, like his father and his brother Austen before him, a famous Member of the House of Commons, and we here assembled this morning, members of all parties, without a single exception, feel that we do ourselves and our country honour in saluting the memory...

Live from the Republicans' Self-Made Gehenna: Zack Beauchamp finds a Republican validator--one of those who has spent most of the past decade stridently arguing that ObamaCare will make America a worse place and needs to be repealed-and-replaced--in the midst of what appears to be a nervous breakdown:

Zack Beauchamp: A Republican intellectual explains why the Republican Party is going to die: