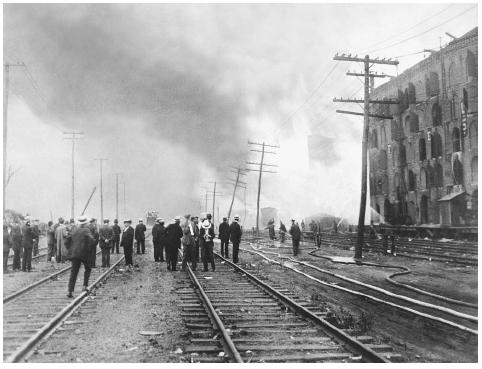 The Black Tom explosion was the peak act of German sabotage on American soil during the First World War. On July 29, 1916, German agents set fire to a complex of warehouses and ships in the New York harbor that held munitions, fuel, and explosives bound to aid the Allies in their fight. Though America was technically a neutral nation at the time of the attack, general policies greatly favored the Allies. The attack persuaded many that the United States should join the Allies and intervene in the war in Europe.

German intelligence and sabotage operations: As soon as war broke out in Europe, the United States began manufacturing munitions and sharing the weapons with allied British, French, and Russian forces in Europe. German agents in the United States reported the stockpiling and shipping of weapons, and the German government took action. Because they could only openly attack United States property in limited ways such as the sinking of merchant ships carrying contraband munitions without provoking America to wage war, the German government sent undercover agents to sabotage munitions operations. Numerous fires were set at military supply manufacturing sites. Shipping lines and railroads were also sometimes targets. Over 50 acts of sabotage were carried out on American targets from 1914 to 1918. Of those 50, nearly 30 occurred in the New York area alone. Not only did several factories and warehouses operate in the New York area, but ports in and around New York were the major staging point for shipping supplies to the western front in Europe.

Black Tom pier was located across the harbor from Ellis Island and the Statue of Liberty. The pier partially rested on Black Tom Island, from which it derived its name. The adjacent shore was crowded with warehouses, loading docks, and train tracks. While shipping had always flowed steadily from Black Tom, German agents noted an increase of activity from the site after the outbreak of war. Further investigations revealed that Black Tom was indeed connected to the war effort, and was the major shipping point for most of the fuel reserves bound for Europe. A munitions factory in Manhattan also shipped the detonator fuses it manufactured from Black Tom. A Pennsylvania company used the pier to load dynamite and other explosives onto transports. The combination of materials made Black Tom not only a dangerous place, but also a prime target for sabotage. Destruction of Black Tom would not only stall the shipment of supplies to Europe, but the volatile cargo would ignite and likely cause considerable property damage to the surrounding area.

Planning the attack at Black Tom: In 1914, shortly after the start of war in Europe, the German government sent a new ambassador to Washington. Count Johann Von Bernstorff brought with him a consular staff not of diplomats, but of trained German intelligence operatives. The staff also had an unusually high budget of 150 million dollars. The staff performed regular consular duties, but also led a network of other agents in the Unites States. They designated targets for sabotage... the fires scarred the pre-1920s American psyche. A certain hysteria began regarding the presence of spies and saboteurs on American soil. Rumors of German agents spreading germs, planting bombs, and kidnapping people were plentiful in the public imagination. Even though the threat posed by saboteurs on the public was propagandized to the extreme, the actions of saboteurs were limited in scope until 1916....

The Black Tom explosion: Months before his capture, von Rintelen established a team of agents that would be responsible for the destruction of Black Tom Pier. He hired several agents to perform various tasks from smuggling the charges onto ships to bribing pier workers. It remains unknown who actually lit the first explosive fuse to cause the explosion at Black Tom. Police investigations pointed to a man named Michael Kristoff who was living at a boarding house in Bayonne, New Jersey, and was reported by his land lady to keep odd hours and often return home smelling of fuel or having small soot stains on his hands or clothing. Kristoff, when later questioned by authorities mentioned several other accomplices, but did not specifically mention their various roles in the sabotage.

The exact events of the night of the Black Tom explosion largely remain a mystery. Several night watchmen guarded the area around the pier, but two were later discovered to have accepted bribes from German agents to loosen their guard. The cargo itself was largely unprotected, and sat loaded on moored barges and hips in the harbor. An ammunition storage facility and several fuel tanks were located on the adjacent shore. The first fire and explosion most likely began in this area. Guards fled the scene, wary of the materials they knew were in the vicinity. At 2:08 a.m., a thunderous explosion shook the New Jersey harbor, shattered windows, and threw people from their beds across the bay in Manhattan. That explosion began aboard the Johnson 17, a ship carrying explosives and fuel that was docked near the pier. Several other explosions were heard shortly after, and continued until dawn. Shrapnel rained down on New York City and the New Jersey harbor area. Immigrants awaiting entry processing on Ellis Island were evacuated from their barracks, and the Statue of Liberty sustained damage from flying debris. When all of the fuel and explosives were spent, the smoke cleared to reveal a swath of devastation several city blocks wide. Black Tom pier and most of its island were gone.

Investigation following the war: Following the war, a special commission convened to assess damages from various incidences of terrorism in the United States. The Mixed Claims Commission consisted of a German, an American, and a neutral representative. The commission reviewed the claims of industries, companies, and governments that lost property to the work of saboteurs during the war. The Black Tom explosion was the largest of such claims. After reviewing evidence supplied by police and intelligence investigations, the panel decided that the explosion was the result of foul play on the part of German terrorists. The commission awarded a settlement amount of 50 million dollars, the largest damage claim awarded for a single incident during the war. The money was to be paid from German reparations payments proscribed in the Treaty of Versailles. The damage award to the plaintiffs, however, was not finally made until 1939.

The Black Tom explosion was the peak act of German sabotage on American soil during the First World War. On July 29, 1916, German agents set fire to a complex of warehouses and ships in the New York harbor that held munitions, fuel, and explosives bound to aid the Allies in their fight. Though America was technically a neutral nation at the time of the attack, general policies greatly favored the Allies. The attack persuaded many that the United States should join the Allies and intervene in the war in Europe.