Is the Semi-Permanent "Gunpowder Empire" Historical Scenario Plausible? Perhaps Not... 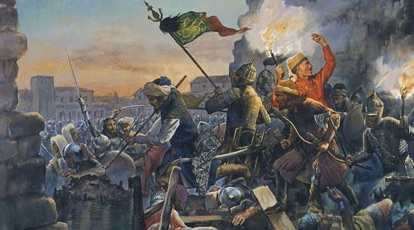 Michael Kremer then developed this association between higher global population levels and faster population (and global real GDP, and global total factor productivity) growth into a "two heads are better than one" theory of long-run economic growth:

No matter where the economy starts, it winds up in region B.... Once the trajectory is in region B, it remains there, with population and income both increasing indefinitely. Income must eventually reach y*, the [demographic transition] level above which population growth slows.... As income rises above y*, population growth rates decline. If Φ = 1, so that the level of technology enters the research production function linearly, growth rates of technology continue to increase because population continues to increase.

If 1 > Φ... growth rates of technology are likely to continue to increase for some period.... In summary, if population adjusts to income at finite speed... income will gradually rise over time... there will eventually be a demographic transition... [followed by] steady state growth rates of population, technology, and income...

In Kremer's model, population will grow and eventually population will be high enough that research and development will proceed fast enough to push income per capita high enough to trigger the demographic transition and thus break the Malthusian proportional link between resources and technology on the one hand and population on the other. After that link is broken, economic growth will predominantly take the form not of Malthusian increases in population but rather Industrial Revolution and Modern Economic Growth increases in living standards and labor productivity.

The breakthrough to an Industrial Revolution, Modern Economic Growth, and our present prosperous global post-industrial economy is therefore baked into the cake. It is an all-but-inevitable event in human history produced by the simple fact that when it comes to generating useful ideas two heads are better than one: "the fundamental nonrivalry of technology as described by Paul Romer (1986)..."

The alternative view to the inevitability of the breakthrough is that the breakthrough to the Industrial Revolution and the subsequent knock-on transition to Modern Economic Growth was a lucky throw of the historical dice--that while Kremer's model has something like our economic world today as our inevitable destiny, the world might well be substantially otherwise and remain substantially otherwise for millennia if not longer. The current poster child for British-Industrial-Revolution-a-lucky accident is Robert Allen, and his excellent "The British Industrial Revolution in Global Perspective":

It was not Newtonian science that inclined British inventors and entrepreneurs to seek machines that raised labour productivity but the rising cost of labour... due to... Britain’s success in the global economy... in part the result of state policy... [and] Britain['s] vast and readily worked coal deposits.... The necessary R&D was profitable in Britain (under British conditions) but unprofitable elsewhere....

The theory advanced here explains the technological breakthroughs of the industrial revolution in terms of the economic base of society–natural resources, international trade, profit opportunities. Through their impact on wages and prices, these prime movers affected both the demand for technology and its supply...

Why did the industrial revolution lead to modern economic growth?... Wouldn’t the French, or the Germans, or the Italians, have produced an industrial revolution by another route? Weren’t there alternative paths to the twentieth century?... The nineteenth century engineering industry was a spin-off of the coal industry.... The British inventions of the eighteenth century–cheap iron and the steam engine, in particular–were so transformative... because of the possibilities they created for the further development of technology. Technologies invented in France–in paper production, glass, knitting–did not lead to general mechanization or globalization....

There is no reason to believe that French technology would have led to the engineering industry, the general mechanization of industrial processes, the railway, the steam ship, or the global economy. In other words, there was only one route to the twentieth century–and it went through northern Britain...

Kremer's (1993) model then allows us to ask the question: How long would it have taken--in the absence of eighteenth century Britain--to get the ball rolling.

So let us start with Michael Kremer's pre-1800 data on world population--levels and growth rates. First, feed this data to R, and plot it: 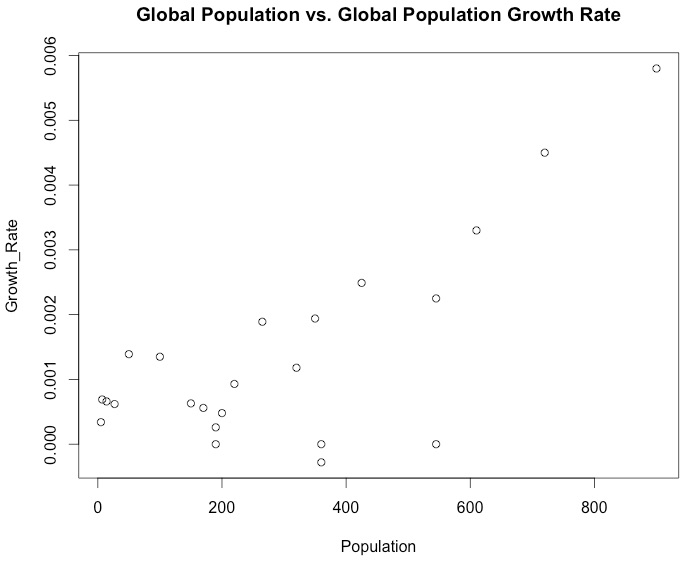 We want to assume that if there are no people to invent things, technology does not improve--that the growth rate of technology and thus of population is zero when the population is zero. Other than that, we want to be relatively agnostic as to what the functional form of this relationship is. So let us look at first- through fifth-degree polynomial fits of the growth rate to population: 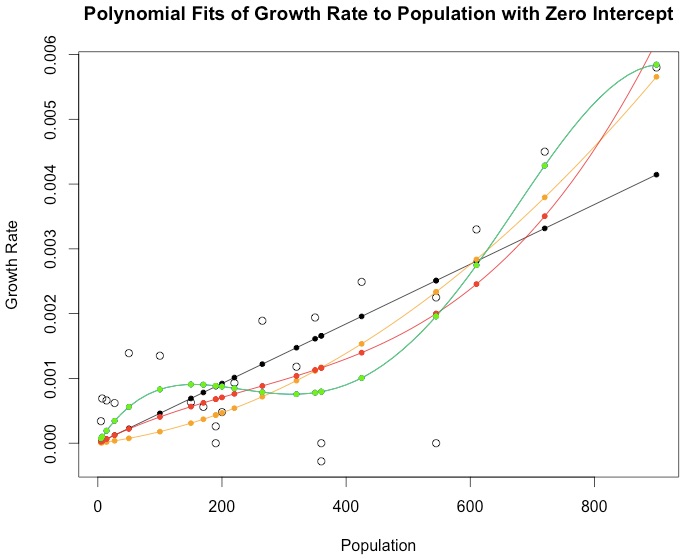 The computer is moderately happy with the first-order linear fit:

With the third-, fourth-, and fifth-degree polynomials the computer keeps trying to find some polynomial that will make sense of the slow growth of the High Middle Ages with their Black Death and Mongol invasions, the 1600-1650 Little Ice Age pause, and the post-1750 speed-up as more than random chance, and the fitted line starts to wiggle like a snake without noticeable improvements in fit: the simple R^2 goes from a linear 0.7513 and a quadratic 0.8084 to 0.8219, 0.8453, 0.8453 for the third-, fourth-, and fifth-order polynomials, respectively. I would not bet on the out-of-sample performance of those at any odds, with the third-order showing faster growth acceleration than the quadratic off the right edge of the graph, and the fourth- and fifth-orders predicting a nose dive in growth off the right edge.

So let's take the first-order zero-intercept polynomial as our counterfactual no-Protestant Wind specification:

We also need assumptions about the relationship between population growth and material prosperity, and assumptions about when material prosperity would amount to a high enough value that the demographic transition would start to kick in. Let's make some up. Let's take our definition of "subsistence"--the level of GDP per capita in today's dollars at which the growth rate is 0--as $500/year. And let's say that a global income of $1000/year per capita is one at which population growth will reach its maximum of 2%/year, after which the demographic transition will kick in.

With those assumptions, we can then project Kremer's model starting as of 1750.

We get that in such a scenario the demographic transition would be beginning right now http://tinyurl.com/dl20160727c:

However, this scenario does not look like a permanent or a semi-permanent "Gunpowder Empire" world. This looks like a world that is 100 to 150 years behind our own in the transition to Modern Economic Growth. The aggregate patterns thus suggest that perhaps Bob Allen is wrong: the British Industrial Revolution and its hitting the sweet spot with its coal-steam-iron-machinery technological sweetspot saved humanity perhaps 150 years along its road, but not much more.

At least, that is the conclusion that you reach if you take the association between global populations and global economic growth back before the British Industrial Revolution seriously, as a causal relationship.

Now nobody is making you do this. You can argue that while two heads may be twice as good as one, a billion heads is not twice as good as 500 million, either for the reason of duplication of effort, for the reason that a human population in the billions produces large-scale resource degradation, or for both reasons. You can thus argue that the rate of technological innovation and population growth was about to asymptote--that a no-British Industrial Revolution scenario has global population and real GDP growth at roughly 0.5%/year for a long time, with improvements in technology barely keeping up with the halving of farm sizes every hundred and fifty years, as human population grows from 1 billion in 1850 to 2 billion in 2000 and 8 billion in 2300 being then barely fed by an economy only one-fifteenth as large as ours is today.

But to make such an argument you have to find some way of explaining away the very large scale population level-economic growth correlation that Michael Kremer highlighted--you have to find some way of accounting for it rather than as a very large scale indication that, where invention and innovation are concerned, two heads are better than one--twice as good, in fact.

Is the Semi-Permanent "Gunpowder Empire" Historical Scenario Plausible? Perhaps Not...