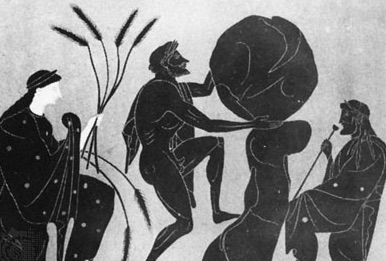 I understand that we are Sisyphus here. And I accept that:

But would people who ought to know better please stop adding weights to the stone that we are trying to roll uphill?

Thus I find myself quite annoyed by the sharp and usually-reliable Greg Ip this morning...

Let me back up: Here's the story so far:

(1) They say that North Atlantic governments cannot afford to spend more to boost their economies via expansionary fiscal policy right now. We point out that current interest rates on Treasury debt are so low low private company would pass up the ability to borrow to stimulate and invest.

(2) They then say that maybe interest-rate will jump up a lot, soon, and thus make borrow to spend to stimulate and invest a bad deal. We point out that financial markets certainly do not expect any such thing. And we points out that, if you are truly worried about longer-run debt sustainability, the standard calculations tell us that debt- and amortization-to-GDP ratios will be lower with aggressive borrow and spend to stimulate and invest policies then with austerity.

(4) They then say: let's ignore those interest rates and pretend they are not telling us anything about the benefits and costs right now of fiscal expansion. We reply: you are economists--economists are supposed to take prices seriously, not throw the information in them away.

(5) They then say: nevertheless, running up the nominal debt through expansionary fiscal policy is somehow risky. We say: do helicopter money, which does not run up the debt.

(6) They then say: but even a half booming economy will take the pressure off of governments and bureaucrats to undertake urgent and important structural reforms. We ask: what evidence can you point to to support any claim that useful structural reform is easier in a low-pressure than in a high-pressure economy.

And we are met with silence.

And then they go back to parroting their talking point (1) again.

Greg Ip: Needed: A Contingency Plan for Secular Stagnation: "What if Larry Summers is right...

...[and there is] a chronic deficiency of investment relative to savings that has trapped the world in a state of low economic growth largely resistant to monetary policy[?] Events... have strengthened Mr. Summers’s case.... Formerly skeptical economists are less so: Both the International Monetary Fund and the Federal Reserve have implicitly warmed to Mr. Summers’s thesis. With yields taking another leg down after Britain’s vote to leave the European Union, the evidence of secular stagnation, Mr. Summers says, is stronger than ever. If he’s right, the world needs a contingency plan. The most direct response is more expansionary fiscal policy (i.e. lower taxes or higher spending), which would bolster demand and push interest rates up.

But policy makers are rightfully wary about acting in the face of so many contradictory signals. In the U.S., unemployment is moving lower and stocks are hitting new highs. Bonds could be pricing in secular stagnation, or merely a greater bias toward hyper-stimulative monetary policy by central banks...

Why are policy makers rightfully wary? All Ip says is:

Paolo Mauro of the Peterson Institute for International Economics notes that countries have often overestimated their long-term potential growth, resulting in too-high deficits and debts...

Um. No. The arithmetic tells us that at current interest rates fiscal expansion right now will not raise but lower the debt- and amortization-to-GDP ratios. Unless Mauro wants to take that on--which he does not--his piece is irrelevant for that reason alone. Moreover, Mauro seems to think that we have been overestimating long-term potential growth and correcting estimating long-term interest rates. That is wrong. We have been overestimating both long-term interest rates and long-term potential growth. If you overestimate both by the same amount, the biases induced in your estimates of the right current debt-to-GDP ratio are offsetting. The right level of the debt-to-GDP ratio is primarily a function of r-(n+g), the difference between the real interest rate r on Treasury debt and the real growth rate g of productivity plus the real growth rate n of the labor force. A reduction in r accompanied by an equal or smaller reduction in (n+g) is not a first-order reason to reduce government spending or the deficit right now. And that is what we have.

Here Larry Summers is right. Greg Ip is wrong. Larry has by now written a huge amount about his. Yet Ip counterposes his body of work to one working paper by Paulo Mauro that is, as best as I can see, irrelevant to secular stagnation arguments and concerns.

Why is it irrelevant? Mauro does correctly point out that lower future growth is a reason to slow the future growth of real government spending. But what Mauro does not point out is that such a fall in projected future growth is a reason to cut the level of spending now--or to avoid increases in the level of spending that would otherwise be good policy now--only if the slower expected growth is unaccompanied by an equal reduction in Treasury interest rates. Our reduction in expected future economic growth appears to have accompanied by a larger reduction in Treasury interest rates.

This opinions-of-shape-of-earth-differ-both-sides-have-a-point framing is... beneath what Greg ought to be writing. If he thinks Larry is wrong--or even that the anti-Larry case is arguable--he needs to find and quote real arguments that have real relevance here, and more than one of them, not a single piece from the Peterson Institute that is off-point.

I understand that we are Sisyphus here. And I accept that:

But would people who ought to know better please stop adding weights to the stone that we are trying to roll uphill?