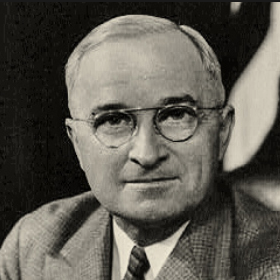 I had hoped for a letter today - but the mails are slow I guess. I signed about a hundred bills yesterday and more than that today. Vetoed some and have half dozen recommended for veto today on my desk now to read.

Everybody is elated over Mr. Slaughter's defeat. I am enclosing you an associated press dispatch on the Rules Committee quoting a Republican member. Of course the K.C. Star won't print it.

I'll bet the waste basket contains more editorials and columnists comments today than ever before in history. I am also enclosing you an editorial from the Washington Post. It is interesting to say the least. The N.Y. Herald-Tribune, N.Y. Times, Baltimore Sun, Washington News, N.Y. Wold [sic] Telegram and most all others had comments - mostly alibis for their wrong guesses.

Hannegan, of course is elated and Mr. Allen is about to float away. Time this week has Allen on the outside and an article - not so dirty as usual inside. Allen said he'd spent the whole time I was in Mo. trying to think up a proper reply for my press conference tomorrow - and this is what he suggested if Slaughter had won, "No comment - and I wish I'd said that two weeks ago too." Not bad, but I'm glad I don't have to use it.

Harry Hanes sent me a note in which he said "The slaughter in Kansas City should give all of us plenty of meat."

Puerto Rico is out. I have decided to leave here next Friday, Aug 16 and cruise up the east coast, through Long Island Sound, Nantucket Sound to Portsmouth, along the Maine coast and back here Sept 2. Will take the Military and Naval Aides, Ross, Graham, Clifford, Prettyman and the Naval man who does the Sergeant's job. We'll have no set schedule and the news goons will have to look after themselves.

Capt Foskett has persuaded the executive officer of the Augusta, who took us to Potsdam under Foskett's command to take charge of the Williamsburg for the deep sea cruise. I should be able to get some sleep and rest under those auspices.

It's cool here - hope it is there. Say hello to everybody in the family & kiss my sweet daughter.

I had hoped for a letter today - but the mails are slow I guess. I signed about a hundred bills yesterday and more than that today. Vetoed some and have half dozen recommended for veto today on my desk now to read.