Grasping Reality by Brad DeLong
Archives Highlighted Previous Edit COVID Market for Man Slavery 20th C. Reading 'Chicago'
No. There Is Not One Chance in Seven the 2018Q4 Fed Funds Rate Will Be 4.75% or Higher 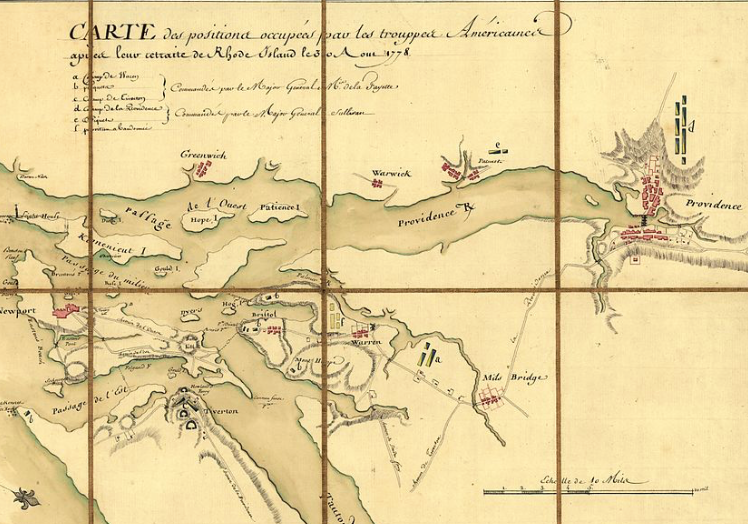 On the morning of August 28, the American war council decided to withdraw the last troops from their siege camps. Over the last few days, as some of their equipment was being withdrawn, the Americans had engaged the British with occasional rounds of cannon fire. General Pigot was also made aware of the American plans to withdraw on August 26 by deserters, so he was prepared to respond when they withdrew that night.

The American generals established a defensive line across the entire island just south of a valley that cut across the island, hoping to deny the British the high ground in the north.

The Americans organized their forces in two sections:

The British followed suit and organized their attack in a corresponding way, sending Hessian General Friedrich Wilhelm von Lossberg up the west road and Major General Francis Smith up the east road with two regiments each under orders to not make a general attack. As it turned out, this advance led to the main battle.

Smith’s advance stalled when it came under fire from troops commanded by Lt. Col. Henry Brockholst Livingston, who were stationed at a windmill near Quaker Hill. Pigot sent word to the commander of the British reserve, Major General Richard Prescott to dispatch the 54th Regiment and Brown’s Provincials to reinforce Smith. Thus reinforced, Smith returned to the attack, sending the 22nd and 43rd Regiments and the flank companies of the 38th and 54th Regiments against Livingston’s left flank. Livingston had also been reinforced with Col. Edward Wigglesworth’s regiment, sent by Sullivan, but was nevertheless driven back to Quaker Hill. Then, with a German regiment threatening to outflank Quaker Hill itself, Livingston and Wigglesworth abandoned the hill and retreated all the way to Glover’s lines. Smith made a probing attack but was repulsed by Glover’s troops. “Seeing the strength of the American position, Smith decided against launching a major assault”.[ This ended the fighting on the American left.

By 7:30 a.m., Lossberg had advanced against the American Light Corps under Col. John Laurens, who were positioned behind some stone walls south of the Redwood House. With the Hessian chasseurs, Huyne's Hessian regiment and Fanning's Provincial Regiment, Lossberg pushed Laurens' men back onto Turkey Hill. Despite Laurens being reinforced by a regiment sent by Sullivan, Lossberg stormed Turkey Hill and drove the defenders right back on Nathanael Greene's wing of the army before starting a cannonade of Greene's lines.

By 10 a.m., the sixth-rate HMS Sphynx, the converted merchantman HMS Vigilant and the row galley HMS Spitfire Galley had negotiated the passage between Rhode Island and Prudence Island and commenced a bombardment of Greene's troops on the American right flank. Lossberg now attacked Greene: German troops assailed Major Ward's Rhode Island Colored Regiment but were repulsed, bayoneting the American wounded as they fell back. Meanwhile, Greene’s artillery and the American battery at Bristol Neck concentrated their fire on the three British ships and drove them off.

At 2 p.m., Lossberg once again attacked Greene's positions without success. Greene counterattacked with Col. Israel Angell's 2nd Rhode Island Regiment, Brigadier General Solomon Lovell's brigade of Massachusetts militia and Henry Brockholst Livingston's troops. Failing in a frontal attack, Greene sent his 1,500 men forward to try to turn Lossberg's right flank. Heavily outnumbered, Lossberg withdrew to the summit of Turkey Hill. By 3 p.m., Greene's wing was holding a stone wall three hundred paces from the foot of Turkey Hill. Towards evening, an attempt was made to cut off the Hessians on Lossberg's left flank but Huyne's Hessians and Fanning's Provincials drove off Greene's men. This ended the battle, although some artillery fire went on through the night. Out of 260 British casualties, 128 were German.

Continental forces withdrew to Bristol and Tiverton on the night of August 30, leaving Aquidneck Island under British control. However, their withdrawal was orderly and unhurried. According to an account in the New Hampshire Gazette, it was accomplished "in perfect order and safety, not leaving behind the smallest article of provision, camp equipage, or military stores."

The inflammatory writings of General Sullivan reached Boston before the French fleet arrived; Admiral d'Estaing's initial reaction was reported to be a dignified silence. Under pressure from Washington and the Continental Congress, politicians worked to smooth over the incident, and d'Estaing was in good spirits when Lafayette arrived in Boston. D'Estaing even offered to march troops overland to support the Americans:

I offered to become a colonel of infantry, under the command of one who three years ago was a lawyer, and who certainly must have been an uncomfortable man for his clients.

On the morning of August 28, the American war council decided to withdraw the last troops from their siege camps. Over the last few days, as some of their equipment was being withdrawn, the Americans had engaged the British with occasional rounds of cannon fire. General Pigot was also made aware of the American plans to withdraw on August 26 by deserters, so he was prepared to respond when they withdrew that night.