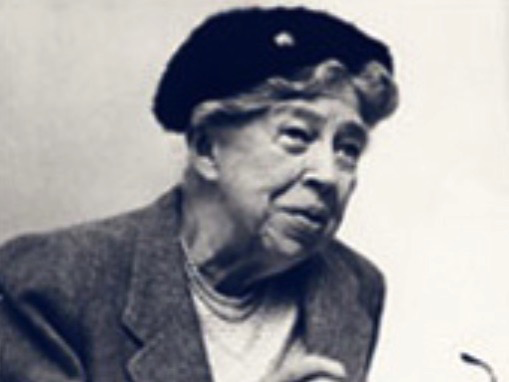 HYDE PARK, Tuesday—On the 7th of August four years ago, our marines landed on Guadalcanal. Some of the boys who made that historic landing have told me what those first few weeks were like. It was hard fighting, not only against the Japs but against disease and against propaganda from Japan which made them sometimes feel that they were an isolated dot in the Pacific.

We should never forget this first step in our march to victory. If we had not succeeded there, the whole history of the Pacific war might have been different. Resourcefulness and courage marked the conduct of the first men to land on Guadalcanal. They upheld the traditions of the American military services in the best possible way.

We in this country must never forget that Americans took Guadalcanal, Americans held it and went from there step by step to final victory over Japan. But when I visited the cemetery on Guadalcanal in 1943, I was reminded of the fact that the Americans who lay in that cemetery stemmed from many different races. And they worshipped God in many different ways. Some had come to this country fairly recently, some had ancestors who had lived here several hundred years, but it was the idea and the ideal of America which they all fought to preserve. We must never forget that our greatness depends upon our unity and that all of us, of whatever race or creed or color, are Americans.

Sunday afternoon, I drove into New York to see Miss Thompson. She is convalescing in her apartment and, since she has to be there another week, I was glad to find that she could be comfortable and cool in spite of the fact that, outside, it was certainly hot and muggy. It was good to see her and I had a very pleasant visit.

After lunch yesterday, I took the train back to Hyde Park, as I have a number of guests, including three children of various ages, staying with me for the next few days. The train was crowded and as I was a late comer, I found no seat in any coach, and so, in self-defense, I sat down in the diner-lounge to eat.

At the lounge end of the car, I soon found myself talking with a young Poughkeepsie man lately discharged from the Army. Soon, others joined in our conversation and I was much interested in the various opinions expressed.

One young air officer told us that, in a few weeks, he would be going back to Germany to work with our military government and that he was doing this as a measure of defense. He feels strongly that our brand of democracy must become known and understood in the rest of the world to help preserve the peace. And I gathered that the other young men felt the same way.

The only young man who had not fought in the war remarked that America could never be invaded to the extent that Russia had been, and I was interested to hear the soldiers say, "Don't say that—you never can tell what may happen." This struck me as a far healthier attitude than the sense of false security which takes it for granted that Americans are so invincible that no enemy can make any headway on their soil!

HYDE PARK, Tuesday—On the 7th of August four years ago, our marines landed on Guadalcanal. Some of the boys who made that historic landing have told me what those first few weeks were like. It was hard fighting, not only against the Japs but against disease and against propaganda from Japan which made them sometimes feel that they were an isolated dot in the Pacific.