Grasping Reality by Brad DeLong
Archives Highlighted Previous Edit COVID Market for Man Slavery 20th C. Reading 'Chicago'
No. There Is Not One Chance in Seven the 2018Q4 Fed Funds Rate Will Be 4.75% or Higher

Pyrrhus at Jackson Hole: A Monetary Policy "Victory" That Leaves the Central Bank in a Very Weak Position Blogging 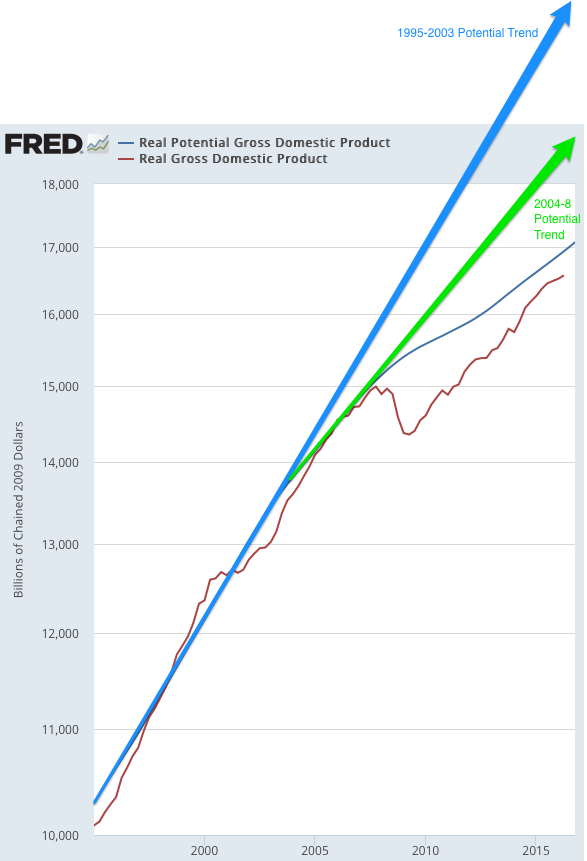 Over at Equitable Growth: Larry Summers says that he is disappointed along three dimensions at what came out of the Federal Reserve's Jackson Hole Conference. I think Summers is right to be disappointed. Indeed, from my perspective, it was disturbing that there was not more connection between the academic papers on how the monetary policy toolkit might be expanded and the policy discussion.

Summers's view is that the policy discussion is seriously awry: "near-term policy signals... on the tightening side... will end up hurting both the Fed’s credibility and the economy.... The longer-term discussion revealed... dangerous complacency about the... existing tool box.... [And] failure to seriously consider major changes in the current monetary policy framework..." I think that gets it right:

So if these issues were not, in my view, properly discussed at Jackson Hole, where should people go to learn about them?

First, Summers. This morning Summers argues about the near-term policy and economic outlook:

Larry Summers: Disappointed by What Came Out of Jackson Hole:

I had high hopes... billed as a forum that would look at new approaches to the conduct of monetary policy.... The Federal Reserve system and its Chair are to be applauded for welcoming challengers and critics... meet[ing] with the "Fed Up" group.... The fact that the Fed has now recognized that the decline in the neutral rate is something that is much more than a temporary reflection of the financial crisis is a very positive sign. On balance though, I am disappointed....

The near-term policy signals were on the tightening side which I think will end up hurting both the Fed’s credibility and the economy.... The Fed has not earned the right to be intellectually complacent or to expect that others will have faith in its current policy framework.... The Fed has been too serene about the economic outlook.... When the Fed predicted last December that it would raise rates four times in 2016, market participants saw a disconnect from reality. It has been that way for a long time.... 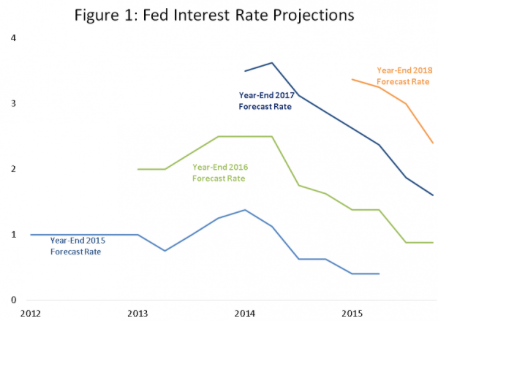 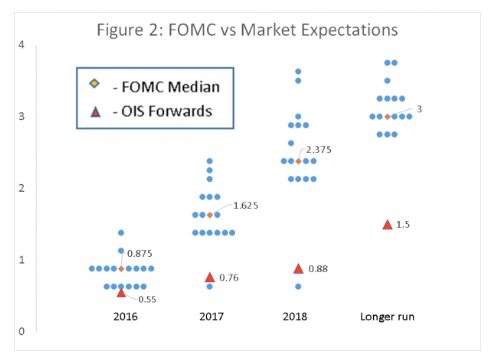 Chair Yellen... basically repeated the existing Fed position that rates would be raised at some point when the data were clear that the economy was strong and inflation reaching two percent. Markets took the remarks as mildly dovish until Vice Chair Fischer was seen on CNBC as interpreting the Chair as implying that two rates increases by the end of the year were possible.... I [had] hoped that the Fed would make clear that it would tighten only when there appeared a real risk of inflation expectations rising above two percent. At a time when market forecasts of inflation on Fed’s preferred price index are in the range of 1.2 percent, this is very likely some time off. Some are skeptical of market measures of inflation expectations. Note that survey measures of long term inflation expectations for both professionals and consumers are near historical lows and if anything have declined over the last year...

Second, people should go read Paul Krugman. Basically, since at least 1998 Paul has been way ahead of the curve on many issues, one of which is the return of "depression economics" and the need for abandoning the belief that stabilization policy can successfully be conducted by independent central banks with a narrow monetary policy operations toolkit:

The debate over monetary/fiscal policy is s-l-o-w-l-y reaching a point that was obvious quite a few years ago: https://t.co/TTle7xkNQ6

Paul is citing himself from four years ago:

One recurring complaint... is that [people] can’t figure out where I stand on monetary versus fiscal policy as a response to a deeply depressed economy.... Mike Woodford’s latest paper, especially taken in tandem with his paper last year at the Cambridge Keynes conference, actually explains it all.... Current monetary policy is indeed ineffective in a liquidity trap... there is still scope for central bank action in... credible commitments to keep monetary policy easy in the future.... The trouble is how to make those credible commitments... to convince the central bank itself that it’s a good idea... to convince the private sector that the central bank will not, in fact, just revert to type once the crisis is past. My judgment back in late 2008/early 2009 was that it would take a long time to get through those two stages....

What about fiscal policy? As Mike pointed out in his earlier paper, fiscal stimulus in a liquidity trap doesn’t require that you convince the market that you’re going to behave differently once the crisis is past. It doesn’t depend on expectations at all; the government just goes out and creates jobs. So it made a lot of sense to argue for stimulus as the main immediate response to the slump. But isn’t fiscal stimulus also a hard sell politically? Yes, indeed....

So what should well-meaning economists do now, with both fiscal and monetary policy falling short? The answer is, campaign on both fronts, trying to convince influential players both that austerity is wrong and that the Fed needs to start signaling its willingness to see more inflation before it raises rates. And that’s more or less where I am.

That was true back in the fall of 2012. And that is still true. The Federal Reserve can, if it wants declare victory by pretending that the economy is at full employment (it might be; but it probably is not) and that inflation is effectively at its 2%/year core PCE target (yes, Stan Fischer, we are looking at you: there is a very small chance that it might be; but the odds are overwhelmingly that it is not), but it cannot pretend that it has set up the game board properly for today's policymakers and their successors to deal with the next business cycle when it comes. For this, you need to read Jared Bernstein:

Jared Bernstein: Will the Federal Reserve Really Have What It Takes to Fight Off the Next Recession?:

No one knows when the next recession is going to hit... we just can’t accurately call these things.... There is, of course, a recession out there somewhere. The problem isn’t that we don’t know where; it’s that we’re not ready for it.... You simply cannot trust our Congress to act quickly and forcefully on countercyclical, discretionary fiscal policy (“discretionary” meaning the stuff aside from the automatic stabilizers).... The Federal Reserve... likely [has a] limited-firepower problem.... The federal funds rate (FFR)... is sitting at less than half-a-percent, which gives them very little room to cut....Reifschneider... argues that this concern may be overblown, at least under certain conditions. His reasoning is threefold:

I am not much comforted. There are a lot of “ifs” in Reifschneider’s story (all of which he is totally straight up about).... Sure, I hope Reifschneider’s optimistic scenarios are correct. But I fear they’re not and we’d be crazy not to have a Plan B.

Is the Fed really repeating its big mistake of the pre-crisis era, dismissing concerns about its ability to respond to recession? Jared Bernstein thinks so, and so do I.... The current state of thinking seems to be... Reifschneider, which argues... that by the time the next recession arrives, the Fed funds rate will have returned to a level that still leaves sufficient room to cut....

I can’t help but recall a 1999 paper by Reifschneider and John Williams about inflation targets and the risk of hitting the zero lower bound. They concluded that a 2 percent target should be enough to make this a minor concern... binding only 5 percent of the time, and ZLB episodes would last on average only 4 quarters.... We have just gone through an 8-year--32 quarter--ZLB episode, which accounts for more a quarter of the time that has passed since the beginning of the Great Moderation. Basically, that optimistic take was off by an order of magnitude. Shouldn’t that miss give the Fed pause now?

And you should also read Steve Matthews's report on the conference, with reports of some policymakers understanding how dire the situation is:

Yellen and three regional Fed bank presidents -- Robert Kaplan of Dallas, Eric Rosengren of Boston and Loretta Mester of Cleveland -- all urged fiscal policy makers to step up. “Central bankers, we are increasingly talking about this, about the need for fiscal policy and other economic tools beyond monetary policy,” Kaplan said during a luncheon Friday, although he cautioned it could be “many years” for there to be action.... “You can’t expect us to do the whole job,” Christopher Sims, Nobel Prize-winning economist from Princeton University, told Fed leaders on Friday. “So long as the legislature has no clue of its role in these problems, nothing is going to get done. Of course, convincing them that they have a role and there is something they should be doing, especially in the U.S., may be a major task”...

But they were not willing to call for institutional and policy reforms that will be needed in the highly-likely eventuality that fiscal policymakers do not recover their sanity:

Federal Reserve Chair Janet Yellen and her peers... re-affirmed their belief in power of monetary policy to stop economies from slipping into deflation. They were less keen on academic proposals that included the abolition of cash, raising their inflation targets, or keeping permanently large balance sheets.... Yellen, in her keynote address at the Kansas City Fed’s annual mountain retreat, said that additional tools remain “subjects for research” and were not being actively considered. Policy makers from Europe and Japan echoed her caution.... In stressing that monetary policy is adequate, Yellen and three other Fed officials at Jackson Hole urged structural reforms or a greater reliance on fiscal action...

Bank of Japan Governor Haruhiko Kuroda and Benoit Coeure, European Central Bank Executive Board member, both rejected the idea of a higher inflation target. Kuroda promised “ample space for additional easing” as needed, while Coeure said “we may need to dive deeper into our operational framework”...

Pyrrhus at Jackson Hole: A Monetary Policy "Victory" That Leaves the Central Bank in a Very Weak Position Blogging

Over at Equitable Growth: Larry Summers says that he is disappointed along three dimensions at what came out of the Federal Reserve's Jackson Hole Conference. I think Summers is right to be disappointed. Indeed, from my perspective, it was disturbing that there was not more connection between the academic papers on how the monetary policy toolkit might be expanded and the policy discussion.

Summers's view is that the policy discussion is seriously awry: "near-term policy signals... on the tightening side... will end up hurting both the Fed’s credibility and the economy.... The longer-term discussion revealed... dangerous complacency about the... existing tool box.... [And] failure to seriously consider major changes in the current monetary policy framework..." I think that gets it right: