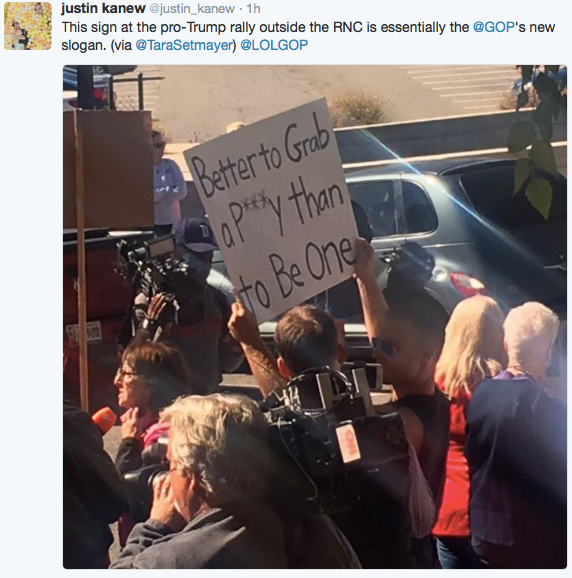 It is still too early to give you well-meaning advice to those Republicans who will seek to make their party less deplorable after November 2016. It is not, however, too early for us to think about what constructive advice we might give after November 2008.

It is definitely deplorable that, at the moment, the Republican Party's base is in substantial part a white and insular group of the relatively undereducated: fearful, misogynist, and racist; disliking Muslims and disliking Jews; feeling that they have something but that, rather then being a place of opportunity where the future is bright, America is a place of darkness, where somebody is going to try to take what they have away.

It took generations to shift the Republican base from its northern successful-striver cadre--those who thought that America was a place of opportunity where they had made something of themselves and were on the road to making a good deal more--that it was in the Eisenhower years to what it is today. It will take at generations for it to shift it back. It will be a long hard slog.

It needs to start immediately.

It needs to start immediately by abandoning the Nixon-Buchanan-Gingrich-Atwater-Aileen rhetoric of "we are going to break the country into two and hope we wind up with the larger half" for an Eisenhower-Reagan rhetoric of "every native born American and every immigrant is really a Republican at heart--some of them just don't know it yet". Politicians, advisors, and media professionals to push the first need to be blackballed at every possible opportunity. Politicians, advisors, and media professionals who push the second need to be promoted and boosted as rapidly as possible.

The message needs to be: If you are not a big tent Republican, you can vote for us, but you cannot be our candidate and you cannot have any influence on our platform or on our decisions about who to run for office. Small tent single issue people can join us at the end. But they cannot be in the core of the party.

This task will take generations. It will require constant and unsleeping vigilance. But it is essential for the long run.

And we must support the less-deplorable non-pussy-grabbing Republicans as they undertake this mission.

But in the meantime, before they can get a new and very different base, they have a task that may be even harder: that of controlling their current base and keeping it from nominating any more truly stupid candidates. Enough Trumps. Enough Plains. Even enough Quayles.

How are they supposed to do that?

I have a few scattered and probably ill-thought out ideas:

How many of these ideas are good ideas that the Republican Party should adopt before the next presidential election cycle comes around? Which of them should we, after November 8, advise the less-deplorable Republicans to adopt?

It is still too early to give you well-meaning advice to those Republicans who will seek to make their party less deplorable after November 2016. It is not, however, too early for us to think about what constructive advice we might give after November 2008.