What have those monetary policy choices been since the start of 2008? 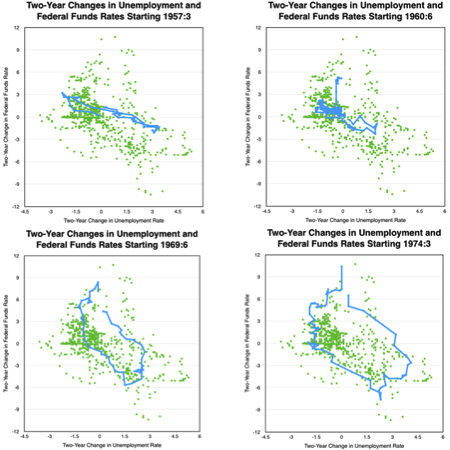 The first, the unemployment rate increases beginning in 1957:3 and 1960:6 are the “Eisenhower” cycles. In them the Federal Reserve started out in a relatively neutral posture: at the moment that the two-year change in the unemployment rate turned positive, the two year changes in the Federal Funds rate were only +1.28%-points and-1.03%-points, respectively. It then reduced short-term safe nominal interest rates by a relatively small amount—much less than the typical gearing of 1 to 2 that a Taylor Rule associates with the comovement of interest and unemployment rates.

William McChesney Martin had confidence in the equilibrium restoring self-stabilizing properties of his economy, and was inclined to lean only moderately against the wind. This confidence may have been a key factor that led him into what we now judge as his largest mistake: the missing monetary tightening and unemployed rate rise of 1966.

Then come the three “murder” cycles—after Rudiger Dornbusch (1998) and many other places: “the Federal Reserve Chairman… in time-honored fashion murder[s] the expansion before it gets a chance to die of old age…” In these, the Federal Reserve is not ahead of or at the curve in terms of lowering interest rates to provide support to a weakening economy. It is, rather, concentrating first and foremost on reducing inflation, and hence welcoming at least the initial stages of the unemployment rate rise as showing that its policies are successfully creating slack. When the two-year change in the unemployment rate turns positive in 1969:6, the Federal Funds rate stands 4.38%-points above its level two years earlier; in 1974:3, 6.47%-points above; and in 1979:9, 10.72%-points above. 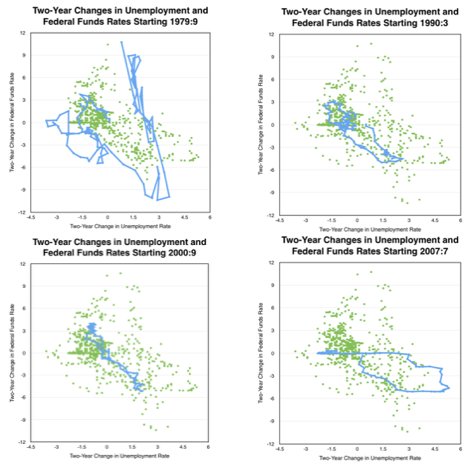 Last come the three “financial crisis” loosening cycles. As in the “Eisenhower” episodes, the Federal Reserve started in a neutral posture—it was not already engaged in a tightening episode when the unemployment rate starts to rise. In 1990:3 the Fed funds rate was -0.01%-points relative to its level of two years before; in 2000:9 it was at +0.50%-points; and in 2007:7 it was at -0.35%-points. That is when the economy hits the zero lower bound. That by itself creates a substantial difference between monetary policy in this episode and monetary policy in a typical post-Korean War cycle, and an even more substantial difference between the amount of monetary easing as measured by interest rate changes in this episode and that seen in the other two “financial crisis” episodes.

How much difference did the zero lower bound make in and since 2008?

What have those monetary policy choices been since the start of 2008?