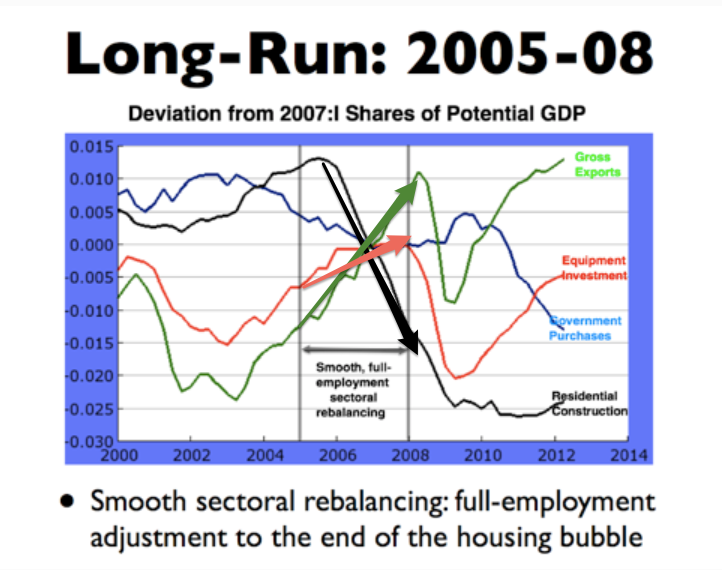 This, from the very sharp Martin Wolf, seems to me to go substantially awry when Martin writes the word "convincingly". Targeting inflation is not easy: you don't see what the effects of today's policies are on inflation until two years or more have passed. Targeting asset prices, by contrast, is very easy indeed: you buy and sell assets until their prices are what you want them to be.

As I have said before, as of that date January 28, 2004, at which Mallaby claims that Greenspan knew that he ought to "vaporise citizens’ savings by forcing down [housing] asset prices" but had "a reluctance to act forcefully", that was not Greenspan's thinking at all. Greenspan's thinking, in increasing order of importance, was:

(1) would not have kept Greenspan from acting had the other more important considerations weighed in the other direction: Greenspan was no coward. William McChesney Martin had laid down the marker that: "If the System should lose its independence in the process of fighting for sound money, that would indeed be a great feather in its cap and ultimately its success would be great..." Preserving your independence by preemptively sacrificing it when it needed to be exercised was not Greenspan's business. (2) was, I think, an error--but not a major one. And on (3), Greenspan was not wrong: 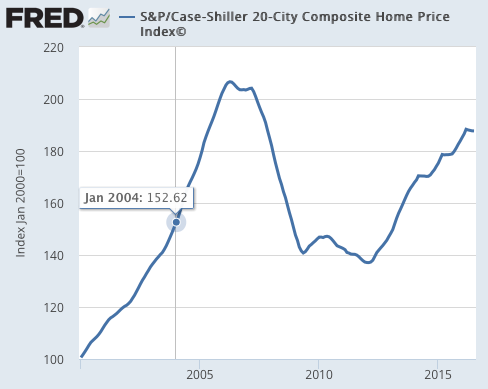 Nationwide, housing prices today are 25% higher than they were at the start of 2004. There is no fundamental yardstick according to which housing values then needed to be "vaporized". The housing bubble was an issue for 2005-6, not as of the start of 2004.

It was (4) that was the misjudgment. And the misjudgment was not that the economy could not handle the adjustment that would follow from the return of housing values from a stratospheric bubble to fundamentals. The economy handled that return fine: from late 2005 into 2008 housing construction slackened, but exports and business investment picked up the slack, and full employment was maintained:

The problem was not that the economy could not climb down from a situation of irrationally exuberant and elevated asset prices without a major recession. The problem lay in the fact that the major money center banks were using derivatives not to lay subprime mortgage risk off onto the broad risk bearing capacity of the market, but rather to concentrate it in their own highly leveraged balance sheets. The fatal misjudgment on Greenspan's part was his belief that because the high executives at money center banks had every financial incentive to understand their derivatives books that they in fact understood their derivatives books.

I asked the typical macro question: who are the twenty biggest suppliers of securitization products, and who are the twenty biggest buyers. I got a paper, and they were both the same set of institutions.... The industry was not aware at the time that while its treasury department was reporting that it bought all these products its credit department was reporting that it had sold off all the risk because they had securitized them...

That elite money center financial vulnerability and the 2008 collapse of that Wall Street house of cards, not the unwinding of the housing bubble, was what produced the late 2008-2009 catastrophe: 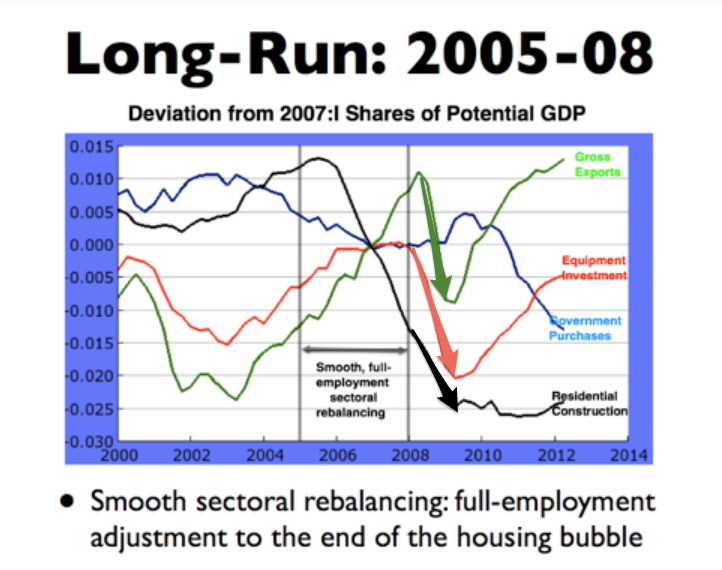 Martin Wolf: Man in the Dock:

Of his time as Fed chairman, Mr Mallaby argues convincingly that:

The tragedy of Greenspan’s tenure is that he did not pursue his fear of finance far enough: he decided that targeting inflation was seductively easy, whereas targeting asset prices was hard; he did not like to confront the climate of opinion, which was willing to grant that central banks had a duty to fight inflation, but not that they should vaporise citizens’ savings by forcing down asset prices. It was a tragedy that grew out of the mix of qualities that had defined Greenspan throughout his public life—intellectual honesty on the one hand, a reluctance to act forcefully on the other.

Many will contrast Mr Greenspan’s malleability with the obduracy of his predecessor, Paul Volcker, who crushed inflation in the 1980s. Mr Greenspan lacked Mr Volcker’s moral courage. Yet one of the reasons why Mr Greenspan became Fed chairman was that the Reagan administration wanted to get rid of Mr Volcker, who “continued to believe that the alleged advantages of financial modernisation paled next to the risks of financial hubris.”

Mr Volcker was right. But Mr Greenspan survived so long because he knew which battles he could not win. Without this flexibility, he would not have kept his position. The independence of central bankers is always qualified. Nevertheless, Mr Greenspan had the intellectual and moral authority to do more. He admitted to Congress in 2008 that: “I made a mistake in presuming that the self-interests of organisations, specifically banks and others, were such that they were best capable of protecting their own shareholders and their equity in the firms.” This “flaw” in his reasoning had long been evident. He knew the government and the Fed had put a safety net under the financial system. He could not assume financiers would be prudent.

Yet Mr Greenspan also held a fear and a hope. His fear was that participants in the financial game would always be too far ahead of the government’s referees and that the regulators would always fail. His hope was that “when risk management did fail, the Fed would clean up afterwards.” Unfortunately, after the big crisis, in 2007-08, this no longer proved true.

If Mr Mallaby faults Mr Greenspan for inertia on regulation, he is no less critical of the inflation-targeting that Mr Greenspan ultimately adopted, albeit without proclaiming this objective at all clearly. The advantage of inflation-targeting was that it provided an anchor for monetary policy, which had been lost with the collapse of the dollar’s link to gold in 1971 followed by that of monetary targeting. Yet experience has since shown that monetary policy is as likely to lead to instability with such an anchor as without one. Stable inflation does not guarantee economic stability and, quite possibly, the opposite.

Perhaps the biggest lesson of Mr Greenspan’s slide from being the “maestro” of the 1990s to the scapegoat of today is that the forces generating monetary and financial instability are immensely powerful. That is partly because we do not really know how to control them. It is also because we do not really want to control them. Readers of this book will surely conclude that it is only a matter of time before similar mistakes occur.

At least as I read Mallaby, he does not criticize Greenspan for "inertia on regulation" nearly as much as he does for Greenspan's failure to "vaporise citizens’ savings by forcing down asset prices..." even when there is no evidence of rising inflation expectations or excess demand in the goods and labor markets as a whole.

I think one of the things that really struck me was that, in Davos, I was invited to a group of banks--now Deutsche Bundesbank is frequently mixed up in invitations with Deutsche Bank.

When I was at this meeting--and I really should have been at these meetings earlier--I was talking to the banks, and I said: "It looks to me that since the buyers and the sellers are the same institutions, as a system they have not diversified". That was one of the things that struck me: that the industry was not aware at the time that while its treasury department was reporting that it bought all these products its credit department was reporting that it had sold off all the risk because they had securitized them.

What was missing--and I think that is important for the view of what could be learned in economics--is that finance and banking was too-much viewed as a microeconomic issue that could be analyzed by writing a lot of books about the details of microeconomic banking. And there was too little systemic views of banking and what the system as a whole would develop like.

The whole view of a systemic crisis was just basically locked out of the discussions and textbooks. I think that that is the one big lesson we have learned: that I now when I am on the board of a bank, I bring to that bank a view, don't let us try to optimize the quarterly results and talk too much about our own idiosyncratic risk, let's look at the system and try to get a better understanding of where the system is going, where the macroeconomy is going. In a way I take a central banker's more systemic view to the institution-specific deliberations. I try to bring back the systemic view. And by and large I think that helps me understand where we should go in terms of how we manage risks and how we look at risks of the bank compared to risks of the system.

This, from the very sharp Martin Wolf, seems to me to go substantially awry when Martin writes the word "convincingly". Targeting inflation is not easy: you don't see what the effects of today's policies are on inflation until two years or more have passed. Targeting asset prices, by contrast, is very easy indeed: you buy and sell assets until their prices are what you want them to be.