This is remarkable: Since the inauguration of Brownback, One out of every 17 nonfarm jobs that we would have expected to see in Kansas are simply not there. Call it 100,000 missing Kansas jobs now: 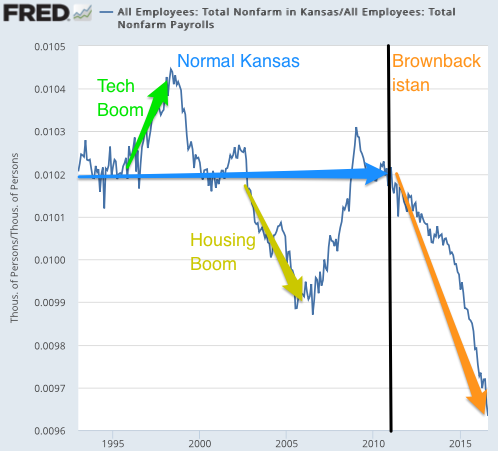 Between the start of the Bill Clinton administration and the inauguration of Governor Brownback, Kansas had 1.02% of tha nation's nonfarm jobs. Relative to the rest of the country, it boomed somewhat during the wondertech years of the late 1990s, increasing its share of jobs by 1/50--but that was temporary. Relative to the rest of the country, it busted somewhat during the housing bubble years of the mid 2000s, losing 1/33 of its share of jobs--but that too was temporary. However, Brownback has made things very different--and I see no sign that this is not permanent. What is supposed to reverse this trend? 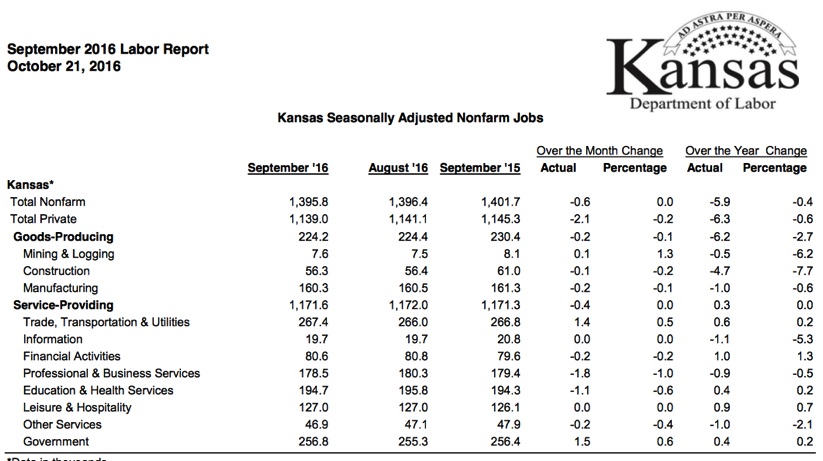 Back in 2011--just after he was elected--the Brownbackistanis were all very confidently predicting that come 2015 Sam Brownback would be spending all his time in Iowa and New Hampshire. He would be making a well-funded run for president as the man who had brought to the prairie both of:

And just maybe, they said then, right now Sam Brownback might be leading the presidential race.

That did not turn out to be the case.

It is somewhat surprising to me that Brownback is not able to at least claim victory. Back in early 2011, I thought that the odds were that he would. After all one-third of Kansas's population hugs the Missouri state line. The Kansas-Missouri border is, for most of its length, a straight flat north-south line at 94˚38'W. It has no geographical features. It runs through the middle of the two-million Kansas City metroplex.

Brownback's state income tax cuts were large. They should have pulled people (and jobs) across State Line Road, seeking the elimination of state income taxes on their business-profit income from LLCs, S corps and sole proprietorships. They should have pulled enough people across State Line Road to allow the Brownbackistanis to declare victory--never mind that it would not have been real growth, but only a negative-sum transfer away from neighboring Missouri.

But it did not work.

The most convincing explanations I have heard have now come from no fewer than four people with senior experience in state budgeting under Republican governors. They say, roughly:

When your state Republican Party is seriously listening to Arthur Laffer and Steve Moore, people deciding on where to locate their businesses are going to automatically assume that your business climate is about to become bad. They see the state Republican party following Moore and Laffer over the cliff into unsustainable policies where the numbers don't add up. And they expect a big backlash someday. They don't know what form it will take. But they do know is that it is a source of risk. And no business wants to add an extra source of risk...

Moreover, it appears that moving money from the state budget where it is spent in-state into the pockets of the rich whose marginal propensity to spend in-state is low has consequences. And there are the consequences of not expanding Medicaid. As a result of non-expansion and Brownback-driven spending cuts $1 billion/year of government-funded spending that would be happening were Kansas part of Colorado is simply not happening. If the in-state multiplier is (a high) two, then the simple Keynesian model would account for 20,000 of those missing jobs. But by now there is much more going on.

And yet the voters of Kansas reelected the clown in 2014. He conintues to strive to make Kansas "less like California, more like Texas." But Texas has a hell of a lot of oil, real mountains and a real seacoast, a culture very welcoming to Hispanics, a still-boosterish upper class, and no winters. Kansas lacks all of these. It is actually: "less like Minnesota, more like Mississippi."

And, of course, national press coverage of this has been lousy. The piece that I, personally, found most annoying was written by Chris Suellentrop for the New York Times.

The line from Suellentrop that sticks with me is that Suellentrop wrote that he "prefers" to emphasize the part of the story of Brownbackistan that makes the Brownbackistanistas--cough, his uncle Gene Suellentrop, and his uncle's colleagues--look like good people who, when the chips are down, preferred to "violate a deeply held principle to protect what they saw as the common good" and so come down on the side not of ideology but humanity:

Chris Suellentrop: The Kansas Experiment: "The cuts to education were real...

...and they have been the most controversial outcome of the budget agreement in Kansas. But I prefer to emphasize this aspect of the deal: A group of politicians decided to violate a deeply held principle to protect what they saw as the common good.... Conservatives in the Kansas statehouse... hit bottom on the amount of government that could be cut. But that’s what happened. If they could have cut spending more deeply without doing immeasurable harm to schools, to prisons, to mental hospitals, to roads, they would have done so. Over and over, they told me they didn’t run for office to raise taxes. Then they did exactly that...

Going the extra mile to make your Uncle Gene look like less of an a**hole than he is--telling the story not as it is but, rather, preferring to "emphasize" those parts of it that make your uncle look less bad--that is simply not the proper business of a reporter.

Did and does Uncle Gene not know that Brownback, Moore, Laffer, and company were making false claims that the tax-and-budget cuts would be "like a shot of adrenaline into the heart of the Kansas economy"? Or did and does he know it, and yet went and goes forward anyway?

Not a way to build your reputation as a trusted and disinterested high quality information intermediary, New York Times...

This is remarkable: Since the inauguration of Brownback, One out of every 17 nonfarm jobs that we would have expected to see in Kansas are simply not there. Call it 100,000 missing Kansas jobs now: