The first thing to note is the absence of any mention here of ObamaCare. Whatever else you think of ObamaCare:

Again, I am not sure whether Romney was so underbriefed as not to understand that "entitlement reform" had been done as part of ObamaCare, or knew and preferred to ignore the fact because it had been done by changing the revenue path in the outyears rather than by cutting Medicare and Social Security spending now.

The second reason Romney is certain is because he is ignoring bond prices. Note that Romney takes absolutely no account of what financial markets are doing. His obliviousness is total.

Financial markets back in 2012 did not expect the scenario that Romney could see as clearly as he could have, had he looked to his left, seen the video camera on the side table recording him: 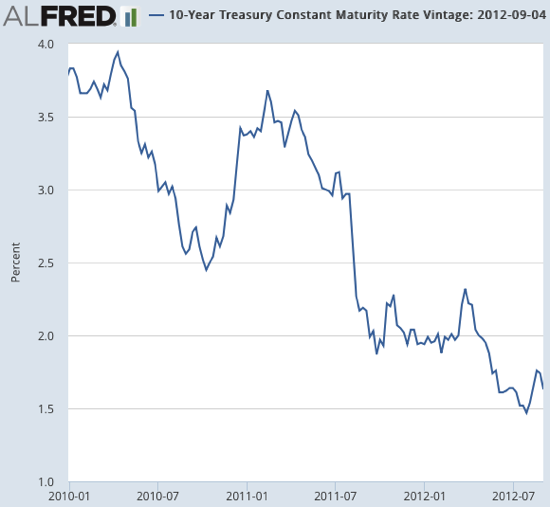 If interest rates are going to have to go up and inflation is going to spiral upward, what was the 10-year Treasury rate doing trading between 1.5% and 1.75%? And why did none of his briefers--whenever Romney began talking about national bankruptcy, inflation, etc, point out that his story was grossly inconsistent with what the bond market was thinking?'

The standard Republican-austerian-inflationista parry for the past six years has been that the bond market did not forecast "Greece" either. Yes--but that was because of three things: 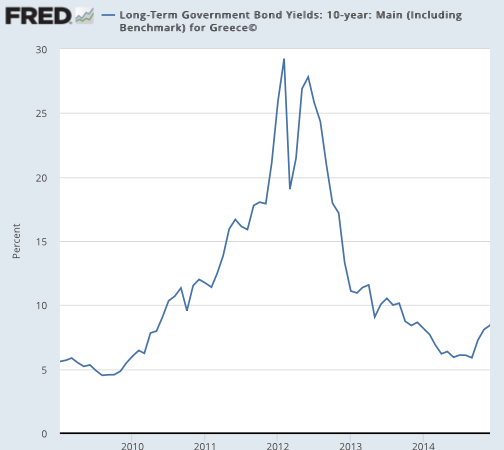 A government that does not run and fears that it will not be supported by the central bank vs. the United States of America, printer of the largest safest asset tranche in the world? Not comparable. Not comparable at all.

As I said in my earlier piece on this, it is remarkable how bad Romney's economic policy briefings were. And I would dearly like the people who gave them to open up as to why this was the line Romney was pushing back then: Who were the grifters? Who were the marks? Why were the grifters grifting? Why were the marks so gullible? What did the economic policy briefers expect to happen when the liquidity trap rolled forward?

There is always Douglas Holtz-Eakin: "Someday the inflation rate will rise about 2%, and then we will declare victory and all of our warnings justified." Are they all really that cynical? And was Mitt Romney one of the cynical ones, or one of the trusting ones? And, in either case, why?

The former head of Goldman Sachs, John Whitehead, was also the former head of the New York Federal Reserve. And I met with him, and he said as soon as the Fed stops buying all the debt that we're issuing—which they've been doing, the Fed's buying like three-quarters of the debt that America issues. He said, once that's over, he said we're going to have a failed Treasury auction, interest rates are going to have to go up.

We're living in this borrowed fantasy world, where the government keeps on borrowing money. You know, we borrow this extra trillion a year, we wonder who's loaning us the trillion? The Chinese aren't loaning us anymore. The Russians aren't loaning it to us anymore. So who's giving us the trillion? And the answer is we're just making it up. The Federal Reserve is just taking it and saying, "Here, we're giving it." It's just made up money, and this does not augur well for our economic future.

You know, some of these things are complex enough it's not easy for people to understand, but your point of saying, "bankruptcy", usually concentrates the mind.... By and large people don't get it. People in our party.... We've been talking about deficits and debt for about 25 or 30 years as a party, and so they've heard us say it and say it and say it. The fact that Greece is going what it's going through, and they read about France and Italy and Spain, has finally made this issue topical for the American people....

Debt, that doesn't calculate for folks, but the deficit does. They recognize you can't go on forever like this. Although the people who recognize that tend to be Republicans, and the people who don't recognize that tend to be Democrats. And what we have to get is that 5 or 10 percent in the middle who sometimes vote Republican, sometimes vote Democrat, and have them understand how important this is. It's a challenge.

I did the calculation for folks today.... It's a front-page story... once a year. If you take the total national debt and the unfunded liabilities of Medicare, Social Security, and Medicaid, the amount of debt plus unfunded liabilities per household in America is $520,000. Per household.... 10, 12 times their income. Even though we're not going to be writing the check for that amount per household, they're going to be paying the interest on that. You'll be paying the interest on that....

My generation will be long gone, and you'll be paying the interest. And so you'll be paying taxes, not only for the things you want in your generation, but for all the things we spent money on, which is just—it's extraordinary to think the tax rates, someone calculated what would happen. If we don't change Medicare or Social Security, the tax rate—you know what the payroll tax is now, it's 15.3 percent—if we don't change those programs, that tax rate will have to ultimately rise to 44 percent. The payroll tax.

Then there's the income tax on top, which the president wants to take to 40 percent. Then there's state tax in most states. And sales tax. So you end up having to take 100 percent of people's income. And yet the president, three and a half years in, won't talk about reforming Social Security or Medicare. And when the Republicans do, it's "Oh, you're throwing granny off the cliff." It's like you're killing the kids. The biggest surprise that I have is that young people will vote for Democrats. They look at this and say, "Holy cow! The only guys who are worried about the future of our country and our future are Republicans." But the Democrats, they talk about social issues, draw in the young people, and they vote on that issue. It's like, I mean, there won't be any houses like this if we stay on the road we're on...