The government should help people who are materially struggling. Globalization definitely left some segments of the population struggling, and they deserve help. White people, while still economically dominant over black and Latino Americans in basically every way possible, can suffer from poverty too. But there’s something striking about this line of commentary: It doesn’t take the stated concerns of Trump voters, and voters for similar far-right populists abroad, seriously in the slightest.

The press has gotten extremely comfortable with describing a Trump electorate that simply doesn’t exist.

Michelle Cottle describes his supporters as “white voters living on the edges of the economy.” This is, in nearly every particular, wrong. There is absolutely no evidence that Trump’s supporters, either in the primary or the general election, are disproportionately poor or working class. Exit polling from the primaries found that Trump voters made about as much as Ted Cruz voters, and significantly more than supporters of either Hillary Clinton or Bernie Sanders. Trump voters, FiveThirtyEight's Nate Silver found, had a median household income of $72,000, a fair bit higher than the $62,000 median household income for non-Hispanic whites in America.... This shouldn’t be surprising. Lower-income whites are always likelier to support Democrats than other whites. It’d be very odd if Trump singlehandedly reversed that longstanding trend in American public opinion. But it suggests that the image of Trump supporters as whites on the economic margins, being failed by the elites in Washington and New York, is wrong.

So what is driving Trump supporters? In the general election... what’s driving support for Trump is that he is the Republican nominee, a little fewer than half of voters always vote for Republicans, and Trump is getting most of those voters. In the primary, though, the story was, as my colleague Zack Beauchamp has explained at length, almost entirely about racial resentment. There’s a wide array of data to back this up.... Michael Tesler has found that support for Trump in the primaries strongly correlated with respondents' racial resentment, as measured by survey data. Similarly, Republican voters with the lowest opinions of Muslims were the most likely to vote for Trump, and voters who strongly support mass deportation of undocumented immigrants were likelier to support him in the primaries too. In April, when the Pew Research Center asked Republicans for their views on Trump, and their opinions on the US becoming majority nonwhite by 2050, they found that Republicans who thought a majority nonwhite population would be "bad for the country" had overwhelmingly favorable views of Trump. Those who thought it was a positive or neutral development were evenly split on Trump.

By contrast, John McCain in 2008 and Mitt Romney in 2012 got less primary support from voters with high racial resentment and anti-immigration scores than they did from less racially resentful or anti-immigrant voters. Those two primaries were lost by the white nationalist wing of the Republican Party at a time when that wing was gaining in number. As New America's Lee Drutman has found, Republicans’ views of blacks and Latinos plummeted during the Obama years: 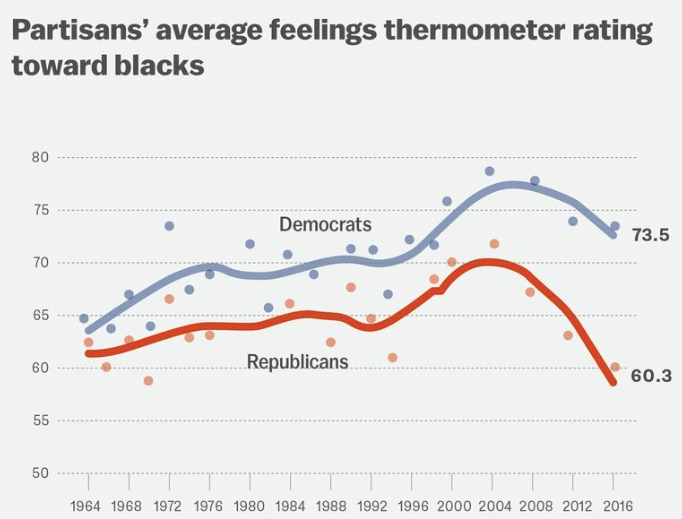 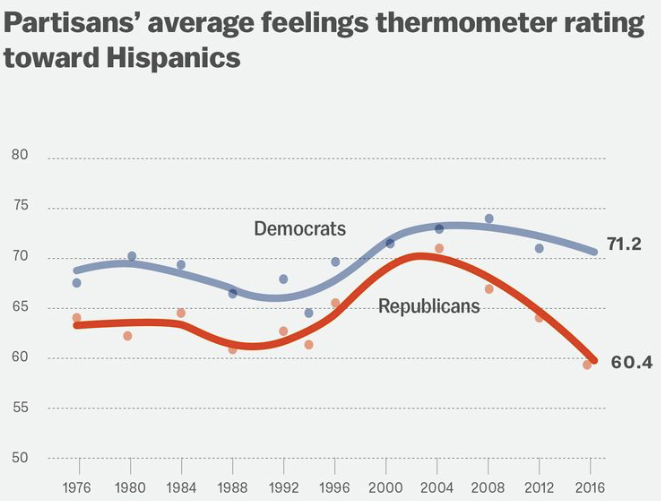 The white nationalist wing was gaining in strength, and due for a win. It got one in Trump. Even in the general election, while support for Trump is correlated most strongly with party ID, the second biggest factor, per the analysis of Hamilton College political scientist Philip Klinkner, was racial resentment. Economic pessimism and income level were statistically insignificant. The message this research sends is very, very clear. There is a segment of the Republican Party that is opposed to racial equality. It has increased in numbers in reaction to the election of a black president. The result was that an anti–racial equality candidate won the Republican nomination.

Given that the US is one recession away from a Republican winning the presidency, this is a concerning development. Taking Trump supporters seriously means not pretending their concerns are about the economy. The American press... ignore[s] this evidence and insist[s] that Trump supporters are in fact the wretched of the earth... connect[s] them with every possible pathology of white America: post-industrial decay, the opioid crisis, labor force dropouts, rising middle-age mortality rates, falling social mobility, and so on....

Comprehensive welfare states are very, very good. They do not solve racism. Whites in both Europe and America have made it very clear that they will not accept becoming a demographic minority without a fight, and will continue to vote for candidates that speak to that concern and promise immigration policies that put off white minority status for as long as possible....

Trump’s nomination is a threat to America that must be addressed and never allowed to happen again. Giving up is not an option. We have to figure out some way to respond. Nor is somehow denying Trump supporters material support they need an option (though this is a proposal I’ve only ever heard attacked by journalists sympathetic to Trump supporters; I’ve never heard it actually proposed). Hillary Clinton, to her great credit, has offered programs ranging from expanded child care to free college to a plan to fight the opioid epidemic to child tax credit expansions to improvements to Obamacare that will leave millions of white Trump supporters much better off. This isn’t worth doing to win back their votes; it’s worth doing because it’s the right thing to do. Notably, Trump is not proposing anything like this.... The idea that voters are motivated by economic struggles and so are voting for a candidate who would make their economic situation far worse is much more insulting than accepting they are uncomfortable with racial equality... dupes voting for the wrong candidate because they’re too dumb to Google his tax plan....

What’s needed is an honest reckoning with what it means that a large segment of the US population, large enough to capture one of the two major political parties, is motivated primarily by white nationalism and an anxiety over the fast-changing demographics of the country. Maybe the GOP will find a way to control and contain this part of its base. Maybe the racist faction of the party will dissipate over time, especially as Obama’s presidency recedes into memory. Maybe it took Trump’s celebrity to mobilize them at all, and future attempts will fail. But Donald Trump’s supporters’ concerns are heavily about race. Taking them seriously means, first and foremost, acknowledging that, and dealing with it honestly.

The government should help people who are materially struggling. Globalization definitely left some segments of the population struggling, and they deserve help. White people, while still economically dominant over black and Latino Americans in basically every way possible, can suffer from poverty too. But there’s something striking about this line of commentary: It doesn’t take the stated concerns of Trump voters, and voters for similar far-right populists abroad, seriously in the slightest.

The press has gotten extremely comfortable with describing a Trump electorate that simply doesn’t exist.