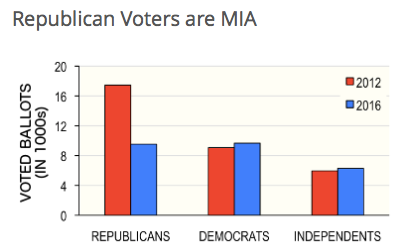 North Carolina’s registered Republicans simply aren’t voting (so far, anyway) in anything like the numbers they typically post. This is surely the most bizarre result we’ve ever seen in decades of poll-watching…but then, by any reasonable criterion this is also the most bizarre election year in modern history.

ABM voting is typically the almost exclusive domain of Republicans (as the red bars in the figure above – for 2012 – illustrate). Democrats typically prefer in-person Early Voting (which begins on October 20th this year). But this election, while both Dems and independents have posted modest upticks relative to 2012 (107% and 106%, respectively), Republicans are voting at just 55% of their 2012 numbers. And this ‘Trump slump’ fully accounts for the overall decline in ABM voting so far.

It’s hard to imagine a reasonable scenario in which the mere mechanics of vote tabulation by the Board of Elections could yield numbers like these, short of bizarre conspiracy theories...