Note to Self: Inadequate Musings on Elements of Rogoff's Debt Supercycle Hypothesis 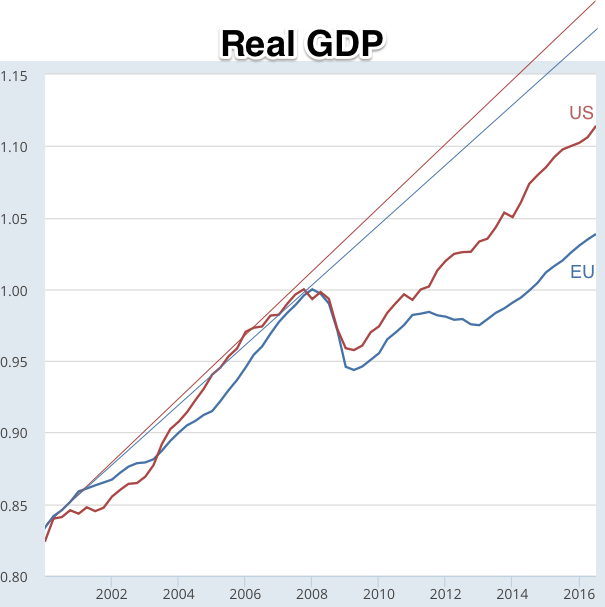 It is, once again, time for me to think about Ken Rogoff's hypothesis: his claim that right now the world economy as a whole is depressed because we are in the down phase of a debt supercycle--dealing with a debt overhang.

I have never been able to make enough sense of Rogoff's perspective here to find it convincing.

I should, however, warn people that when I fail to see the point of something that Ken Rogoff has written, the odds are only one in four that I am right. The odds are three in four that he is right, and I have missed something important:

One way to view the situation is that there have been four serious diagnoses of the ills of the Global North. They are:

The policies recommended by the different diagnoses do differ:

Let me put the other three to the side, and focus on Rogoff here...

A principal implication of Rogoff's hypothesis is that, if it is true, that there is no complete and quick fix : recovery is inevitably a lengthy process--although good policies can accelerate and bad policies retard full recovery.

As I understand it, the down phase of what Ken Rogoff calls a debt supercycle can be generated by some or all of:

How long it takes to work off a debt supercycle and rebalance the economy depends on the speed of the processes of:

As long as we remain in the down-phase of the debt supercycle, even low interest rates do little to encourage the investment spending needed to drive the economy to full employment. Why? Because investment spending requires not just positive expected value given the interest rate, but also the commitment of risk bearing capacity, which is absent because of the debt overhang.

My first reaction is that the right way to deal with this is to rebalance the economy by undertaking economic activities that do not require the deployment of risk bearing capacity to set them in motion. Governments with exorbitant privilege that have ample fiscal space should borrow and spend--most desirably on things that raise potential output in the future, but other worthwhile activities that create utility are also fine.

As I wrote: We have underemployment. We have interest rates on government debt and thus the debt amortization costs of the government far below any plausible rate of return on productive public investments (or, indeed, any plausible social rate of time discount geared to a sensible degree of risk aversion and the trend rate of technological progress). Under such circustances, at least reserve currency-issuing governments with exorbitant privilege should certainly be spending more, taxing less, and borrowing.

But Rogoff seems to disagree:

Kenneth Rogoff (2011): The Second Great Contraction: "Many commentators have argued that fiscal stimulus has largely failed... because it was not large enough...

...But, in a “Great Contraction,” problem number one is too much debt. If governments that retain strong credit ratings are to spend scarce resources effectively, the most effective approach is to catalyze debt workouts and reductions.... Governments could facilitate the write-down of mortgages in exchange for a share of any future home-price appreciation.... Europe could perhaps be persuaded to engage in a much larger bailout for Greece (one that is actually big enough to work), in exchange for higher payments in ten to fifteen years if Greek growth outperforms...

...What if a diagnosis of secular stagnation is wrong? Then an ill-designed permanent rise in government spending might create the very disease it was intended to cure.... There can be little doubt that a debt super cycle lies behind a significant part of what the world has experienced over the past seven years. This resulted first in the US subprime crisis, then the eurozone periphery crisis, and now the troubles of China and emerging markets. The whole affair has strong precedent.... America’s experience--whether one looks at the trajectory of housing and equity prices, unemployment and output, or public debt--has uncannily tracked benchmarks from past systemic financial crises. This is not to say that secular factors are unimportant. Most financial crises have their roots in a slowing economy that can no longer sustain excessive debt burdens...

Rogoff seems to have a counter. He seems to think that borrow-and-spend by governments with fiscal space will, or perhaps may, lead, ultimately, to disaster. Why? Because the fiscal space was never really there. The increase in debt issue will transform even the government's old safe debt into risky debt. And the overhang of risky debt will be increased, worsening the problem.

The counter to that, of course is helicopter money: money printing- and financial repression-financed expansionary fiscal policy rebalances the economy at full employment without any risk of incurring a larger overhang of risky debt further down the road.

And Rogoff's response to that is... what?

Paul Krugman: Airbrushing Austerity: "Ken Rogoff weighs in on the secular stagnation debate, arguing basically that it's Minsky, not Hansen...

...that we"re suffering from a painful but temporary era of deleveraging, and that normal policy will resume in a few years.... Rogoff doesn"t address the key point that Larry Summers and others, myself included, have made--that even during the era of rapid credit expansion, the economy wasn't in an inflationary boom and real interest rates were low and trending downward--suggesting that we"re turning into an economy that "needs" bubbles to achieve anything like full employment. But what I really want to do right now is note... people who predicted soaring interest rates from crowding out right away now claim that they were only talking about long-term solvency... people who issued dire warnings about runaway inflation say that they were only suggesting a risk, or maybe talking about financial stability; and so on down the line.... In Rogoff's version of austerity fever all that was really going on was that policymakers were excessively optimistic, counting on a V-shaped recovery; all would have been well if they had read their Reinhart-Rogoff on slow recoveries following financial crises. Sorry, but no....

David Cameron didn't say "Hey, we think recovery is well in hand, so it's time to start a modest program of fiscal consolidation." He said "Greece stands as a warning of what happens to countries that lose their credibility." Jean-Claude Trichet didn't say "Yes, we understand that fiscal consolidation is negative, but we believe that by the time it bites economies will be nearing full employment". He said: "As regards the economy, the idea that austerity measures could trigger stagnation is incorrect ... confidence-inspiring policies will foster and not hamper economic recovery, because confidence is the key factor today." I can understand why a lot of people would like to pretend, perhaps even to themselves, that they didn't think and say the things they thought and said. But they did.

And this part of Ken Rogoff's piece appears to me to be on the wrong track:

...small changes in the market perception of tail risks can lead both to significantly lower real risk-free interest rates and a higher equity premium.... Martin Weitzman has espoused a different variant of the same idea based on how people form Bayesian assessments of the risk of extreme events.... Those who would argue that even a very mediocre project is worth doing when interest rates are low have a much tougher case to make. It is highly superficial and dangerous to argue that debt is basically free. To the extent that low interest rates result from fear of tail risks a la Barro-Weitzman, one has to assume that the government is not itself exposed to the kinds of risks the market is worried about, especially if overall economy-wide debt and pension obligations are near or at historic highs already. Obstfeld (2013) has argued cogently that governments in countries with large financial sectors need to have an ample cushion, as otherwise government borrowing might become very expensive in precisely the states of nature where the private sector has problems...

Note to Self: Inadequate Musings on Elements of Rogoff's Debt Supercycle Hypothesis

It is, once again, time for me to think about Ken Rogoff's hypothesis: his claim that right now the world economy as a whole is depressed because we are in the down phase of a debt supercycle--dealing with a debt overhang.

I have never been able to make enough sense of Rogoff's perspective here to find it convincing.

I should, however, warn people that when I fail to see the point of something that Ken Rogoff has written, the odds are only one in four that I am right. The odds are three in four that he is right, and I have missed something important: