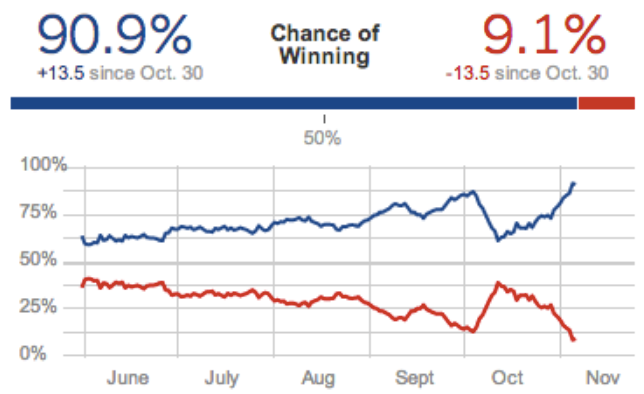 Peggy Noonan (November 5, 2012): Monday Morning: "We begin with the three words everyone writing about the election must say: Nobody knows anything. Everyone’s guessing...

...I spent Sunday morning in Washington with journalists and political hands, one of whom said she feels it’s Obama, the rest of whom said they don’t know. I think it’s Romney. I think he’s stealing in “like a thief with good tools,” in Walker Percy’s old words. While everyone is looking at the polls and the storm, Romney’s slipping into the presidency. He’s quietly rising, and he’s been rising for a while.

Obama and the storm, it was like a wave that lifted him and then moved on, leaving him where he’d been. Parts of Jersey and New York are a cold Katrina. The exact dimensions of the disaster will become clearer when the election is over. One word: infrastructure. Officials knew the storm was coming and everyone knew it would be bad, but the people of the tristate area were not aware, until now, just how vulnerable to deep damage their physical system was.

The people in charge of that system are the politicians. Mayor Bloomberg wanted to have the Marathon, to show New York’s spirit. In Staten Island last week they were bitterly calling it “the race through the ruins.” There is a disconnect.

But to the election. Who knows what to make of the weighting of the polls and the assumptions as to who will vote? Who knows the depth and breadth of each party’s turnout efforts? Among the wisest words spoken this cycle were by John Dickerson of CBS News and Slate, who said, in a conversation the night before the last presidential debate, that he thought maybe the American people were quietly cooking something up, something we don’t know about.

I think they are and I think it’s this: a Romney win.

Romney’s crowds are building—28,000 in Morrisville, Pa., last night; 30,000 in West Chester, Ohio, Friday. It isn’t only a triumph of advance planning: People came, they got through security and waited for hours in the cold. His rallies look like rallies now, not enactments. In some new way he’s caught his stride. He looks happy and grateful. His closing speech has been positive, future-looking, sweetly patriotic. His closing ads are sharp—the one about what’s going on at the rallies is moving.

All the vibrations are right. A person who is helping him who is not a longtime Romneyite told me, yesterday: “I joined because I was anti Obama—I’m a patriot, I’ll join up But now I am pro-Romney.” Why? “I’ve spent time with him and I care about him and admire him. He’s a genuinely good man.” Looking at the crowds on TV, hearing them chant “Three more days” and “Two more days”—it feels like a lot of Republicans have gone from anti-Obama to pro-Romney.

Something old is roaring back. One of the Romney campaign’s surrogates, who appeared at a rally with him the other night, spoke of the intensity and joy of the crowd “I worked the rope line, people wouldn’t let go of my hand.” It startled him. A former political figure who’s been in Ohio told me this morning something is moving with evangelicals, other church-going Protestants and religious Catholics. He said what’s happening with them is quiet, unreported and spreading: They really want Romney now, they’ll go out and vote, the election has taken on a new importance to them.

There is no denying the Republicans have the passion now, the enthusiasm. The Democrats do not. Independents are breaking for Romney. And there’s the thing about the yard signs. In Florida a few weeks ago I saw Romney signs, not Obama ones. From Ohio I hear the same. From tony Northwest Washington, D.C., I hear the same.

Is it possible this whole thing is playing out before our eyes and we’re not really noticing because we’re too busy looking at data on paper instead of what’s in front of us? Maybe that’s the real distortion of the polls this year: They left us discounting the world around us.

And there is Obama, out there seeming tired and wan, showing up through sheer self discipline. A few weeks ago I saw the president and the governor at the Al Smith dinner, and both were beautiful specimens in their white ties and tails, and both worked the dais. But sitting there listening to the jokes and speeches, the archbishop of New York sitting between them, Obama looked like a young challenger—flinty, not so comfortable. He was distracted, and his smiles seemed forced. He looked like a man who’d just seen some bad internal polling.

Romney? Expansive, hilarious, self-spoofing, with a few jokes of finely calibrated meanness that were just perfect for the crowd. He looked like a president. He looked like someone who’d just seen good internals.

Of all people, Obama would know if he is in trouble. When it comes to national presidential races, he is a finely tuned political instrument: He read the field perfectly in 2008. He would know if he’s losing now, and it would explain his joylessness on the stump. He is out there doing what he has to to fight the fight. But he’s still trying to fire up the base when he ought to be wooing the center and speaking their calm centrist talk.

His crowds haven’t been big. His people have struggled to fill various venues. This must hurt the president after the trememdous, stupendous crowds of ’08. “Voting’s the best revenge”—revenge against who, and for what? This is not a man who feels himself on the verge of a grand victory. His campaign doesn’t seem president-sized. It is small and sad and lost, driven by formidable will and zero joy.

I suspect both Romney and Obama have a sense of what’s coming, and it’s part of why Romney looks so peaceful and Obama so roiled.

Romney ends most rallies with his story of the Colorado scout troop that in 1986 had an American flag put in the space shuttle Challenger, saw the Challenger blow up as they watched on TV, and then found, through the persistence of their scoutmaster, that the flag had survived the explosion. It was returned to them by NASA officials. When Romney, afterward, was shown the flag, he touched it, and an electric jolt went up his arm. It’s a nice story. He doesn’t make its meaning fully clear. But maybe he means it as a metaphor for America: It can go through a terrible time, a catastrophe, as it has economically the past five years, and still emerge whole, intact, enduring.

Maybe that’s what the coming Romney moment is about: independents, conservatives, Republicans, even some Democrats, thinking: We can turn it around, we can work together, we can right this thing, and he can help.

Peggy Noonan (November 5, 2012): Monday Morning: "We begin with the three words everyone writing about the election must say: Nobody knows anything. Everyone’s guessing...