Must-Read: Why I reacted badly to journalists who asked me to analyze Trump's economic plans. The first, last, and only correct thing to say was that there never was any coherent plan. To say anything else was to try to normalize the unnormalizable. Everyone who wrote as if there was a plan should be deeply ashamed of themselves.

Here Alan Cole gets it... less wrong than most. He is still trying to normalize the unnormalizable. But he is honest about how difficult it was for him to attempt the task:

Alan Cole: _On Twitter: "This is my 407th (and, I expect, final) day covering Donald Trump's tax proposals for @taxfoundation...

Donald Trump's initial effort at tax reform this cycle came in September 2015. My analysis showed it reducing revenues by a huge amount. We put it at a $12 trillion tax cut. At first, the campaign disputed this number. I remember this day well. https://t.co/RuxyeYLiwZ: 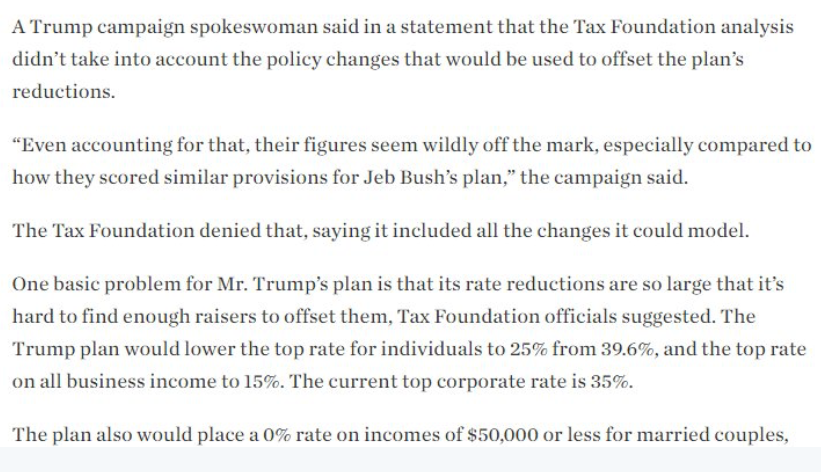 This came back when John McKinnon was the WSJ's tax reporter. (Since then, he has moved to other issues and @RichardRubinDC does tax.) John was going back and forth between us and Hope Hicks, essentially transcribing an argument between me and her that lasted all day.

The initial plan was a gigantic tax cut for both the rich and the middle class, but not all narratives in September 2015 got that right. For example, Trump claimed (wrongly) that his September 2015 tax plan would cost him a fortune https://t.co/ZvpXZlQ0pB.

Simultaneously, many liberals attacked him for cutting taxes on the rich and doing nothing for the middle class, which I thought unfair.

I wrote some analysis trying to set the narrative right. The loser from the 2015 Trump plan was the US Treasury https://t.co/s2KbFgPtVw.

Needless to say, "right" here has no meaning...

Eventually the deficit number became the main story (and rightly so.) @JebBush attacked the plan in the October debate. Unfortunately in the fiscal policy part of the debate, Bush also talked about giving "a warm kiss" to Democrats, which was weird.

By 2016, @larry_kudlow was looking at ways to reduce the revenue loss from the 2015 Trump tax plan https://t.co/Obm0wnUyrT. Whispers of a new tax plan kept on happening throughout the summer, without anything concrete happening. Trial balloons were floated. In some cases, the responses to the trial balloons actually made a difference, such as here: https://t.co/y38V6c6mH2. Tax experts like @lilybatch criticized the pairing of expensing with interest deductions. Apparently this had an impact!

In the end, the campaign made expensing/interest deductibility an either/or choice, probably because of the @RichardRubinDC article. A Detroit speech, still on Trump's website, was the main source of info on the "new" tax plan for a while. https://t.co/X1w3MjFwPH Contained in the Detroit speech was this passage, including a key pledge to a major Republican constituency: pass-through businesses:

That pledge was one of the biggest tax stories. It was promised, un-promised, re-promised, and then collapsed into confusion.

All of that came to a head on the day of the release of the new tax plan, on a Thursday in September 2016. https://t.co/GRoCF0W8Vi. I was told this, which seemed to be backed up by the website at the time, mentioning only "corporate" rate:

Email response from Trump Deputy Policy Director: "the 15 percent rate only applies to businesses that are taxed as corporations."

Key small-biz advocates were unhappy with the development, as reported by me:

Trump just quietly walked back the single best aspect of his tax plan to save a buck http://taxfoundation.org/blog/details-donald-trump-tax-reform-plan-september-2016

But eventually the NFIB "reacted" to the plan with this statement, praising it for keeping the promise: https://t.co/iISZMAKmHv.

Further, the website changed! As noted by this "baffled-tone" tweetstorm from the time:Alan Cole added,

Richard Rubin @RichardRubinDC: Campaign site https://twitter.com/RichardRubinDC/status/776586854720163840 says 15 is for big and small that "want to retain the profits within the business." Whoa there...

The next day, Friday, @BCAppelbaum charged hard at the story and released this piece: https://t.co/ZjB4EJryxp.

The idea of the piece: Trump wanted tax analysts to keep the price tag of the plan low, but small biz to think the promise was kept. This line of argument eventually was used by Clinton campaign officials like @genebsperling:A

Sperling alleges that they're touting the 15% rate for passthroughs on the campaign trail, and then scaling it back "in quiet rooms."

I had to delay my analysis throughout the weekend while I tried to figure out what was going on:

I do not have any new information about the Trump tax plan today. Thank you for your questions!

But what was going on was that nothing was going on. They were not even coherent enough to try to keep two sets of books--an NFIB-pleasing set and a deficit-hawk set. It was just incoherent...

Finally, we released our analysis with two scores of the Trump plan that we set as a sort of upper and lower bound on the policy. We never got clear answers on this: other Trump mysteries were much the same way. What happened to that money for vets? Who knows?

There were no clear answers because there was no policy...

It was easy to get wrapped up in annoyance over the passthrough issue, but I tried to give Trump praise for his bold corporate proposal:

Why, in God's name? There is no proposal--nothing coherent. Why praise him?

In the final days of the election, the main voices on the Trump tax plan shifted from Kudlow to Peter Navarro and Wilbur Ross. Kudlow and Navarro have differences on trade, and sadly, I think Navarro won the struggle over that part of the agenda. Eventually Navarro's views on trade became the dominant topic of discussion even at tax policy events.

But that does not mean that Navarro "won" anything. Trump could still say anything on any day without being bound by any prior statements or position papers.

Nick Riccardi @NickRiccardi: That the Trump tax discussion at Tax Policy Center is largely about trade is basically all you need to know.

This was a turning point for some prominent tax cutters. They're about free movement of goods/services. Navarro's views just don't fit. Grover Norquist now spends his days tweeting about vaping. Art Laffer watches documentaries about whales(!) https://t.co/40yjysWKOZ. The feeling of detachment and discouragement among the traditional free-market coalition is pretty palpable. I'd expect a brawler-style tax cutting candidate to be Norquist/Laffer's best friend, but he's not. There's a story worth telling there.

There's still a constituency in the U.S. for free market policy for as long as supply curves slope upwards. (Spoiler alert: they do.) But Trump is not a good avatar for the free market coalition, and it's pretty obvious if you see how free marketers are reacting to him. This is a realigning election, without doubt. It has left powerful constituencies adrift. But most of them will be back in some form.

So I expect the presidential economic policy debates in the future to be just as "interesting" as the one we've just lived through.

So that's what I've learned in the last 407 days covering Donald Trump's tax plans. I can't say it was dull. Happy election day!

Still, I look at things like: "The Taxes and Growth model says that the rate reductions alone would lead to a 4.1% increase in real GDP". And I cannot help but think: Alan Cole is being unprofessional here. He implies that there is a coherent Trump plan, and that when all its moving parts are nailed down and estimates are made the model will say it leads to a greater than 4.1% increase in real GDP. But there is no coherent Trump plan. There are no moving parts that need to fit together. There are no estimates. And there never will be any estimates.

Alan Cole did not do that. His failure shadows all of my understanding and evaluation of his work.

Must-Read: Why I reacted badly to journalists who asked me to analyze Trump's economic plans. The first, last, and only correct thing to say was that there never was any coherent plan. To say anything else was to try to normalize the unnormalizable. Everyone who wrote as if there was a plan should be deeply ashamed of themselves.

Here Alan Cole gets it... less wrong than most. He is still trying to normalize the unnormalizable. But he is honest about how difficult it was for him to attempt the task:

Alan Cole: _On Twitter: "This is my 407th (and, I expect, final) day covering Donald Trump's tax proposals for @taxfoundation...