I see that the Financial Times has given Blackstone CEO Tony James a column to say: "To revive America's economy, raise interest rates".

Let us suppose that we had been transported to some other branch of the multiverse, along which the Federal Reserve had not held interest rates at zero but had steadily and gradually raised them for the past six years them so that the Federal Funds rate now stood at 400 basis points. What does the economy look like along our branch and along that branch? 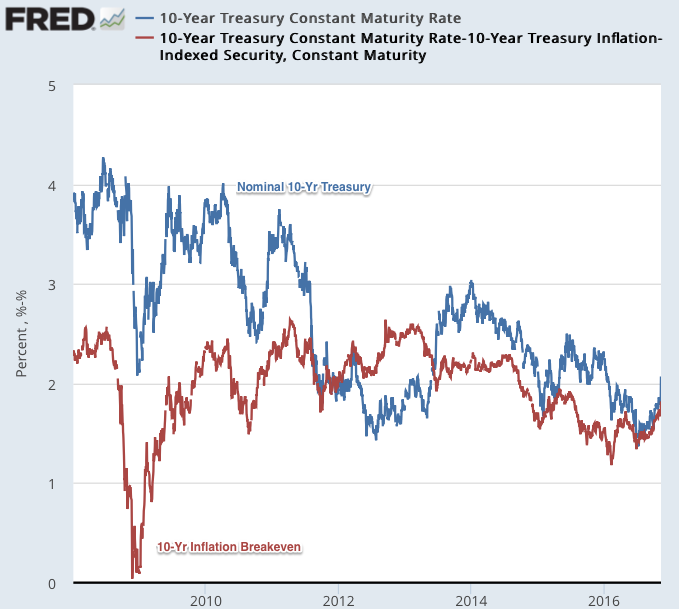 Along this, our, branch of the multiverse, the fourth quarter of 2015 saw household, businesses and foreigners save $940 billion here in the United States, all of which flowed into financial markets searching for interest- and dividend-paying savings vehicles. Of that $940 billion, $185 billion of it found a home in the net new bond issues of all levels of government. The rest--$755 billion in the fourth quarter of 2015--found its home in interest- and dividend-paying savings vehicles tied to American businesses: loans, bonds, new equity issues, and so forth. And that flow of money was in turn spent adding to the productive capital stock of America's private sector.

Along that branch of the multiverse--the ones with interest rates 400 basis points higher--there would not have been $755 billion of new savings vehicles created in the fourth quarter of 2015 to fund investment. Perhaps the firms that Tony James talks to do not cut back on their investment plans when interest rates rise. But other firms do. The level of interest rates matters mightily for construction, especially along the coast where real estate values are especially sensitive to how much cash flow is required to amortize $1 of purchase price. It matters for the consumer durables financing cycle. It matters for the host of small businesses that are always seeking to expand but face high financing costs because their prospects are uncertain.

And so between $20 billion and $55 billion of savings in the fourth quarter of 2015 would have found a home by taking cash out of the liquidity balances that support the flow of spending. The Federal Reserve could have responded to this and held the economy harmless by adding to the economy's stock of cash--but then interest rates would have fallen, and we would be where we are now. If the Federal Reserve had stood by and maintained the Fed Funds rate at 400 basis points, this diversion of the financial flow away from-investment and into idle cash balances would have pushed spending down and the economy into renewed recession.

"No," says Tony James. "That is not what I wanted at all. I wanted the Confidence Fairy to return, touch all industries with her magic wand, and make them continue their production and their demand for the wares of others. I wanted businesses to still create $755 billion of savings vehicles in 2015:IV to keep the economy in balance at the higher interest rates."

And if the Confidence Fairy had listened, then everything would indeed be fine.

The economy would then have maintained its current near-full employment state even with sharply higher interest rates. And all the bad things that Tony James sees as flowing from abnormally low interest rates--"substitut[ion of] capital for labour to an unnatural degree... hurt [to] the elderly and others who depend on income-producing investments... increase[d] savings required to make up the [retirement] gap... systemic risks... [from] encourag[ing] investors to buy esoteric assets as they grasp for higher returns... banks cannot lend profitably"--would indeed have come to an end.

The problem is that all of this does not flow from the Federal Reserve raising interest rates of its own independent volition.

All of this flows from a greater willingness to create savings vehicles and invest on the part of businesses, which is then followed by the Federal Reserve allowing interest rates to rise in order to head off excess demand and rising inflation. And thus it requires to start it off not FOMC decision in the Eccles Building's conference room but instead stronger desire on the part of those who spend to create interest- and dividend-paying vehicles for America's savers.

Now the Federal Reserve has tried to induce the creation of more interest- and dividend-paying savings vehicles.

It has, after all, engaged in $3 trillion of quantitative easing. It has thus taken off of private-sector balance sheets duration risk that bond dealers used to have to pay savers $30 billion/year to bear. That $30 billion/year of risk-bearing capacity has presumably been used to fund risky investment projects and create savings vehicles that had been going begging. But as my ex-roommate Robert Waldmann constantly reminds me--and Tony James would certainly agree--a financial organization competent at assessing and bearing duration risk may well not be competent at whatever other risky business it enters as it chases yield.

But to say that the Federal Reserve should take the lead in raising interest rates when the loanable funds market is not signaling any excess supply of interest- and dividend-bearing savings vehicles? That strikes me like somebody in the Pacific Ocean in 1944 thinking that if they to just construct a 3000-foot landing strip that soon cargo-bearing B-17s would start to land.

I see that the Financial Times has given Blackstone CEO Tony James a column to say: "To revive America's economy, raise interest rates".

Let us suppose that we had been transported to some other branch of the multiverse, along which the Federal Reserve had not held interest rates at zero but had steadily and gradually raised them for the past six years them so that the Federal Funds rate now stood at 400 basis points. What does the economy look like along our branch and along that branch?