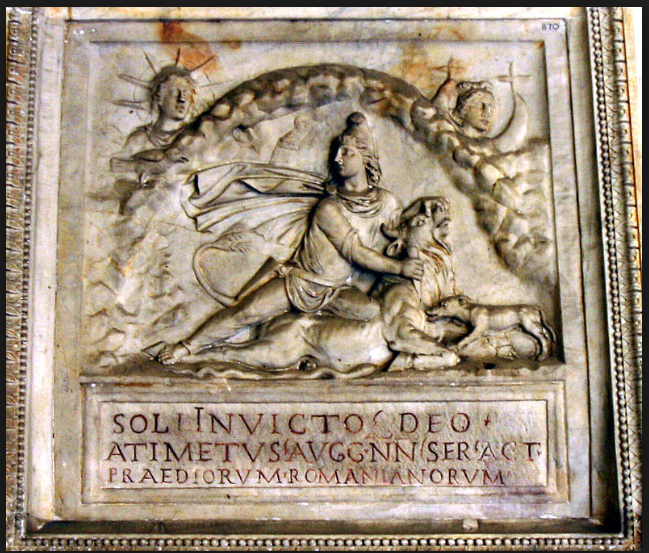 Jeffrey Toobin on Robert Bork: Hoisted from the Internet from Four Years Ago

Hoisted from Others' Archives:

...was an unrepentant reactionary who was on the wrong side of every major legal controversy of the twentieth century. The fifty-eight senators who voted against Bork for confirmation to the Supreme Court in 1987 honored themselves, and the Constitution. In the subsequent quarter-century, Bork devoted himself to proving that his critics were right about him all along.

Continue reading "Jeffrey Toobin on Robert Bork: Hoisted from the Internet from Four Years Ago" »

Must-Read: Simon Wren-Lewis: Understanding Free Trade: "There you have, in one calm and measured paragraph, the contradiction at the heart of the argument...

Must-Read: There is a serious debate about "Uber, floor wax or desert topping?"--excuse me: "Uber: grift or technological and organizational breakthrough?": Izabella Kaminska: Mythbusting Uber’s valuation | Why Uber’s capital costs will creep ever higher. Eric Newcomer: Uber Loses at Least $1.2 Billion in First Half of 2016. Hubert Horan: Can Uber Ever Deliver?: Part 1 | Part 2 | Part 3 | Part 4 | Part 5

Ben Thompson: Reconsidering Uber: "Part 2 is far better, and in many respects redeems the series...

Monday Smackdown: No, Larry Kudlow Is Not an Economist III

Stupidest Man Alive Nomination: Larry Kudlow: Hoisted from the Archives from 2008: One would think that National Review would want to maintain a smidgeon of a reputation, and hence at least edit Larry Kudlow for his biggest howlers. But no. Eschaton reader js informs Atrios of the stupidity:

Continue reading "Monday Smackdown: No, Larry Kudlow Is Not an Economist III" »

Monday Smackdown: No, Larry Kudlow Is Not an Economist II

Continue reading "Monday Smackdown: No, Larry Kudlow Is Not an Economist II" »

Monday Smackdown: No, Larry Kudlow Is Not an Economist

I have only been on the same stage as Larry Kudlow twice in my life. In neither case did he provide any intellectual substance at all. This was the second time:

Hoisted from the Archives from 2007: I was sitting on the right end of an nine-person panel at the New School Friday morning http://www.cepa.newschool.edu/events/events_schwartz-lecture.htm#webcast. Bob Solow was sitting on the left end--Solow, Shapiro, Schwartz, Rohatyn, Kudlow, Kerrey, Kosterlitz, Hormats, DeLong. Bob Solow expressed concern and worry over the declines in the U.S. savings rate over the past generation. Larry Kudlow, in the middle of the panel, aggressively launched into an unbalanced and nearly fact-free rant...

Continue reading "Monday Smackdown: No, Larry Kudlow Is Not an Economist" »

Comment of the Day: Quite Likely: Regional Policy and Distributional Policy in a World Where People Want to Ignore the Value and Contribution of Knowledge- and Network-Based Increasing Returns: "'Instead, the government is supposed to, somehow, via clever predistribution, rearrange the pattern of market power in the economy... 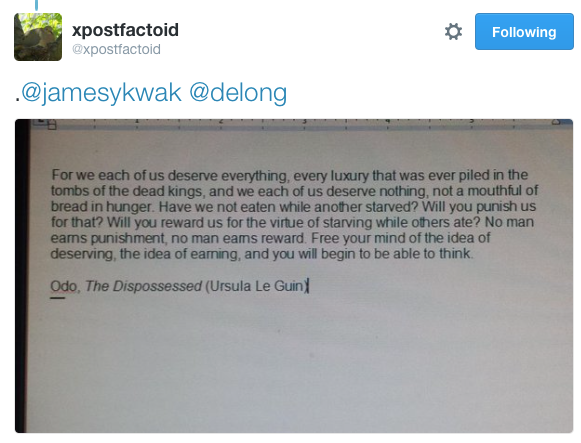 Must Read: In fact, it is looking less and less likely that the Trump deficits will be the kind of fiscal stimulus reality-based economists interested in economic recovery have been pleading for ever since the financial crisis:

Paul Krugman: Will Fiscal Policy Really Be Expansionary?: "It’s now generally accepted that Trumpism will finally involve the kind of fiscal stimulus progressive economists have been pleading for... 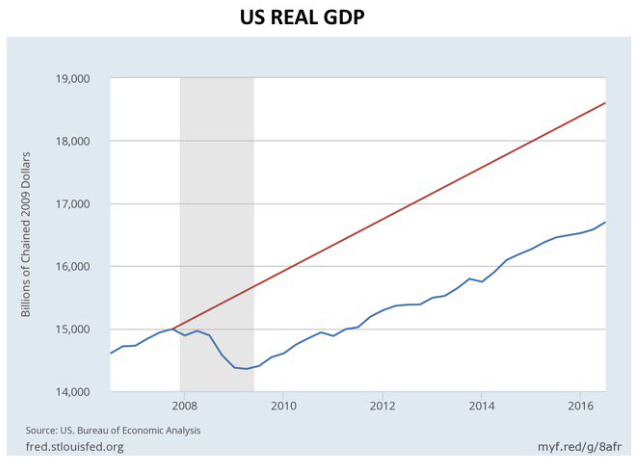 Has macroeconomics gone right? After three years, how is this working out?...

Paul Krugman (2013): The Neopaleo-Keynesian Counter-counter-Counterrevolution: "OK, I can’t resist this one — and I think it’s actually important...

...Brad DeLong reacts to Binyamin Appelbaum’s piece on Young Frankenstein Stan Fischer by quoting from his own 2000 piece on New Keynesian ideas in macroeconomics, a piece in which he argued that New Keynesian thought was, in important respects, a descendant of old-fashioned monetarism. There’s a lot to that view.

Douglas O. Staiger, James H. Stock, and Mark W. Watson (1997): How Precise Are Estimates of the Natural Rate of Unemployment?: "Uncertainty arising from not knowing the parameters of the model at hand...

Comment of the Day: Tim McDermott: Regional Policy and Distributional Policy in a World Where People Want to Ignore the Value and Contribution of Knowledge- and Network-Based Increasing Returns: "Years and years ago I heard an interview with a Carnegie Mellon computer science professor who taught the founders of Lycos...

Should-Read: One loose end left in traditional histories of the Reagan administration is why Argentina moved in and occupied the Falkland Islands in 1982. Why didn't the fear a U.K. response supported by the U.S.'s logistical tail? Here David Drake provides an answer: the Argentine generals thought that they had been of so much assistance to the U.S. in its attacks on Nicaragua that the U.S. would stand aside--and it seems likely that policymakers like Jeane Kirkpatrick, Alexander Haig, William Casey and perhaps Zbigniew Brzezinski (if Drake has not written "1979" where he should have written "1981") had led them to believe that it would be so:

David Drake: What Distant Deeps: "Empires have generally used proxies to fight wars on their borders...

Pascal Lamy: "When the wise man points at the moon, the fool looks at the finger..."

Perhaps in the end the problem is that people want to pretend that they are filling a valuable role in the societal division of labor, and are receiving no more than they earn--than they contribute.

But that is not the case. The value--the societal dividend--is in the accumulated knowledge of humanity and in the painfully constructed networks that make up our value chains. 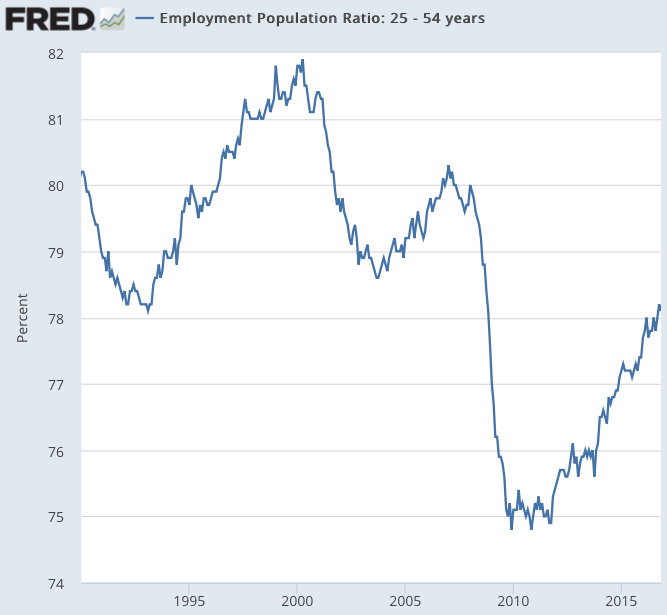 Has academic thinking about countercyclical fiscal policy changed recently? I would not say that thinking has changed. I would say that there is a good chance that thinking is changing--that academia is swinging back to a recognition that monetary policy cannot do the stabilization policy by itself, at least not under current circumstances. But it may not be.

Continue reading "For the Weekend..." »

Weekend Reading: John Steinbeck: The 1930s: A Primer: "Everyone Was a Temporarily Embarrassed Capitalist"

Weekend Reading: John Steinbeck: The 1930s: A Primer: "Except for the field organizers of strikes, who were pretty tough monkeys and devoted...

Continue reading "Weekend Reading: John Steinbeck: The 1930s: A Primer: "Everyone Was a Temporarily Embarrassed Capitalist"" »

I have studied the Mahaparinirvana Sutra (涅槃經) for many years, yet there are many places where the meaning still eludes me. Please would you enlighten me.

Why there will be a lot of policy disasters under our forthcoming unpopular minority government: today's Republicans, fundamentally, do not care whether policies work or not:

...is focused on a statement President Obama made about practicalities and ideologies:

Should-Read: Matthew Yglesias: Trump is going to be mad when he hears what his appointees think about the TPP: "His top economic and foreign policy advisers love it (as do his other advisers)...

Should Read: Greg Sargent: @ThePlumLineGS: "A new CBS poll finds support for [ObamaCare] repeal has dropped 10 points since January, all the way down to 25%: https://t.co/5NnlgJbWhK https://t.co/kAmAAAIn3S"

Should-Read: The more this goes on, the more this looks like Brexiters and Trumpists share an essence: they are all seeking to grab whatever they can while the getting is good, while trying to figure out a way to avoid responsibility and blame for whatever disasters Brexit and Trumpism bring--and there will be disasters. But there will be more disasters if nobody is actually at the tiller. And nobody appears to be--either in Westminster or in Washington:

Philip Stephens: How Brexit May Not Mean Brexit: "Referendums... become a device for demagogues and dictators: the people have spoken so now they must be silent ever more...

Discussion Questions on Partha Dasgupta: Science and Technology as Institutions

Science and Technology as Institutions

What I (try to) make my principals students read before class begins; Partha Dasgupta (2007): Economics: A Very Short Introduction http://amzn.to/2gR2jH3. Question: should I try to make my students in my other classes read it too?

Me: Note: This is a game theorist's short introduction to economics. Its focus is on:

Should-Read: Jason Furman et al.: The 2017 Economic Report of the President: "President Obama was faced with the daunting task of helping to rescue the U.S. economy from its worst crisis since the Great Depression...

Must-Read: Matthew Yglesias: We Should Have Taken Trump Literally as Well as Seriously: "The national press’s Trump coverage did to an extent err by not taking him seriously enough...

Should-Read: The last three of these paragraphs I quote were, I must say, totally wrong. But there is still a lot to be gotten out of the first two:

Karl Marx and Friedrich Engels (1848): The Communist Manifesto: "The bourgeoisie... has played a most revolutionary role...

The downsides of further expansionary policy to see if full employment is an 80% prime-age employment-to-population ratio are small. The upsides are large. We should follow Rikki-Tikki-Tavi, and run and find out.

Paul Krugman: Notes on the Macroeconomic Situation: "So the Fed has raised rates... a mistake, although not as severe... as it would have been a year ago....

More Expansionary FIscal Policy Is Needed: The Only Question Is Whether for a Short-Term Full Employment Attainment or a Medium-Term Full-Employment Maintenance Purpose

This strikes me as a bad mistake: fiscal needed to create space to normalize interest rates and give Fed room to fight next recession https://t.co/49djGBQRdS

Yellen: Fiscal policy is not needed to provide stimulus to get us back to full employment

Continue reading "More Expansionary FIscal Policy Is Needed: The Only Question Is Whether for a Short-Term Full Employment Attainment or a Medium-Term Full-Employment Maintenance Purpose" »

What Is the Excellence of an Economist?

I have been thinking about John Maynard Keynes's observations on the mysterious difficulty of being a first-class economist that I quoted a while ago:

John Maynard Keynes (1924): Alfred Marshall: "The study of economics does not seem to require...

Continue reading "What Is the Excellence of an Economist?" »

Should-Read: Ryan Avent: The Hole at the Heart of Economics: "For many of the most important questions within economics...

Should-Read: Barry Ritholtz: "Popularism" as Farce: "A grift of the uneducated, low information voter, coopted to vote in many ways against their own interests...