Michael DeLong: The Spirit of Emma Lazarus--From the Dulles Airport Protests Against the #MuslimBan #RefugeeBan 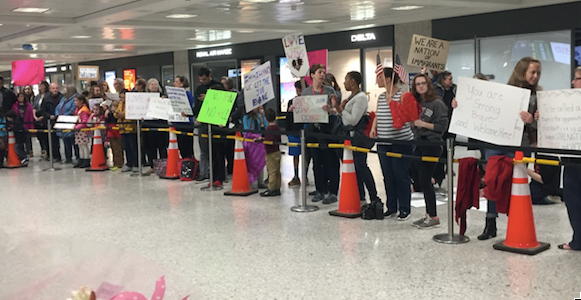 On Friday President Donald Trump signed executive orders dealing with immigration that caused this weekend to turn into chaos, and that will harm hundreds of thousands of people. He suspended all refugee admissions to the United States for 120 days, slashed the U.S. refugee quota for 2017, and barred all entry to the United States for nationals of seven countries—Iraq, Iran, Libya, Somalia, Sudan, Syria, and Yemen.

America has been the world leader in resettling refugees until now. This immigration ban will also prevent up to 500,000 permanent U.S. residents (who have green cards allowing them to be here legally) from coming back to America if they leave the country. And legal permanent residents are often citizens in waiting!

It is an order of incredible cruelty and blatant discrimination, and it made me furious. The order is already harming immigrants, and most of those affected will be Muslims. The New Yorker reported on a Yazidi refugee called Nada who is now stranded at the airport because of this rule. Talking Points Memo observed that Trump has shut down a program intended to help refugees from Iran, leaving about 300 non-Muslim Iranians stranded who were hoping to find refuge in America. They are Jews, Christians, Bahais, and now they are in grave danger. Iraqi refugees, including a man named Hameed Kahlid Darweesh, who helped U.S. troops have been detained and separated from family members! Iranian students who hope to study in the U.S. will have their dreams crushed, and U.S. technology companies have started recalling their foreign workers. Samira Asgari, a 30 year old Iranian woman was on her way to the U.S. to begin a postdoctoral fellowship in genomics at a hospital, but she was prevented from boarding her flight in Germany. A Sudanese doctor named Suha Abushamma, who works at the Cleveland Clinic, has been forced to leave the country.

When I attended Reed College several years, one of my friends was an Iranian-American. She was born here, but her family members were immigrants, and much of her extended family lives back in Iran. She likely will not be able to visit them now, nor will they be able to visit her. Some of my other friends are proud Muslims from Bangladesh who have family here in America; will they be able to work here and come visit their family members?

This afternoon, I went to Dulles International Airport to show my support for refugees, immigrants, and green card holders. I came away pleasantly surprised and inspired. While I thought there would be some people there protesting the executive order, I had no idea there would be so many, or they would be so organized, or that such important folks would visit.

I arrived at about 2 PM, and already there were at a couple hundred people who had gathered at the entrance for international arrivals. About two dozen police officers had cleared a path; people of all races and religions and ages lined the path holding signs in English, Arabic, and possibly Farsi. They loudly cheered when people arrived and came through the doors, and the people responded with smiles, high-fives, and fist pumps. Dozens of ACLU observers in blue vests and lawyers offering free legal aid were present. A whole bunch of organizations were there, including people from Case de Maryland (a Latino group), the National Iranian-American Council, and various Jewish organizations. They also had food and drink for volunteers, and some of the people had been there for a while.

Yesterday people at Washington Dulles were held for hours—they were people with student visas, work visas, and green cards. People with green cards were being detained, possibly about 50-60, but that didn’t include a newly arrived flight from Istanbul, and some Iranian green card holders were released. The lawyers were attempting to get in touch with people being held through family members who were allowed through. They urged folks not to sign anything. And lawyers apparently still aren’t being allowed to see the detainees, even though a Virginia judge has signed a restraining order requiring Customs and Border Patrol to let the lawyers in!

I spoke with a couple of attorneys; Customs and Board Patrol won’t let anyone back there, or even confirm that they are detaining green card holders at all. If they are holding people, they are almost certainly in contempt of court, and that is illegal. Since CBP is maintaining a complete media blackout, no one knows how many people are being detained, but we know there are still some.

The protesters and lawyers wanted to welcome immigrants above all. Some of the best signs were “Trump Is Not America,” “Immigrants Make America Great,” and “Banning Immigrants Is Un-American.” The crowd chanted, “No hate, no fear, refugees are welcome here!” and “let them in?” A Sikh woman and a man with an elaborate turban were especially delighted to see us. Other women wore headscarves, and a Jewish man held a poster with a yellow Star of David and the words “We remember. No Muslim Ban.” One protester had a sign with the words, “We turned Anne Frank away in 1939 due to national security.” That is sadly true; her father applied to come to the United States, was denied, and Anne Frank was killed in the Holocaust. Will modern-day refugees from Iran and Syria and Iraq suffer similar fates?

A couple of Iranian American immigrants talked about how they came as refugees years ago, that this order was discrimination, and how they wanted to stand up for those like them. Others held signs quoting Emma Lazarus’s poem “The New Colossus,” which welcomes immigrants and which is on the pedestal of the Statue of Liberty.

After an hour, four Representatives arrived and gave an impromptu press conference. Representative Don Beyer of Virginia (D-8) recounted how his grandmother fled oppression and poverty in northern Ireland. He declared that “today we are all refugees! Donald Trump would paint over Emma Lazarus’s words on the Statue of Liberty…Yesterday was a day of shame.” Beyer concluded that CBP must obey the law and follow the judge’s order.

Representative John Delaney of Maryland (D-6) spoke next. He was even more determined and stressed that “this is bad, this is evil, this is un-American.” No one should be denied entry based on their religion or nationality. Representative Jamie Raskin of Maryland followed (D-8), saying that Thomas Paine wanted America to be “a haven of refuge” and that we should strive to follow his words. I talked with Raskin briefly afterwards, and he told me that the representatives tried to see the detainees, but Customs and Border Patrol would not let them. I think if CBP is doing that, they are breaking the law.

More people were gradually arriving at the protest and filling up the area. While the immigration authorities and police were not giving out any information, the protesters and lawyers were determined and showed no sign of giving up. They held up signs and asked people coming through if they had seen people being detained, and if they had come on the flight from Istanbul. Neither side has backed down so far.

The pictures of this policy were shameful: an Iranian couple in their 80s being denied entry, kids being detained, and people being trapped overseas. Vox.com and CNN have reported that the Department of Homeland Security originally said that this order wouldn’t affect green card holders. But Steve Bannon, the anti-Semitic, Islamophobic, and racist man who ran Breitbart and is now Trump’s chief strategist, personally intervened to make sure that it would impact them. When Bannon ran Breitbart, his website featured routine stories of horrible crimes committed by immigrants, and emphasized that immigrants were undesirable (even legal ones). This means that the order’s harm to immigrants and Muslims is not a bug, it’s a feature. Bannon likely wants this, and it is our duty to stop him.

Emma Lazarus became a strong advocate for immigrants in the late 1800s after working with them, and her words are still read by millions of people today. Her welcome of immigrants is an example of American ideals at its best. She would be appalled by Trump’s xenophobic, bigoted, narrow-minded executive order. But she would be proud of all the people rallying to welcome immigrants, refugees, and green card holders, and of the opposition that has risen up. A myriad of organizations, including the American Jewish Committee, the New York Times, the National Immigration Law Center, and many, many public officials have spoken out. Democratic Minority Leader Senator Chuck Schumer called the executive order “mean spirited and un-American,” said it “must be reversed immediately,” and vowed that Senate Democrats will quickly introduce legislation to overturn this.

We Americans have not always lived up to the ideals of welcoming immigrants and “lifting our lamp beside the golden door.” But when we have, millions of people have found homes and refuge in America, and created thriving communities that have enriched our nation and created a beautiful mosaic. The spirit of Emma Lazarus is in large part responsible for that, and it is calling on us to fight this order with every fiber of our being. Whether it is through protest or lawsuits or speeches and writings or legislation or civil disobedience, we must fight these policies, and in doing so welcome the huddled masses and honor the Mother of Exiles.

Michael DeLong: The Spirit of Emma Lazarus--From the Dulles Airport Protests Against the #MuslimBan #RefugeeBan

On Friday President Donald Trump signed executive orders dealing with immigration that caused this weekend to turn into chaos, and that will harm hundreds of thousands of people. He suspended all refugee admissions to the United States for 120 days, slashed the U.S. refugee quota for 2017, and barred all entry to the United States for nationals of seven countries—Iraq, Iran, Libya, Somalia, Sudan, Syria, and Yemen.